More than 380 college aviation students descended on Don Scott Field at Ohio State University to compete in the annual National Intercollegiate Flying Association (NIFA) National Safety and Flight Evaluation Conference (SAFECON) May 9 to 14. These enthusiastic and impressive flight students represented 27 schools and aviation colleges from across the United States. Flight teams flew to the Columbus, Ohio, campus from as far away as San Diego and San Jose, California, and competed in 23 flight and ground events. 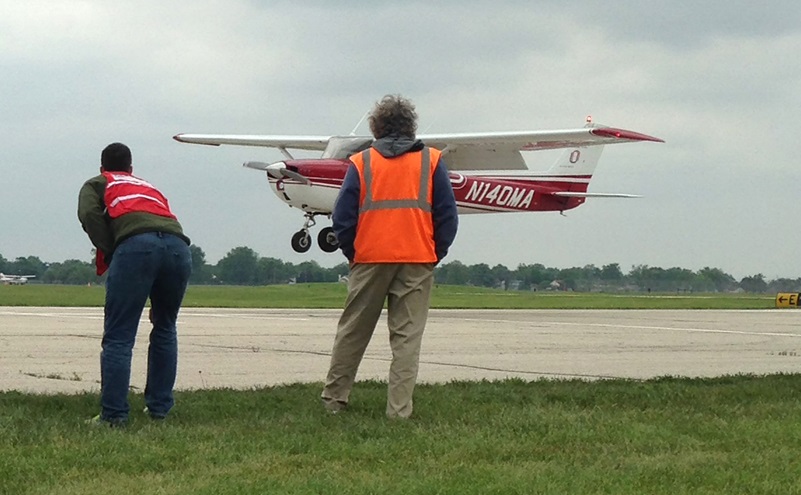 Embry-Riddle Aeronautical University's team from Prescott, Arizona, won the national championship trophy with a total of 500 points, the highest in the team’s history. It was the Golden Eagles Flight Team’s eleventh national title. Liberty University of Lynchburg, Virginia, won the Grover C. Loening Trophy for outstanding all-around college aviation program, and Liberty also won the American Airlines Safety award. Nick Moore, a rising senior at Embry-Riddle-Prescott and captain of his flight team, won the top pilot trophy with 93 individual points (out of a possible 100 points). He was number one in top scoring and soft-field landing categories. “I am very happy to have received top scoring contestant and top pilot awards. However, I would not have been able to do so without my team members and mentors who pushed me throughout the past three years,” said Moore. “It takes a team to put up 500 points and win a championship, and this group really pulled through.” Full results are available on the website.

Students compete in a variety of events including ground-based activities and flying tests for individuals and teams. They are judged on their expertise in flight planning, simulator flights, navigation, interviewing, preflighting, precision landing contests, power-off landings, and other aviation-related tasks. The more than 90 judges are representatives from competing schools, most of whom are alumni who competed in SAFECON while they were in school.

This was the eleventh year that Ohio State University has hosted the SAFECON event. It coincides with the university’s 100-year anniversary of its aviation program and the seventy-fifth anniversary of Don Scott Field.

“NIFA competitors, along with their coaches and advisers, are absolutely some of the finest aviation professionals that I have ever had the pleasure to associate with during my career,” said Richard G. Smith III, NIFA executive director and former NetJet executive. “The competitors’ tenacity is infectious, their capabilities are superior, and their integrity is beyond reproach. During my career in jet aircraft flight operations, I’ve learned to recognize certain traits that are indicative of an individual’s capability to make the right decision at the right time. These SAFECON competitors demonstrate those traits day in and day out.”

NIFA "was formed for the purposes of developing and advancing aviation education; to promote, encourage and foster safety in aviation; to promote and foster communications and cooperation between aviation students, educators, educational institutions and the aviation industry; and to provide an arena for collegiate aviation competition," according to the association's website.

The 2018 SAFECON event will take place at Indiana State University in Terre Haute next spring.