Get the app Get the app
Already a member? Please login below for an enhanced experience. Not a member? Join today
News & Media Texas teacher, students praise AOPA aviation curriculum

Science, technology, engineering, and math (STEM) aviation concepts engaged McKinney High School ninth-graders in lively dialogue as they huddled in a Texas classroom to determine which turn-of-the-century aviation pioneer first attained powered flight—Orville and Wilbur Wright or Gustave Albin Whitehead. “I’m going with the Wright Brothers,” declared student Aryn Esmair, who considered but quickly dismissed Whitehead’s claim to have flown a body-shift-controlled steam-powered aircraft about 25 feet before it crashed into a Pittsburgh building in 1899. 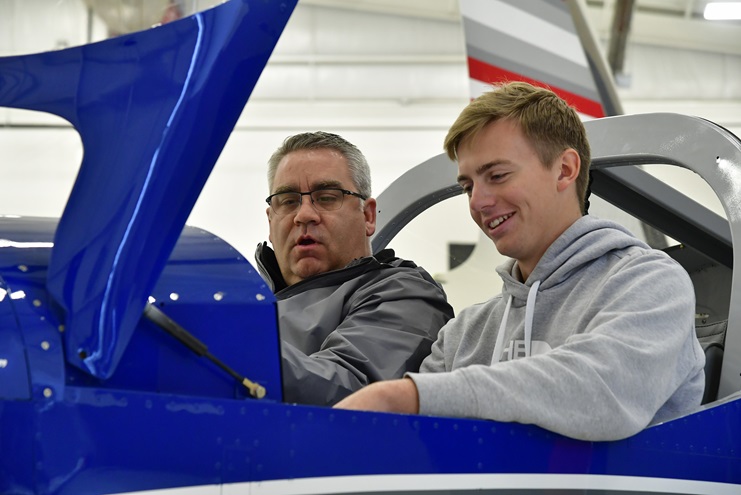 The banter between aviation teacher Nathan McAfee and his students was frank but informative as they discussed the pros and cons of a lesson associated with AOPA High School Aviation STEM curriculum. The students in McKinney, a Dallas suburb, were part of 29 high schools field testing the ninth-grade STEM lesson plans across the United States.

McAfee, who attended the AOPA High School Aviation STEM Symposium, in Fort Worth, Texas, Nov. 6 and 7, said he was “very impressed" with the curriculum. He noted that students were engaged as they learned critical STEM skills that could lead some into an aviation or aerospace career. “I was energized by the symposium,” McAfee added, “and I’m excited about where our program is headed.” 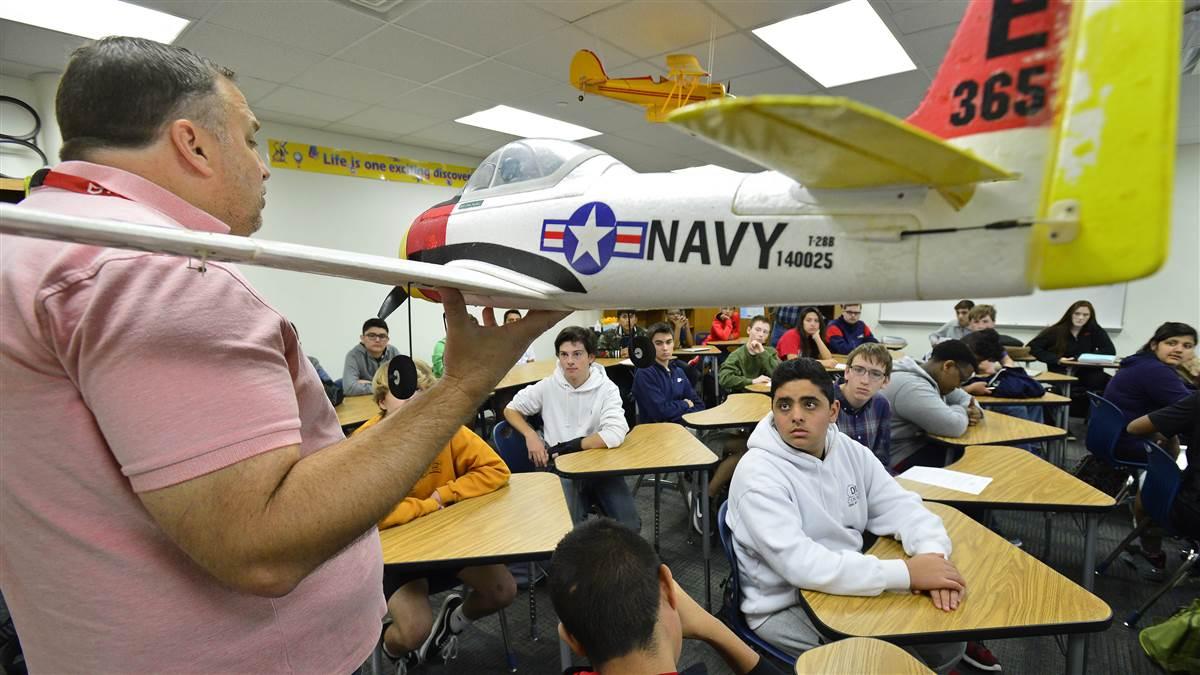 He explained that “flying is great but for every person flying there are probably 40 others who are helping to support them” in other aviation-related fields.

Branna Barrows, a sophomore in McAfee’s class whose father flies a Cirrus, said she enjoyed the experience of learning aviation concepts in a fun and engaging manner. Other students were impressed with field trips to airports that included a nearby airshow.

AOPA recognizes the importance of growing the pilot population and has put several programs in place to ensure a robust future for aviators. The goal of AOPA’s You Can Fly High School Initiative is to help build and sustain aviation STEM programs and to provide a quality workforce to the aviation industry.

Juniors and seniors participating in the public high school’s aviation academy meet in a hangar at McKinney National Airport rather than at the school so they can hammer, rivet, wire, and plumb aircraft during hands-on sessions that keep them tinkering well into the afternoon and on many weekends. A four-year preparatory program enables them to also study aviation history and careers, build and fly model aircraft, earn their student pilot certificate, and more.

Pilot and mentor Chuck Wilson patiently explained to eleventh-graders how they could determine which side of a wing rib a rivet should be driven into. A Cessna 150 in desperate need of TLC provided the backdrop as six students gathered around the aluminum structures that would one day become airborne again. “We’re trying to just create a sense that these kids can do anything" they put their hearts into, explained the air transport pilot and experienced aircraft builder. “They don’t have to be pilots and they don’t have to be mechanics. The goal is to let them understand there’s no limits as to what they choose to do and it’s really rewarding to give them that chance.”

He said McKinney students pursuing aviation have a “great opportunity” because they can train in the economical two-person Van’s Aircraft RV-12 that fellow students completed (under supervision) in 2016 and then flew to EAA AirVenture in Oshkosh, Wisconsin. “It’s fabulous [for training] and at very little cost to them.” 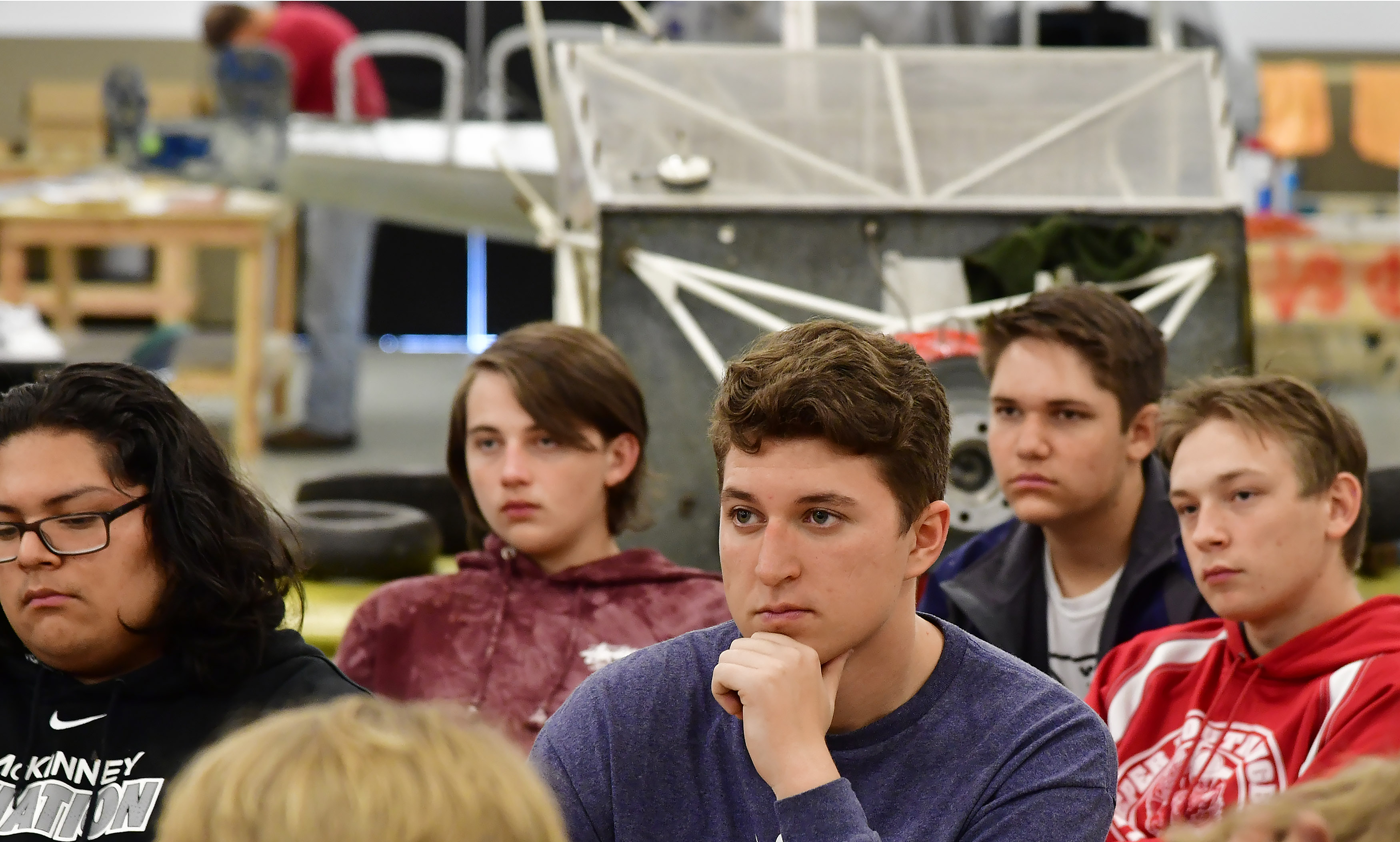 The aircraft build was partly funded by the students themselves and was conducted with mentors from the Eagle's Nest Projects. When a second aircraft currently under construction is complete, the first RV-12 will be sold to continue funding the program. Students across the United States have built 17 Eagle's Nest RV-12s with four more under construction, according to builder and mentor Phillip Campbell.

Gabriel Hatton, a third-year student who “always kind of had a passion for math and science,” explained that he valued the school’s aviation program for teaching him a variety of skills that empowered him to pursue his dreams. “It told me that I can do almost anything I want to do if I put my mind into it.” He advised younger students interested in aviation to “stick with it because it will pay off.”

Student Sean Rose also helped construct the blue-and-white RV-12, and he learned a lot about himself in the process—though he wasn’t too keen about certain parts of the fabrication process. Shaping the aircraft’s fiberglass pieces “during 10-hour days when school wasn’t even in session made me all itchy and it was just awful.” The senior stuck with it, though, and realized that “nothing is impossible. As a high school student coming in and [hearing] people say that you are going to build an airplane, you kind of just think to yourself, ‘That’s not going to happen.’ But now looking at the finished product it’s just incredible to see what we could all come together and achieve.”

Rose and classmate Bryan Soltys-Niemann planned to continue their aviation dreams together. They have both applied to the same colleges with hopes of being roommates and helping each other pursue professional aviation careers.

“In middle school, I decided that I wanted to become a pilot,” said Soltys-Niemann, as he buffed the leading edge of the aircraft he helped build. “I had to take at least the first year [of aviation classes] to see how it’d go.” He ended up in the right seat of the RV-12 for the six-hour flight from Texas to Oshkosh, Wisconsin, and noted that the trip taught him a lot about real-world aviation. A key takeaway was learning how to “prep ahead for the next airport and then decide on a go, no-go decision” because the next airport might not be in VFR conditions.

Although there were setbacks and frustrations that could rattle any aircraft builder, Soltys-Niemann said participating in the high school aviation program was “definitely a one-of-a-kind experience and one of the best experiences you’ll ever have if you put your best effort into it.”

He advised other high school students interested in learning about aviation to “just keep on trying and never give up.” 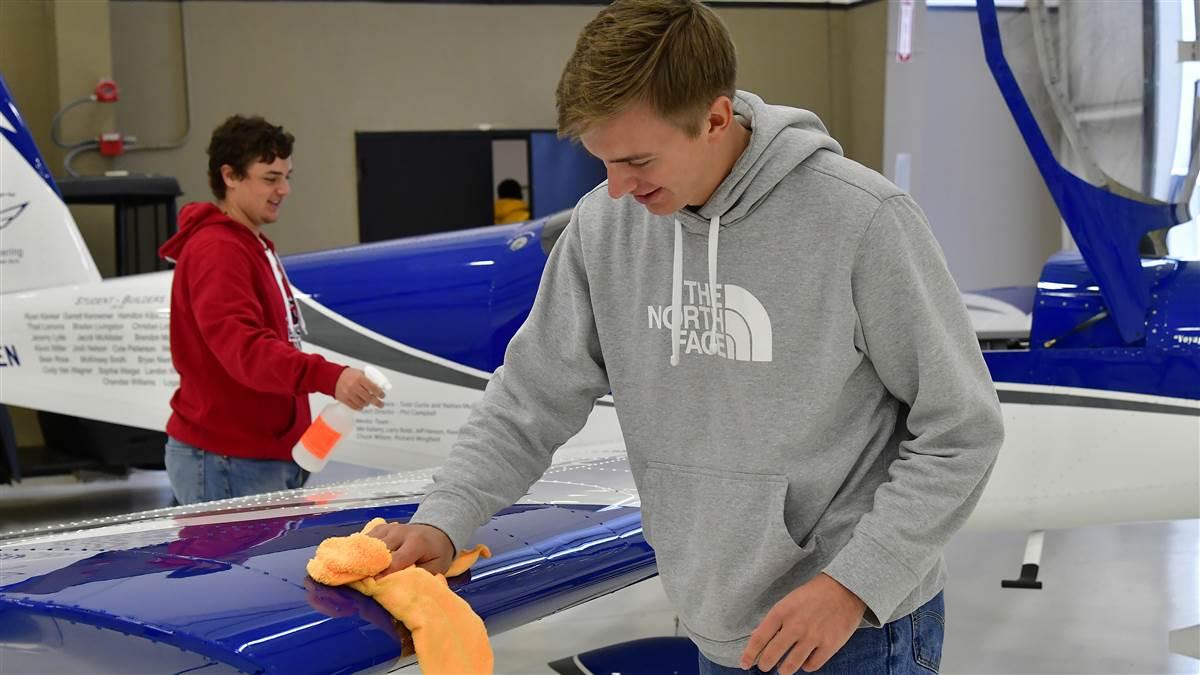