Get the app Get the app
AOPA will be closed July 4th, in observance of the Independence Day holiday. We will reopen at 8:30 am ET on Tuesday, July 5.
News & Media App could deliver IFR clearances to mobile devices 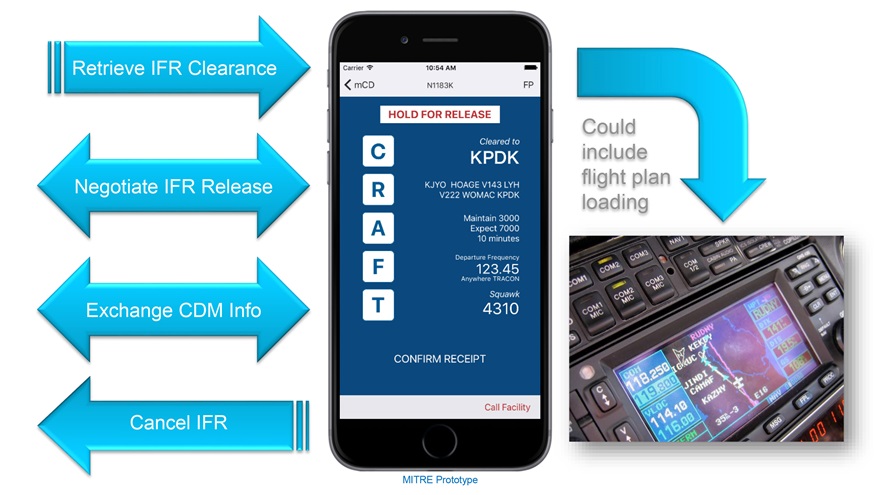 The prototype app shows the potential to reduce pilot and controller workloads, save time, and lower the likelihood of clearance-readback errors, according to its developer.

The app is being developed by MITRE Corp., the not-for-profit organization that conducts federally funded research in defense, intelligence, aviation, homeland security, and other areas.

A 2017 industry consensus report on the Performance Based Navigation Route System, and a set of recommendations issued in 2016 by a user group studying the future of flight service both called for improvements in how IFR clearances are delivered to general aviation aircraft, AOPA noted in a letter to the FAA urging field tests to be conducted as soon as possible.

According to a video-illustrated briefing on the prototype app in development by MITRE Corp.’s Center for Advanced Aviation Development, obtaining an IFR clearance from a nontowered airport today by phone or radio can take several minutes, and, the spoken clearances may contain names of fixes that the pilot might misspell when copying the clearance.

Text-based clearances provided by the app avoid such misunderstandings and save time consumed when a pilot must clarify spellings. With the clearance in hand, the pilot can request a release with the app, providing the runway to be used and an estimated time of departure.

At that point, ATC’s app-based depiction of the flight status changes to “awaiting release.” ATC also can expand its view of flight data to see the cleared route and a display of the countdown to the requested departure time, as shown in the video.

Next, ATC would use the app to issue a release time, a release-void time, and any additional instructions. Having completed those steps, the controller would click “approve release.”

The MITRE Corp. briefing lists several accidents and unsafe events that occurred in connection with clearance difficulties, and notes that the app offers safety improvements over such practices as pilots departing visually into marginal weather conditions, and attempting to receive an instrument clearance when airborne.

It says time and fuel savings would come from the pilot being able to coordinate engine start with a clear release time, from reduced workload, and from “reduction in the need to relay clearance” through flight service.

Efficiency improvements would include a reminder to the pilot to close the IFR flight plan, and the app’s capability to show ATC the aircraft’s position on the airport.

Another benefit would be the app’s capability to create “a real-time, traceable record of the clearance transaction,” the briefing says.

The app is in development at a time when MITRE Corp. estimates that more than 15,000 clearances are being read daily at towered and nontowered airports, and 75 percent of pilots are using portable or mobile devices for aviation purposes.

AOPA’s letter noted the widespread use of mobile devices by pilots as a reason for its strong support for the app. AOPA added that another reason to speed development of the technology is that many of those pilots fly airplanes lacking the costly equipment necessary to participate in the FAA NextGen program’s Data Communications service—technology that supplements voice communications with digital text-based messages.

“We encourage the FAA to field test the MITRE app as soon as possible given the benefits it could provide to pilots and air traffic controllers. AOPA stands ready to support such a project,” the letter said.

Dan Namowitz has been writing for AOPA in a variety of capacities since 1991. He has been a flight instructor since 1990 and is a 35-year AOPA member.
Go to Dan Namowitz's Profile
Topics: Advocacy, NextGen, Navigation