Editor's note: This article was updated Oct. 6 to clarify that the NTSB has not established the altitude at which the Sept. 21 collision took place, and previous references to altitude may have been inaccurate. AOPA regrets the error.

NTSB investigators have tracked down and interviewed the pilot of a DJI Phantom 4 quadcopter that was destroyed in a Sept. 21 collision with a U.S. Army Black Hawk helicopter flying at low altitude just off the shoreline of Staten Island, New York. The collision damaged the helicopter and required the Army crew to make an emergency landing. 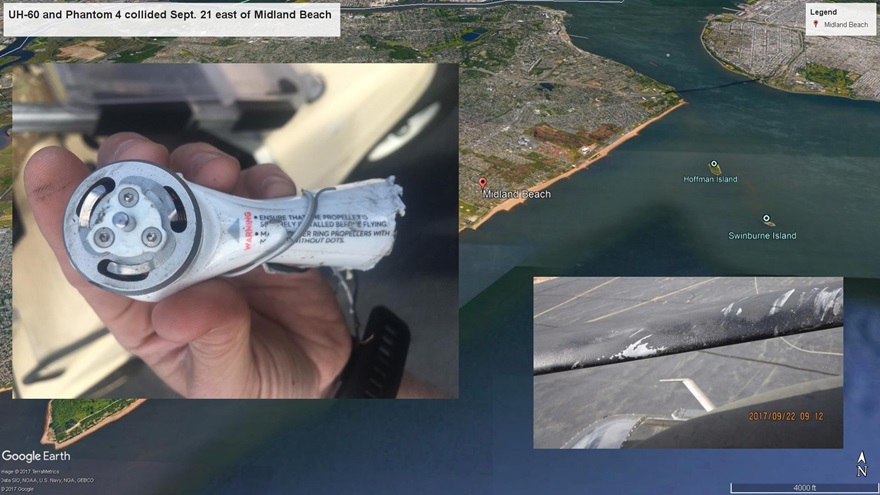 The NTSB is investigating the Sept. 21 collision of a DJI Phantom 4 quadcopter and a U.S. Army Black Hawk helicopter east of Midland Beach on Staten Island at 500 feet. Google Earth base image with FAA photos overlaid.

The agency reported Oct. 5 that the drone pilot has provided flight data that will assist in the safety agency’s first-of-its-kind investigation of a midair collision involving manned and unmanned aircraft.

The NTSB dispatched investigators on Sept. 22, the day the agency was notified of the collision, which took place around 7:20 p.m. on Sept. 21 as the helicopter was flying just east of Staten Island, New York. Initial published reports stated the helicopter was flying at 500 feet, though an NTSB spokesman said Oct. 6 that investigators have not established the altitude at which the collision took place. The Army helicopter was operated by the 82nd Airborne Division, and was one of two Black Hawks assigned to a security patrol during the United Nations General Assembly. The NTSB announced Oct. 5 that the motor arm recovered from the helicopter after the incident was identified as belonging to a DJI Phantom 4, and investigators were able in the days following the incident to identify and interview the Phantom’s pilot, who has turned over flight data from the drone.

Drone maker DJI also is participating in the investigation, along with the FAA. The Army also is conducting its own investigation, and reviewing procedures for similar patrols over populated areas in the future. NTSB spokesman Eric Weiss confirmed that this investigation is the agency’s first probe of a collision involving a small drone and a manned aircraft.

Weiss said that DJI provided information that was instrumental in identifying the pilot of the drone, though he was not able to answer many questions about the details, noting that the investigation remains at a preliminary stage.

“The investigator did do some shoe leather reporting,” Weiss said.

According to previous published reports, the UH-60M Black Hawk landed safely at Linden Airport in New Jersey following the collision, and damage to the main rotor required blade replacement. The Army confirmed soon after the incident that a drone had collided with one of its helicopters.

A temporary flight restriction was in place to protect the U.N. gathering of world leaders, and the NTSB noted that FAA documents related to the TFR have been collected as part of the investigation, along with air traffic control radar data, and flight data from the helicopter.

The FAA is meanwhile awaiting recommendations from an aviation rulemaking committee composed of industry representatives and advocates (including AOPA) working to reach consensus on new regulations to facilitate remote identification and tracking of drones. The FAA also has recently imposed new restrictions on drone flights around 10 U.S. landmarks, a list that could grow as officials continue to evaluate security concerns.

Weiss said that the NTSB investigation will likely require the same amount of time to complete, 12 to 24 months, as required for other types of aviation accident investigations.