Get the app Get the app
Already a member? Please login below for an enhanced experience. Not a member? Join today
News & Media Pilots rush to aid storm victims

Editor's note: This story was updated with additional information about approaching Hurricane Irma and continued disaster relief efforts in Texas in the wake of Hurricane Harvey.

Pilots are playing key roles in relief efforts for thousands displaced by Hurricane Harvey, a storm that dumped more than four feet of rain on the Gulf Coasts of Texas and Louisiana. Meanwhile, as the next major storm, Hurricane Irma, ravaged the Caribbean and prompted frantic preparations in Florida, the nation's "Hurricane Hunters" patrolled and probed that Category Five monster to help forecasters and emergency managers more accurately predict how it might affect Florida and the East Coast. 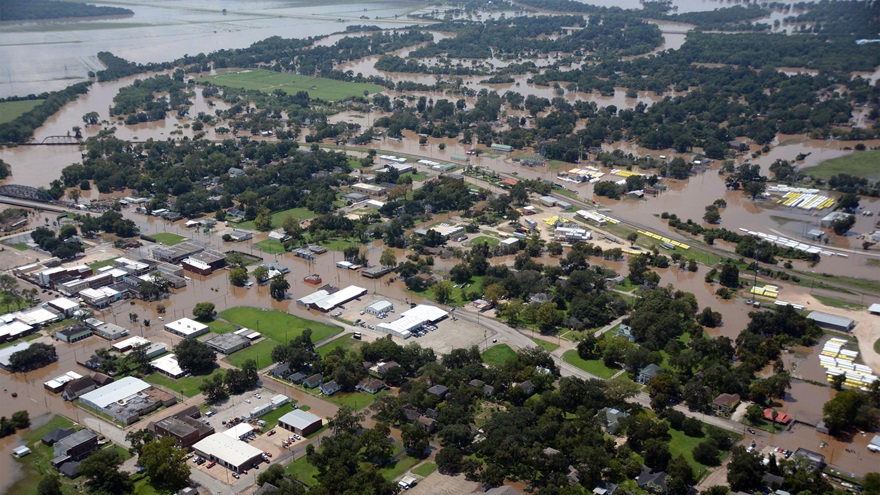 A Civil Air Patrol aerial assessment photo in the aftermath of Hurricane Harvey shows heavy flooding from the Colorado River in and around Wharton, Texas. Photo courtesy of the Civil Air Patrol.

Swollen creeks, rivers, and bayous had begun to recede as Hurricane Irma began ravaging Caribbean islands, leaving Gulf Coast residents mired in muck with thousands of homes, businesses, and vehicles damaged by the storm that made landfall as a Category Four hurricane Aug. 25, and again as a tropical storm Aug. 30.

Hurricane Irma, one of the most powerful Atlantic Ocean storms ever recorded, continued to churn toward the U.S. mainland with millions of people at risk in Florida and the surrounding region. As the storm veered north toward the aviation-rich state, aircraft owners were running out of time to relocate.

AOPA Insurance Services Vice President and Director of Operations Jim Pinegar said that relocation is the best option when facing a storm of Hurricane Irma's magnitude and potential to devastate. He advised aircraft owners to “check their insurance policy because many carriers offer financial assistance to move an aircraft out of the path” of an approaching storm. “The policy will detail the qualifications and how far of a move is required, but most offer something to help relocate.”

After a storm, Pinegar advises pilots to take “reasonable steps” to prevent further damage to aircraft, and said photos are helpful.

“Take pictures, lots of them! They’ll be very useful in the event of a claim.” Pinegar said pilots should make sure they have the correct airport contact information so claims adjusters can determine if an airfield is accessible immediately after a storm. Above all, Pinegar preached patience, because insurance carriers often need to contract with third-party salvage and storage companies. “The problem is that all the other contractors are competing for the same resources” as buildings and infrastructures are tested, assessed, and noted. 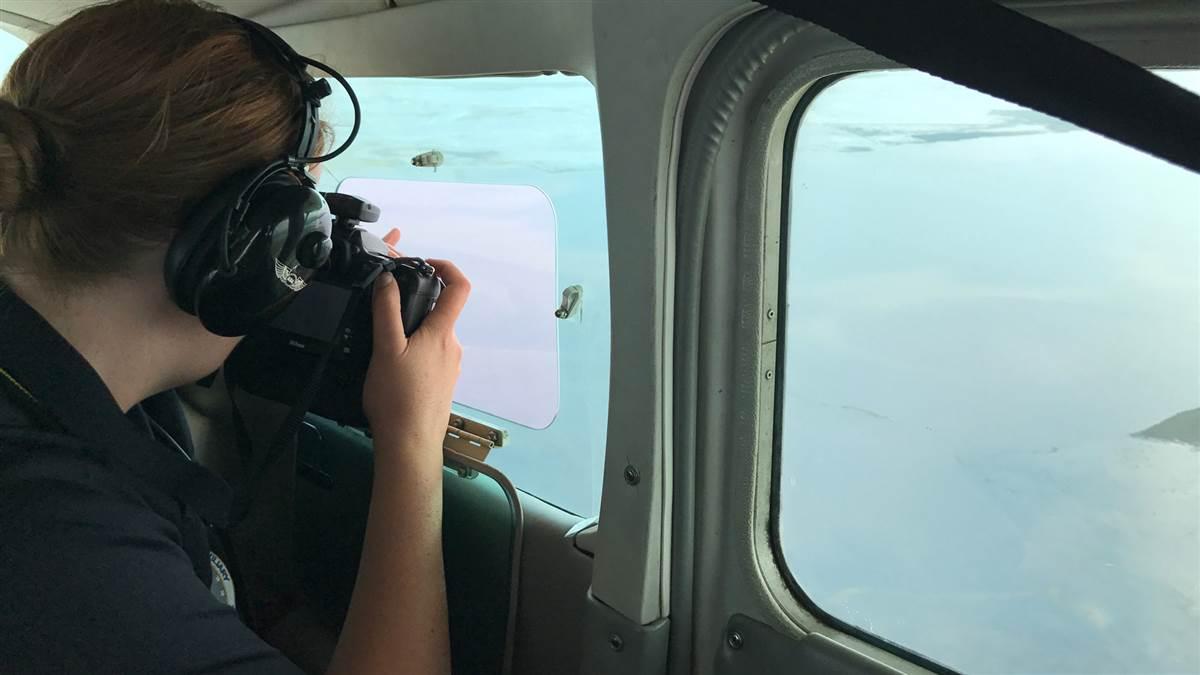 Piper Aircraft’s Jackie Carlon said the Vero Beach, Florida, aircraft manufacturer had buckled down and employees were prepared for the approaching storm. “If you’re asking if we’re ready, the answer is 'heck yeah,'” she told AOPA by telephone. “The factory is made with concrete blocks and it has a flat roof like a bunker,” she explained. “We got the certified airplanes out of here already, including an M600 that went out Tuesday.” Employees recently participated in a hurricane preparedness drill and were “bracing for a worst-case Category Four storm” with several employees planning on sheltering in the giant facility rather than their homes. “The bulk of the aircraft in the factory are either a work in progress or nearing certification. We have 22 airplanes here and they’re stacked like cord wood,” she noted. “If the eye can just stay out a little bit it won’t be so bad.”

Avionics manufacturer Avidyne Corp. posted an online advisory alerting customers to the facility’s temporary closure until after the hurricane threat passes. “ Due to the anticipated impact of Hurricane Irma, our Melbourne, Florida, office and manufacturing facility will be closed Friday 9/8 & Monday 9/11,” the note read. “During this time, we will have no technical support available. We will return all messages as soon as we reopen and are able. Stay safe!”

Mike Zidziunas, of the Lakeland Aero Club in Lakeland, Florida, wrote to AOPA via email that the club secured its own aircraft into a hangar “as well as a couple of planes from some of our supporters. Lakeland Aero Club members will be helping Sun ‘N Fun put 68 planes from coastal flight schools into their four large hangars.” He noted a bright side to the massive hurricane churning toward Lakeland Linder Regional Airport: “It's very cool having the NOAA Hurricane Hunters based here in Lakeland. We have been watching them come and go” on their missions into the Atlantic.

Lakeland also might become a staging ground for AERObridge, an organization that acts as a clearing house for most GA volunteers and has been instrumental in previous national and international relief efforts, after Hurricane Irma passes Florida.

Meanwhile, AERObridge's Alan Staats said its operations had picked up for the hardest hit areas of Texas, which included Beaumont and Port Arthur, which were virtually cut off by Hurricane Harvey. AOPA has committed resources on behalf of GA to help fund AERObridge's efforts and plans to assist the organization with its efforts in Texas, Louisiana, Florida, and elsewhere during the hyperactive late-summer hurricane season.

“We have an airlift scheduled for Saturday morning flying school supplies into Port Arthur,” Staats wrote via email from the Signature Aviation staging area at Austin Municipal Airport. “As of last night [Sept. 6], we had 25 confirmed aircraft participating” and he was expecting more. He complimented AOPA members for donating their time, aircraft, and resources during the massive Hurricane Harvey cleanup effort. In fact, he noted that donations to the staging center nearly overwhelmed volunteers sorting and packaging the supplies so AERObridge arranged for a moving van to help store all of the goods.

“We can only offer our most sincere thanks,” he wrote to the association and its pilot members, whom he categorized as “great.” 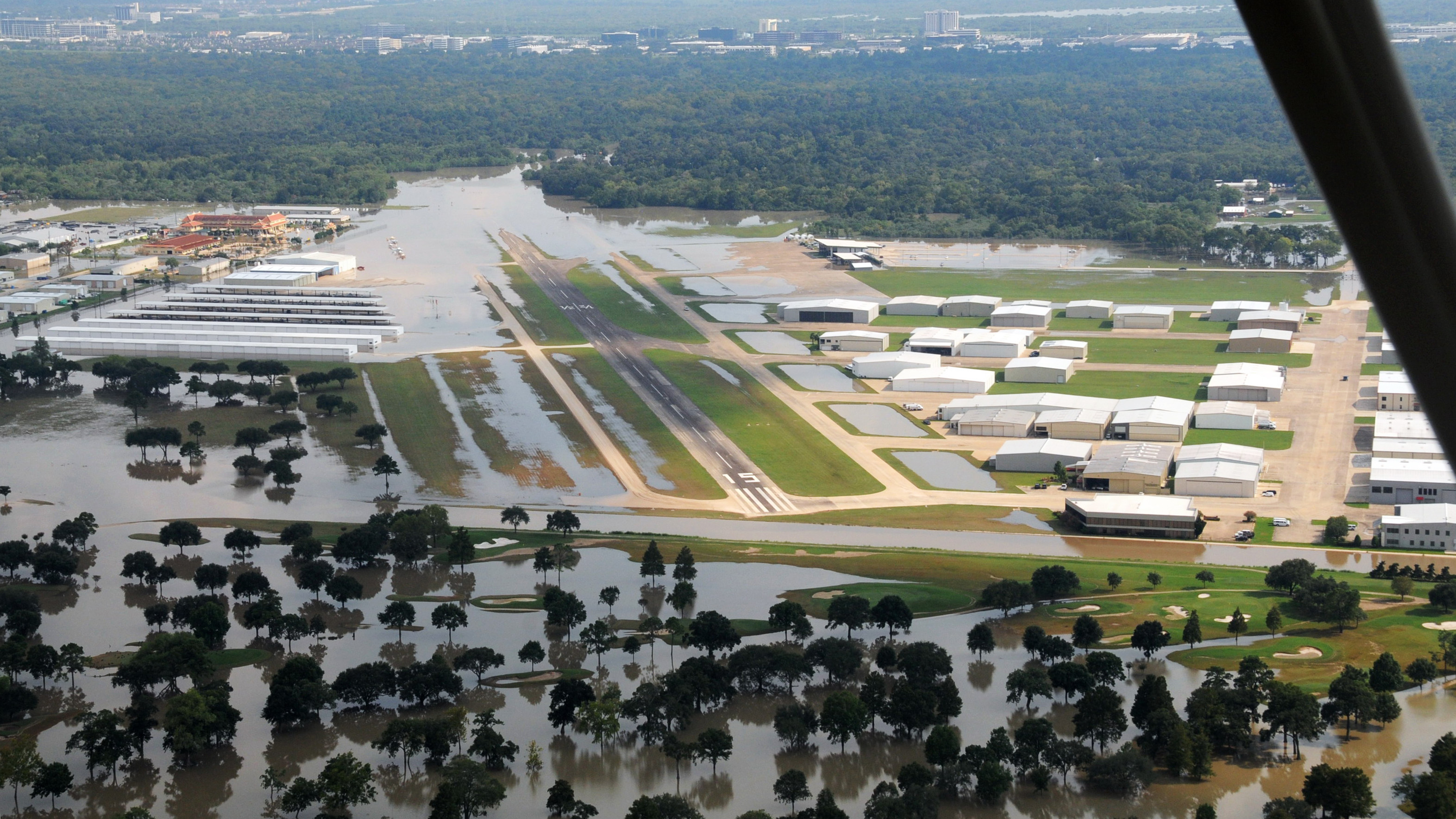 Private pilot Charley Valera assisted AERObridge as the organization's field director for Massachusetts and New England states. Valera, who also helped with Hurricane Sandy relief in 2012, directed GA volunteers in “aircraft from Skyhawks to a Falcon 900” that were lined up to deliver supplies to Texas airfields.

"We were constantly texting, emailing, and calling the pilots and our ground support team," explained Valera, who coordinated the Falcon's mission to “pick up about 5,000 first aid kits and deliver them to Dallas.”

When the Beaumont, Texas, water supply system was shut down, Army Reserve aviators from the 7-158th General Support Aviation Battalion stationed in Conroe resupplied the parched town. An anonymous donor provided “three semi-trailers full of bottle water to relieve water shortages,” according to a U.S. Army news release. The emergency shipment was loaded onto CH-47 Chinook helicopters for delivery, and television news crews documented lines of motorists pulling into the staging area after aviators delivered the welcome supplies. 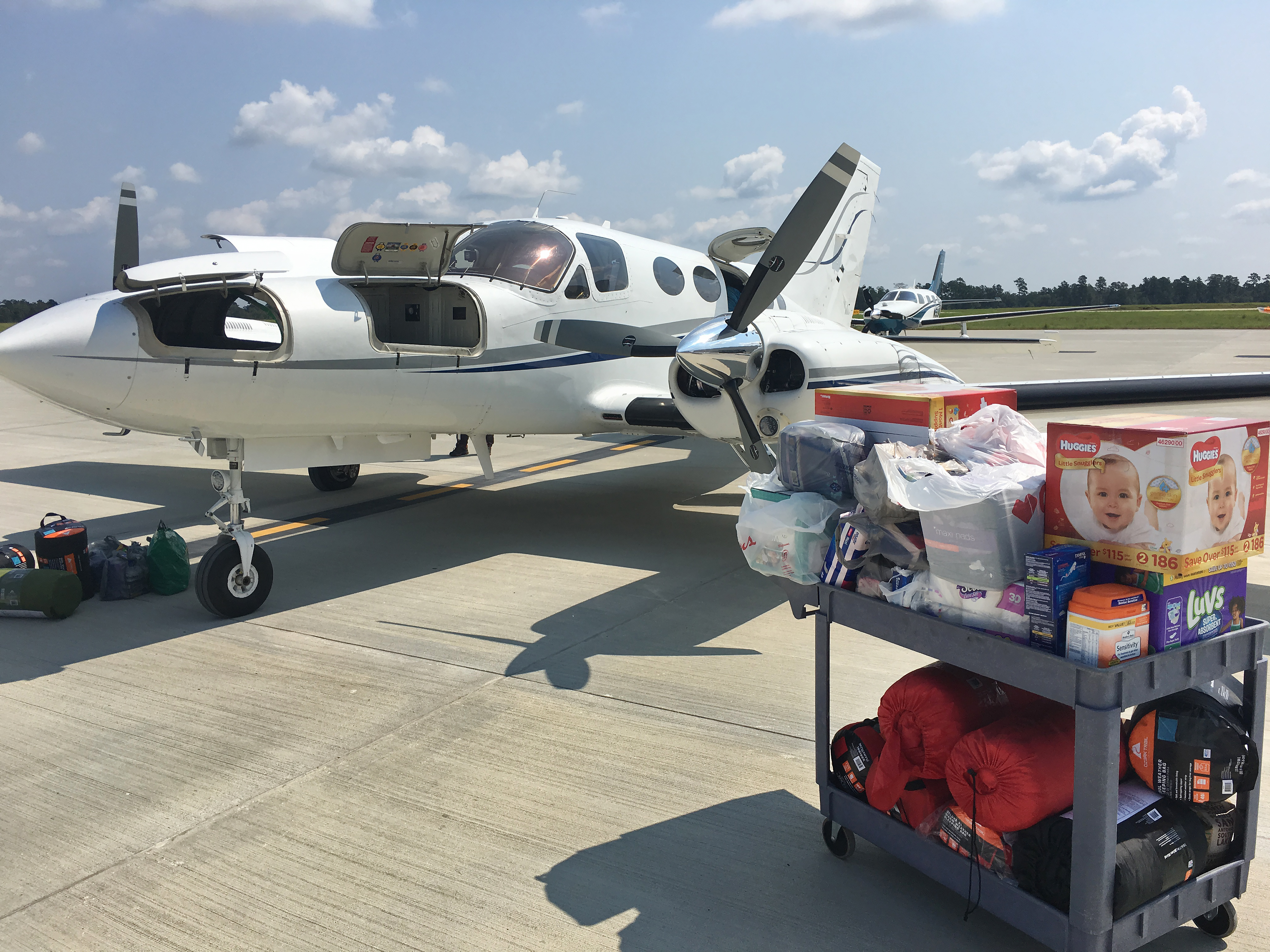 GA pilots contributed to Operation Airdrop, a crowd-funded, grassroots rescue organization that sprung up in Harvey's aftermath. According to organizer John C. Wolfe, the goal is to transport supplies to "harder to reach communities along the Texas Gulf Coast."

The group is an aviation version of the often-seen "Louisiana Cajun Navy," and it has a robust Facebook following. Donation centers were to be set up in a five-state regional area for drop-offs and donations. The organization works with the Salvation Army and other volunteer groups to get basic necessities to those in need, and it can provide air transportation for residents, doctors, and others.

Texas Twin Cessna pilot Robert Johnson is one of many pilots who rushed to join Operation Airdrop and he has performed several missions transporting people and supplies into hurricane-ravaged Texas towns.

“The operation in Georgetown is truly amazing,” wrote Johnson. “I've never seen anything like it. You show up in your plane, they ask you how many pounds you can take, and they bring a pallet over to your plane from a hangar that has about the same amount of inventory as your average Costco" discount store. Other pilots including former military aviator Larry Brown have joined the effort, which has quickly grown to more than 150 members.

Angel Flight South Central, an organization that is no stranger to humanitarian relief efforts, answered the call to deliver potentially life-saving infant formula to newborns in a Beaumont-area hospital that was cut off by flooded roads.

The group noted in a news release that it has received support from the Air Charity Network, a national contingent of volunteers who provide resources including aircraft, fuel, and pilots for the group's mercy missions.

Jim Dell’s reaction was typical of the many volunteer aviators who have donated their time, aircraft, fuel, and other resources to help those in need. He and pilot Scott Young delivered infant formula and medicine to the Beaumont hospital.

“This was the greatest flight in 30 years of flying,” said Dell, a volunteer pilot from California.