Get the app Get the app
Get the latest news on coronavirus impacts on general aviation, including what AOPA is doing to protect GA, event cancellations, advice for pilots to protect themselves, and more. Read More
Already a member? Please login below for an enhanced experience. Not a member? Join today
News & Videos Drones support Texas search exercise

Horses, dogs, boats, and unmanned aircraft teams joined firefighters and law enforcement officers in Texas Feb. 3 to hone the skills of the Brazos Valley Search and Rescue organization. A fixed-wing drone's pilot spotted the first volunteer “victim” along the shore of Lake Somerville just six minutes into the exercise. 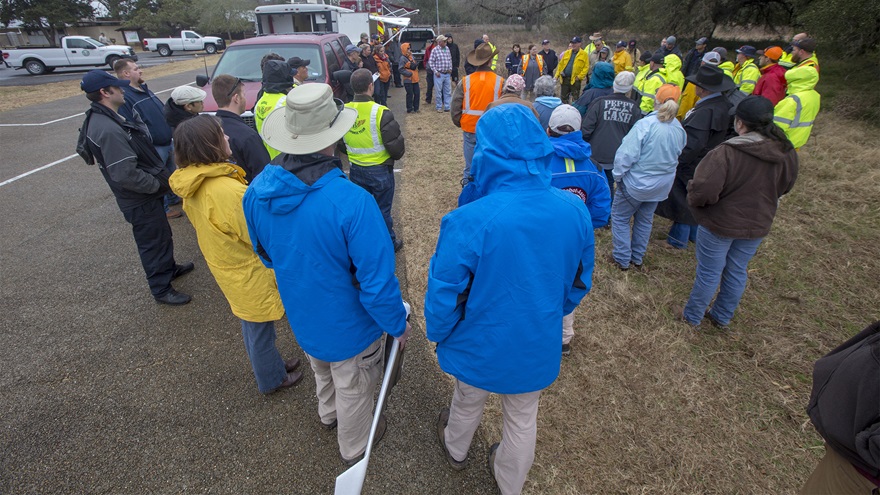 Search and rescue teams hold a debrief following a Feb. 3 exercise. The Parrot Disco deployed during the exercise (among other unmanned systems) is held by one of the CRASAR pilots (who are wearing royal blue jackets) at center. Jim Moore photo.

That Parrot Disco was flown by David Merrick of the Center for Robot-Assisted Search and Rescue, who would later note that luck played a significant role: He was flying solo and dividing his attention between aircraft spotting and on-screen display, and happened to be looking at the camera view at just the right moment as the Disco flew at 300 feet over the person pretending to be lost along the sprawling reservoir’s 85 miles of shoreline.

Elsewhere, dozens of rescuers had split up into teams to crawl through thick underbrush and comb the hiking trails on foot, backed up by trained search dogs and trained volunteers on horseback who all gather at the lake each year for the exercise.

Some of the firefighters also brought drones. The Bryan Fire Department began building its own drone team about a year ago, and now has 10 certificated remote pilots and four aircraft systems. That program was developed with assistance from CRASAR, the organization led by Robin Murphy, who has been working for years to study and promote the use of robots to assist in rescue and emergency response.

Working alongside the Bryan Unmanned Aerial Response Team and other local area firefighters and law enforcement officials were CRASAR pilots, including Jarrett Broder and Mike McDaniel of the Emergency Management and Homeland Security Program at Florida State University (which Merrick directs); Justin Adams (another member of CRASAR who has deployed to many actual disasters, including the hurricanes of 2017); Texas A&M University graduate students Grant Wilde and Jan Dufek, who are working with Murphy to develop and test aquatic robots; and this writer, who was embedded with one of the ground search teams to support their efforts with a quadcopter.

Covering an assigned area spanning many acres on foot, much of it covered in thick and thorny underbrush, required a bit of crawling. A machete would have been useful, though the responders took care to leave the state park as clean and undisturbed as possible. While many lessons have been learned through research and real-world disaster responses, implementing drone technology in the context of a search-and-rescue effort like this remains a work in progress, and the procedures and techniques are sometimes adapted or invented “on the fly,” so to speak. 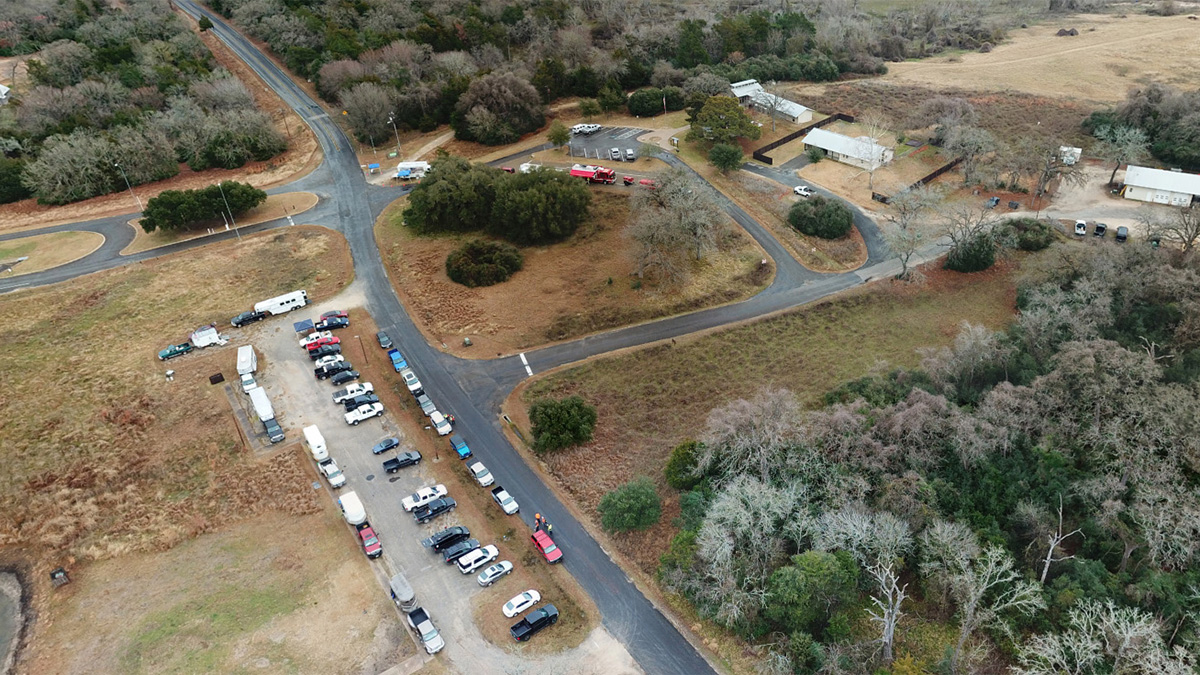 Some members of the ground team that this writer was embedded with had little or no familiarity with the technology, but seeing was believing. Being able to launch a small quadcopter from a small clearing amid thick vegetation, pop up, and take a look around helped the team leader direct the search party and choose  an optimal route. (I called this the “tactical periscope” mission).

In other parts of the search area with fewer trees and bushes, the drone was able to check and clear a larger area, flown in a spiral path extending out from the launch point. At 150 feet agl, the DJI Mavic Pro was well clear of obstacles, but still low enough to easily spot people. Keeping the camera at roughly a 45-degree angle was another key: The human brain is not well suited to interpret an image taken from a camera pointing straight down, Murphy has confirmed though her own research, though that perspective is useful when capturing images to create a photographic map, which can help incident commanders plan and allocate resources for a large-area search.

Flying over the shoreline, the Mavic was able to spot many man-made objects, and descend for a quick look to confirm the presence or absence of people in abandoned boats. Acres could be inspected in a matter of minutes. The Bryan Fire Department team used a thermal imaging camera mounted on a DJI Inspire that can quickly differentiate animals from inanimate objects, and spotted hogs and other wildlife in the area.

Not all responders have been as receptive as the Bryan firefighters when it comes to unmanned aircraft and boats, but the Feb. 3 exercise made believers out of a few—along with law enforcement personnel who also participated, and who peppered the CRASAR team with questions. Murphy said she could sense a shift in attitude, and a new willingness to implement technology, not as a replacement for people (or horses, or dogs), but as another tool in the kit, and a powerful one at that.

“I think this was a breakthrough,” Murphy said. “They’re really starting to see the value.”

Murphy, Adams, and Merrick have developed a five-hour online course through Texas A&M university that is designed as a primer for emergency response professionals on the capabilities and implementation of unmanned aircraft. Participants earn 0.5 continuing education unit (CEU) credits after completing the online modules. The course is self-paced, and assessments are graded every two weeks. Murphy said the $200 course fee is not intended primarily to generate income for the universities, or CRASAR (which recently became an independent, nonprofit organization), but the main purpose of charging a fee is to make clear to participants that there is real value in the lessons created from hard-won experience in real-world disaster response, as well as exercises and training. The hope, she said, is that students will invest the effort required to learn best practices, and take the technology as seriously as the researchers do.