As part of an ongoing initiative to ensure fee transparency, airport access, and competition for critical services at publicly funded airports, AOPA has announced an Airport Access Watch List of 10 locations where the organization believes fixed-base operators with monopoly positions may be preventing reasonable airport access with their pricing practices, potentially putting them in violation of FAA grant assurances. 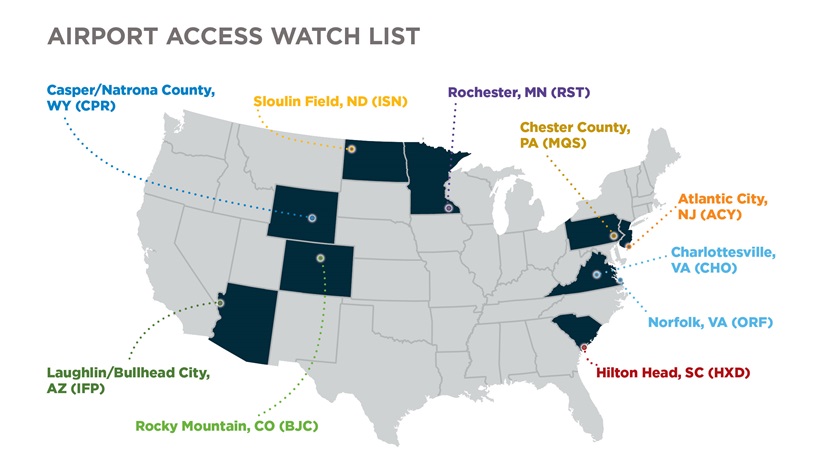 AOPA intends to contact each airport sponsor and begin a dialogue about the conditions for transient general aviation pilots to access these public airports. AOPA’s goal is to ensure that pilots are able to land and park at each airport without being forced to purchase services they do not use, want, or need.

There are several airports that have agreed with AOPA’s assessments on egregious FBO pricing practices, and some of those airports have unilaterally taken steps to correct these situations. We call them self-help airports, and they include Orange County, Waukegan, Syracuse, Santa Barbara, Heber City, and Cedar Rapids.

AOPA President Mark Baker said he and his team are looking forward to working with the airports and community leadership at these locations as they have done in other locations.

“The cooperation and steps these self-help airports have taken, along with the FAA guidance, provide a number of ways to approach the problem and ensure access is reasonable,” Baker said. More on these self-help locations can be found on AOPA’s website.

Over the past year, our research team has been gathering data on a large number of airports across the country, including the number of FBOs, ramp access and control, changes in numbers of operations, and the various costs pilots might face, among others. To develop the Watch List, AOPA focused on certain factors indicative of access concerns, particularly those airports with only one FBO. In addition to the FBOs’ pricing practices and ramp access control, AOPA’s Watch List locations were chosen from the top 50 most complained-about airports, based on the more than 1,000 complaints we have received.

These locations all fit a certain profile," said AOPA General Counsel and former Department of Transportation Inspector General Ken Mead. “They are not necessarily the worst in any specific category, but a collective set of indicators shows us there likely is an issue.”

The Watch List airports are all very similar to the locations where AOPA filed Part 13 complaints in 2017, two of which are still outstanding with the FAA. They all have one FBO that effectively controls all available GA ramp space and requires pilots to purchase fuel or services that they may not need or want. All 10 airports on the newly announced Watch List have received federal funds from the Airport Improvement Program and are thus subject to FAA grant assurances. Each of the FBOs at these airports also have transparency issues, in that their fees are not easily accessed online.

Most Watch List locations have seen declining operations compared to other airports, especially in piston aircraft, but there are outliers in turboprop and jet operations.

The airport on the list with the steepest decline in piston operations is Laughlin Bullhead International Airport in Arizona at 59 percent over the past decade. And Laughlin’s 49-percent drop in jet operations was the second worst on the list.

According to data collected by AOPA, upon landing at Laughlin, a Cessna 182T pilot would immediately see a $5 infrastructure fee and another $29 fee for handling that can be waived with purchase of 10 gallons of $5.41 full-service avgas. Self-service avgas is not available at Laughlin. Meanwhile, a Pilatus PC–12 would immediately face a $206 handling fee, waived only with a 90-gallon fuel purchase, and a separate $25 infrastructure fee.

Turboprop operations at all airports dropped by 6 percent, but at Watch List airports they actually increased by 27 percent. That’s because Sloulin Field International Airport in North Dakota skews the data.

Sloulin’s sponsors are also building another airport to meet demand associated with the so-called North Dakota Oil Boom, and Sloulin is likely to be redeveloped. Mead said, “We see Sloulin as a ground-up opportunity and look forward to speaking to local leaders about protecting general aviation access at Sloulin Field, while it remains open, as well as the new airport being developed to meet capacity.”

In terms of the price of a quick-turn stop, probably the worst offender on the Watch List is Atlantic City, New Jersey. A Cessna 182T would see a $10 (airport imposed) landing fee, along with FBO fees including a $5 infrastructure fee, and a $44.07 handling fee that could be waived with purchase of 10 gallons of $5.67 full-service-only avgas.

Not surprisingly, Atlantic City also experienced the steepest decline in turboprop and jet traffic of all Watch List airports over the past 10 years.

Casper, Wyoming, has the only Atlantic FBO on the list; the other nine are Signature Flight Support locations. Atlantic is owned by the Macquarie Group, which is based in Sydney, Australia. Signature’s parent company, BBA Aviation, is publicly traded on the London Stock Exchange in the United Kingdom.

At many of these locations, the existing FBOs have monopoly positions, frequently making it difficult for other FBOs to set up business on these fields. Mead said, “It’s not just pilots who want access to public airports, other FBOs want to offer their services. The free market means giving consumers options and companies a chance to compete.”

Mead reiterated that most of the nation’s FBOs do a great job of providing reasonably priced services at the airports they serve, but at certain locations, the businesses take advantage of their positions to charge excessive fees, and they fail to make it easy or even possible for pilots to assess in advance what they will pay. “Our goal is to engage with these Watch List locations and show them how they can be more welcoming to GA pilots and be in compliance with their FAA grant assurances. At those locations where we don’t see progress, we will consider other options, including additional formal complaints to the FAA if necessary,” Mead said.