Learning to train with electric airplanes

Four Pipistrel Alpha Electro two-seat trainers have arrived in California, and flight instructors have begun a painstaking process of testing their capabilities, and figuring out the details of how electricity will power the next generation of flight instruction. 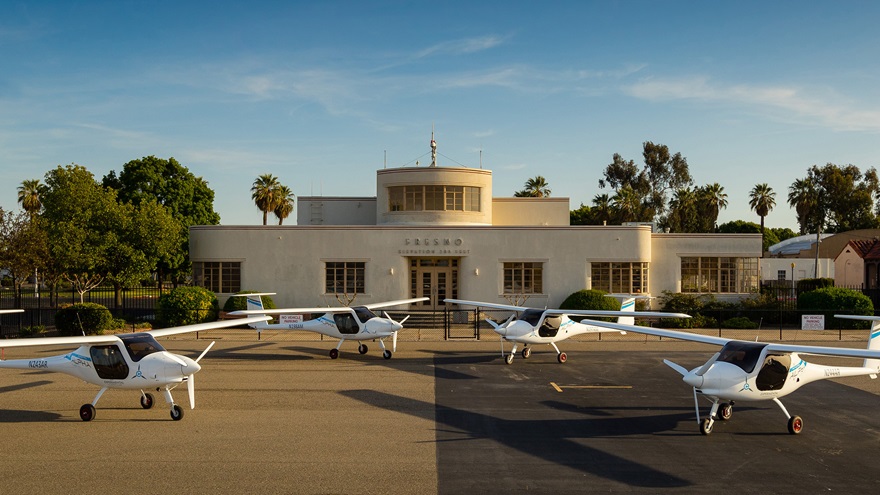 Four Pipistrel Alpha Electro aircraft are now being tested in California's San Joaquin Valley, with the goal of validating electric propulsion in the flight training environment. Officials celebrated their arrival April 17 with a ceremony at Fresno Chandler Executive Airport. Photo by Douglass Fletcher Sisk, courtesy of the Sustainable Aviation Project.

Joseph Oldham, a pilot, AOPA member, and director of the CALSTART San Joaquin Valley Clean Transportation Center, explained in a telephone interview that it took some time to get those airplanes and the charging infrastructure that supports them into Fresno County, and nobody is in a rush to put them on a training flight line. The Sustainable Aviation Project secured a $1 million grant in 2016 to begin building a network of charging stations, hangars, and a flight training program that includes scholarships to support low-income students.

Oldham said it took some time to get the Pipistrel aircraft shipped from Europe, in part because, for reasons not fully understood by the recipients, the cargo ship in question sailed east and took the long way around the planet, by way of the Suez Canal rather than the Panama Canal.

“We kind of joke and say all our airplanes are world travelers,” Oldham said.

Now that this quartet of electric trainers is in California, they are being flown by instructors under experimental category airworthiness certificates. The plan is to ultimately offer sport pilot training and secure FAA approval under light sport aircraft requirements, but the current LSA requirements preclude use of electric powerplants. Oldham said the FAA has been cooperative and receptive, but work remains to be done to establish a regulatory framework for electric aircraft to be used for flight instruction. There is an upside to that, he noted: Even if these airplanes were already approved for use in flight training, the first instructional flights would still be months away.

“This is giving us plenty of time,” Oldham said. “We’ve got to validate how we actually use the charger network … how long it takes to really charge up an airplane … we’re getting local CFIs familiar with the airplanes and what it’s like to fly an electric airplane.”

Work is also underway to establish an independent, nonprofit entity that will manage flight operations, maintenance, infrastructure, and other aspects of the flight instruction program to be offered including management of scholarship awards. In the meantime, Oldham and his collaborators look forward to learning how airplanes powered by batteries and 80-horsepower (60-kilowatt) electric motors perform in California’s summer heat.

“We’ve got a lot of learning to do,” Oldham said. “We want to make sure ... that we know how to use them safely… that the CFIs are comfortable.”

Electric aircraft are brand-new to the flight training environment, and there are precious few such operations around the world to learn from. Oldham said the Sustainable Aviation Project has benefited from all of them, including regular exchanges of emails and videos with an Australian flight training operation that recently began testing its own Alpha Electros, along with a private owner in Canada who is flying his own for pleasure and sharing what he learns along the way. Oldham said Pipistrel has also been very supportive, not just with technical information but prompt service: A mechanic was dispatched from Colorado to repair minor damage that two of the four aircraft sustained during the three-month ocean voyage to California.

The Fresno County cities of Reedley and Mendota are also every bit as enthusiastic about the project as ever, Oldham said. (These communities were instrumental in securing the grant of public funds from the Fresno County Transportation Authority that made the project possible.) Oldham said that an April 17 ribbon-cutting ceremony at Fresno Chandler Executive airport drew about 70 people representing every municipal and state agency involved in the effort.

“This project brought a lot of people together,” Oldham said. “We’re very thankful to the supporters that we’ve had.”

Oldham said the project is running under budget, and two of the four airports (Fresno Chandler Executive and Reedley Municipal) where charging stations were originally planned now have that critical equipment in place. A third will be installed at William Robert Johnston Municipal in Mendota, and the fourth may go mobile. Oldham said that the original plan to install that charging station at Fresno Yosemite International was put on hold (it is a busy Class C airport, and less conducive than the others to conducting flight training in electric aircraft), and that fourth charger may wind up on a vehicle that can be dispatched to any number of airports, extending the cross-country range of an aircraft currently expected to support one-hour flights with a 30-minute reserve. Oldham said the development of multimodal charging stations will likely be useful to electric ground vehicles as well, another aspect of the collaboration that will help make transportation sustainable in many forms.

Oldham said the team is also following other developments in electric aviation closely, including the progress being made by Bye Aerospace in Colorado, which recently celebrated a successful first flight of the Sun Flyer 2 prototype. Those efforts, among others, will also contribute to the collective knowledge base that will one day make electric trainers commonplace on flight school lines around the world.

“Our goal here is, of course, to validate electric propulsion in aircraft,” Oldham said, noting he is “very excited” to see Bye Aerospace marking its own development milestones. “It’s really kind of a community thing.”