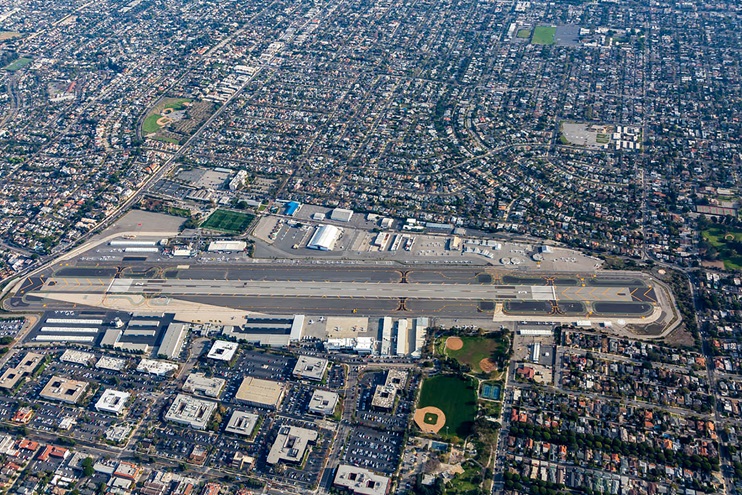 The Alquist-Priolo Earthquake Fault Zone maps published in January identify areas “within Los Angeles and Napa counties, and affect the cities of Beverly Hills, Culver City, Los Angeles, Napa, Santa Monica, Vallejo, and West Hollywood,” said the agency, the primary source of geologic information relied on by state government, business, and the public. The Alquist-Priolo Earthquake Fault Zoning Act—passed after the devastating San Fernando Earthquake of Feb. 9, 1971—bars human occupancy structures from being placed on active faults, according to the California Department of Conservation.

“What strikes me is how these active faults are in the middle of the most populated area in California and how a large earthquake there could immobilize and isolate large sections of the Los Angeles Basin,” he said in an email. “Imagine an 8.0 earthquake and every freeway interchange within 30 miles destroyed. The airport could be a lifesaver resource for bringing in emergency workers and medical staff, for running a food airlift, for evacuating people to places where they could be sheltered or given medical treatment, and for distributing much needed food and water to residents who found their grocery store shelves empty due to the inability to get any food trucks into the area.”

Marshall cites the role the Watsonville Municipal Airport played in relief efforts after the 6.9 magnitude Loma Prieta earthquake of 1989 as a model for general aviation’s valuable role in earthquake relief.

Through the efforts of volunteer pilots flying from the airport, nine miles from the earthquake’s epicenter, “much suffering and misery was avoided,” he said.

A critical but threatened resource

“This is another warning call to the city of Santa Monica that it needs to protect, not threaten its airport,” said AOPA President and CEO Mark Baker. “These latest fault maps reinforce that it is not a matter of if but when the city will be impacted by a significant earthquake. The destruction of this critical infrastructure will not serve the citizens of Santa Monica well when crisis strikes.”

Even though Santa Monica Municipal Airport has been identified as “critical infrastructure” for the city’s disaster relief planning, local officials have pursued a long effort to shut down the airport—over AOPA’s vigorous objections.

Emergency response pilots have been undeterred: In January 2017, AOPA reported on the first disaster-relief drill held at Santa Monica Municipal Airport. It simulated a response to a major quake that made major roads impassable and even reduced the usable length of the airport’s runway to 2,000 feet. Marshall said the volunteers “just hit the ball out of the park” with their exercise.

The disaster-response exercise, conducted by a local Disaster Airlift Response Team, or DART, highlighted that disasters “are local problems managed by local emergency response managers,” Marshall noted at the time in his capacity as the California Pilots Association’s manager of the statewide program to build a network of DARTs.

The practice run was conducted with awareness that scientists give the Los Angeles area a 60-percent probability of experiencing an earthquake of magnitude 6.7 within 30 years.

“Santa Monica Municipal Airport and the local volunteer pilots of the Disaster Airlift Response Teams would play a crucial role in any recovery efforts,” Baker wrote in his April 2017 President’s Position column in AOPA Pilot, "Next Steps in the Fight for Santa Monica."

Since then, the city of Santa Monica and the FAA entered in secret into an agreement that would allow the city to close the airport by 2028—an outcome AOPA and other aviation advocates are continuing to oppose by supporting GA-friendly candidates for the Santa Monica City Council, and other advocacy strategies.

If the city succeeds in closing the airport, it will lead to more development in the region.

“Santa Monica does not need more congestion on its streets, and it doesn’t need any more high-rises built atop earthquake faults. This critical airport needs to remain open to serve the public when a natural disaster occurs. DART’s leadership and the support of local pilots are helping to prepare for the inevitable. The city should be supportive of those efforts for the good of all its citizens,” Baker said.

In December, as part of the secret agreement, the city shortened the Santa Monica Municipal Airport runway from 4,973 feet to 3,500 feet.

Although the reduction in the runway’s length has curtailed some airport operations, a real-life emergency response operation modeled on last January’s drill likely would be unaffected, because the drill proceeded on the premise of a runway reduced by earthquake damage to a usable length of 2,000 feet.