Get the app Get the app
Already a member? Please login below for an enhanced experience. Not a member? Join today
News & Media Aviators' wedding photos amid warbirds dazzle

Mindy and Kevin Lindheim landed in the aviation community's limelight after sharing stunning images on social media platforms from their 2017 hangar wedding amid historic and other aircraft. A highlight was their dramatic wedding reception arrival at Space Coast Regional Airport, which included the bride—in a full wedding gown and special white sparkling shoes—alighting from a Cessna Skyhawk while the DJ played Danger Zone from the film Top Gun. 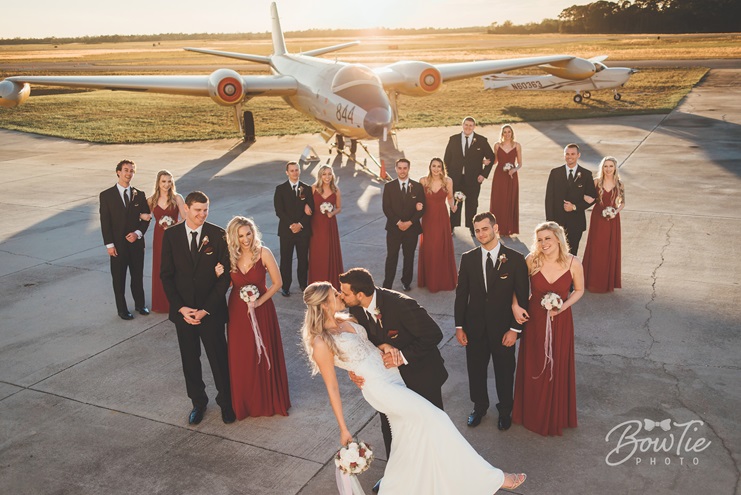 The husband-and-wife BowTie Photo team of Zach and Lauren Glenn documented the Cessna 172 arrival, the exchange of vows in front of a jet fighter’s air intakes, and a newlywed portrait near a Boeing Stearman.

Planning the wedding “wasn’t something that was all served up on a silver platter,” Mindy told AOPA, “but we decided to go for it.”

The couple met while attending Embry-Riddle Aeronautical University and figured it was a natural transition to get married in an airport hangar surrounded by the things that meant the most to them—family, guests, warbirds, and jets.

They are very much alike. She is a flight instructor and a regional sales director for Textron/Cessna, and he is an Atlanta air traffic controller. They are both sports enthusiasts—she plays water polo and he plays baseball.

The romance began after a chance meeting at a minor league baseball game while they were in college. They sat next to each other and chatted about school, professors, and homework. That’s when the two realized they shared a class and things took off from there.

After they graduated, Mindy landed a job in Chicago and Kevin finished his training at the FAA’s Oklahoma City air traffic control academy. It briefly looked like they would have to turn their relationship into a long-distance situation before circumstances again aligned in their favor. He was transferred to Atlanta, and “it just so happens the Southern territory [for Textron] opened up at the exact same time,” she explained. “I had my dream job and we were so glad it worked out.”

Once they were in the same city, the next step was obvious. Kevin is a student pilot and Mindy is his instructor, so the first thing that came to mind for both of them was a hangar wedding, she explained. “We’re both very active so we don’t sit at home too much and it usually leads to an airport. That’s where we spend most of our time anyway, so it made sense.”

When it came time to plan the Thanksgiving weekend wedding, they chose Valiant Air Command Warbird Museum in Titusville because both families are from Florida. “They have these two huge hangars, but it’s not a traditional venue so I had to plan everything,” she explained. One hangar provided accommodations for the traditional wedding ceremony framed by an A-4 Skyhawk jet, and the other hangar was set up for a grand reception in front of a Douglas C-47 Skytrain.

The Lindheims chose every detail down to the napkins, table settings, and decorations. She said the museum staff was accommodating at every turn and the venue even came with an unexpected advantage: Guests were occupied with tours of aircraft and memorabilia when Mindy and Kevin slipped unnoticed across the airfield for their biggest surprise. Only her mother and the DJ knew—and they were sworn to secrecy.

“I traded in my heels for white sparkly sneakers by the time Mom got us to the other side of the airport,” she said. Spaceport Aviation owner Buck Crenshaw donated the use of a Cessna Skyhawk to the newlyweds, so they jumped in, cranked it up, and taxied to their reception for a grand entrance.

The only hang-up occurred during start-up when a nervous Lindheim, who trained on ERAU’s newer fuel-injected Cessna 172s, was briefly flustered with the manual primer on a 1976 Cessna 172M model. “I get in and see this primer thing and think, ‘What the heck am I supposed to do with that thing?’ Luckily the checklist was in the pocket.” With the engine cranked up, taxi clearance came next. “I said to Kevin, 'You’re an ATC guy, so I know you can do the radios.' But he’s a student pilot so I had to walk him through it.”

When the Lindheims taxied the Cessna 172 around the corner, the DJ switched the song to Danger Zone and the couple hopped out just in time to begin their first dance as husband and wife.

“Everyone went wild,” recalled Mindy, “it was the best thing ever. That kicked off our party and it was awesome.”

The event was stressful for the young aviators, but Mindy said she and Kevin exchanged high-fives when it was all over. “I think I’d regret it every day if I didn’t show up to my reception in an airplane.”