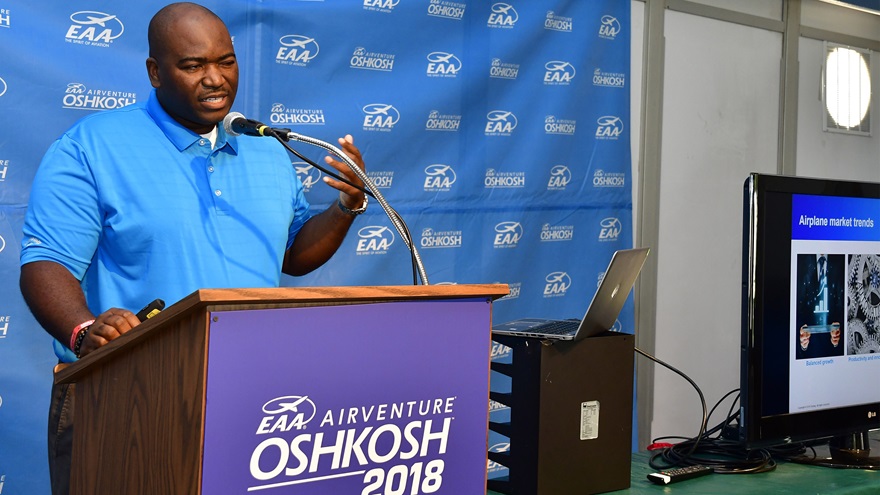 "In the U.S. alone, there are over 80,000 pilots who will retire within the next 20 years," said William Ampofo, vice president for Boeing Global Services, who released the Boeing jobs forecast during the first day of EAA AirVenture in Oshkosh, Wisconsin, July 23. He anticipated a doubling of the commercial aircraft fleet in the next two decades, helping drive demand for aviation careers.

The industry expects to fill a total demand for 790,000 pilots over the next 20 years, which includes 635,000 commercial pilots, 96,000 business pilots, and 59,000 helicopter pilots, the report noted. Data from business aviation and civil helicopter sectors were added to the projections for the first time, Ampofo said, "because everyone is pulling on the same resources—whether it's pilots, technicians, or crew."

Boeing's research indicated that while demand for commercial pilots was "holding nearly steady," maintenance technician demand decreased to 622,000 from 648,000—due to longer maintenance intervals for new aircraft—while cabin crew demand increased to 858,000, up about 19,000.

Despite the slight decrease, Ampofo said Boeing was "doubling down" on its investments in the pilot, maintenance, and cabin crew community "to support our aircraft" and he emphasized that he was "very excited" about the health of the industry. "Business and general aviation are a focus for us," he noted.

"We're here at Oshkosh for the general aviation enthusiast because we feel it's our job to play a significant role in the training, tracking, and encouragement of the next generation of aviators. We're really excited about what we’re able to do, and we're really pleased with this. When you get into the classroom environment and when students see something cool, they gravitate toward it," he continued. "We feel we’re in a cool industry. There's a way for us to bring this cool technology and make it real for the young people across the United States."

Carl Davis, the manufacturer’s chief pilot and director of air crew operations, said the industry needed to remain nimble and proactive as other opportunities open up for young people. He described the "poaching" of young people who are steered away from aviation jobs and into other careers. "We lose people to Walt Disney World, technology firms, and car manufacturers—and we’re going to have to look at scheduling and lifestyle as well. Aviation is a 24-hour business and that will drive some people away—but it also attracts other people." Davis said some of the shifts in aviation jobs are causing micro-shortages elsewhere within the aviation industry.

"We have to cast a broader net" to spur interest in high schools and other institutions "to develop the pipeline and training for the need that we have," Ampofo noted. He said many career aviators began their careers in GA and built experience along the way.

The Seattle-based aircraft manufacturer analyzes a combination of data sources to predict the future of aviation jobs. Ampofo explained that the pilot and technician outlook (PTO) represented "the global demand forecast for pilots, technicians, and cabin crew and it's based on the future fleet growth projections over the next 20 years." He said Boeing tabulates the current market outlook and marries it with the demand for aircraft. "Based on the fleet growth, the detailed aircraft utilization, attrition rate, and regional differences specific to certain aircraft types—the PTO estimates the number of pilots, crew, and technicians worldwide." Ampofo said the formula was "a little bit of art" mixed with science, "but it certainly is reared in fact-based data and some projective analytics that we’ve mastered over the years."

The jet-maker is a global player and an economic engine for the Seattle and Everett, Washington, area. When asked what would happen in the event of a tariff between the United States, China, or other countries that supply or buy from Boeing, Ampofo said he company was "keeping a watch on that" and he didn't expect to see an impact in the short term. "But for deliveries it certainly can do so," if the cost of raw materials drives up the price of an aircraft. He noted that Boeing has advocacy efforts underway "on the Hill to make sure our business interests" are addressed.

Ampofo was upbeat about the overall jobs forecast and said he was "really excited about the growth [of aviation]" especially as more young people investigate science, technology, engineering, and math pathways. "Most of our challenge is trying to keep pace with the growth that we have, and that’s a good thing."