Get the app Get the app
Get the latest news on coronavirus impacts on general aviation, including what AOPA is doing to protect GA, event cancellations, advice for pilots to protect themselves, and more. Read More
Already a member? Please login below for an enhanced experience. Not a member? Join today
News & Media Swift pilots celebrate museum’s golden anniversary

A diamond formation of Globe and Temco Swifts—the two-place speedster that looks fast sitting still—dropped low for a smoke-filled formation flight to help celebrate the aircraft’s heritage as cameras clicked and necks craned during the 2018 Swift National fly-in June 7 to 10 at McMinn County Airport in Athens, Tennessee.

AOPA President Mark Baker was along for the ride in Paul Mercandetti’s polished GC–1B, a shining example of the retractable-gear taildraggers manufactured from the 1940s to 1950s and supported by the Swift Museum Foundation.

He dropped in for a quick visit to help highlight 50 years of the foundation, the debt-free nonprofit that supports Swift aircraft owners with parts and technical help, formation flying clinics, a retail store, a museum of rare Swifts, and more.

Foundation president Jim “Frog” Jones, a Swift aircraft owner for more than 40 years, said taking Baker up in the aircraft was a highlight for many of the 43 Swift aircraft pilots who flew in to celebrate the model’s heritage during a four-day extravaganza at the museum’s home airport.

Jones said that formation flights, completion of the third and final phase of the museum, a raffle drawing with the winner in attendance, "and of course the fellowship with other Swift owners” resonated with fellow “Swifters” during the type club’s 2018 Swift National fly-in.

Attendees were kept busy with a formation ground school presented by Mercandetti’s wife, Sandy; a formation competition; spot landings and other flight skill competitions; an Automatic Dependent Surveillance-Broadcast forum; a raffle; an auction; a dinner banquet; and the Swift Museum dedication. 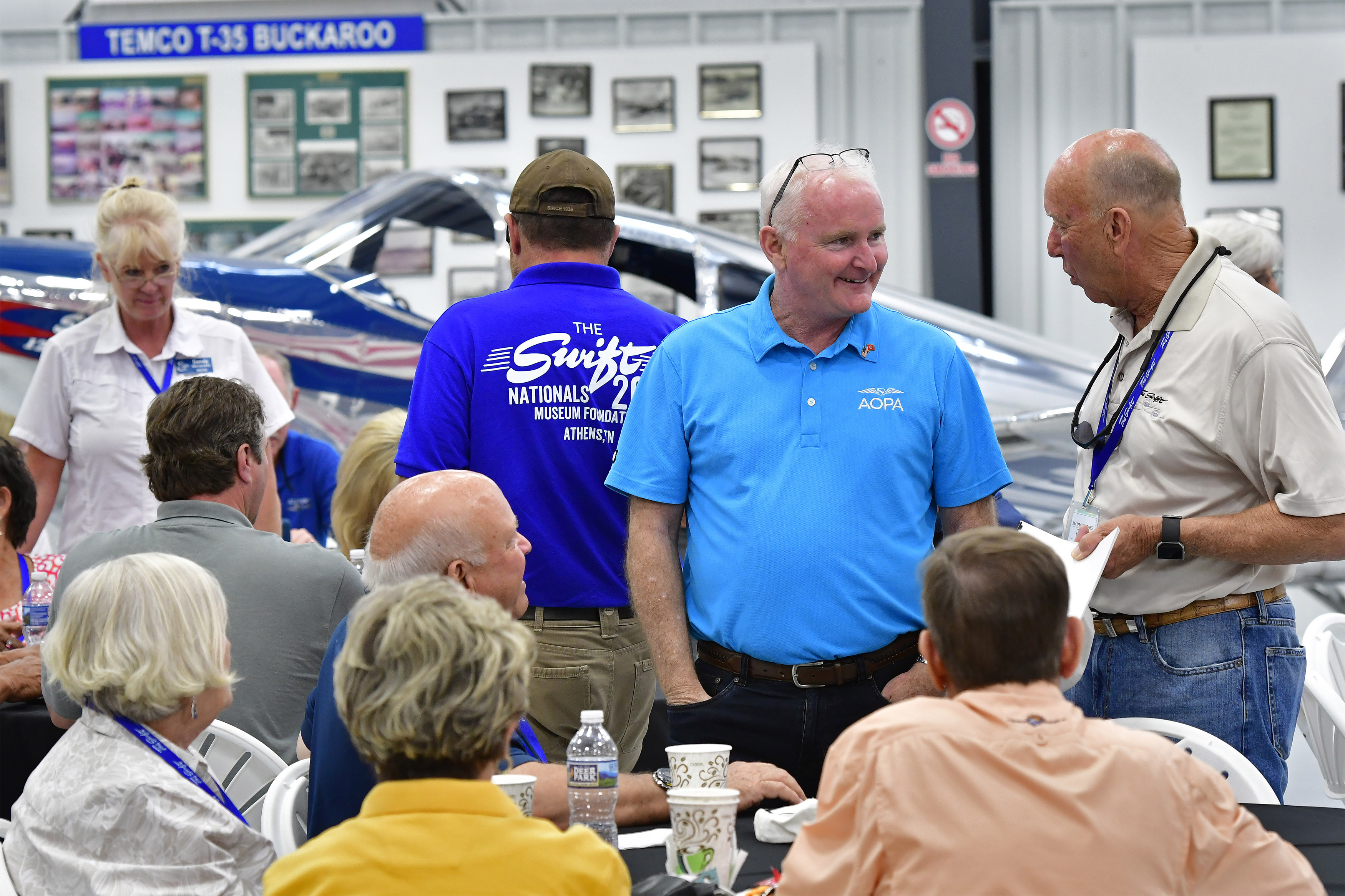 Museum visitors can view serial No. 2, an all-metal GC–1A model powered by a Continental C-90 parked next to a 125-horsepower GC–1B, the last of 1521 Swifts built. R.S. “Pop” Johnson’s fire-engine-red Johnson Rocket 125 prototype, manufactured in 1942 with a Lycoming 0-320 and derived in part from a Culver Cadet, shares museum space with two rare T–35 Buckaroos. Museum foundation members located the tandem-seat U.S. Air Force trainers in Saudi Arabia in the 1970s and retrieved them for posterity. Serial No. 3 is hanging up in the museum, forever poised in flight.

Pilots of the classic 70-year-old airframes are supported by the foundation, which owns the type certificate, engineering data, tooling, and an inventory of parts to keep them airborne.

Several years ago Swift pilots established the main hangar and display museum, and the latest addition includes a classroom to facilitate formation ground schools and other clinics. They created a formation instruction regimen in 1999 based on the Formation and Safety Training (FAST) warbird training program. Groups of Swifts can be spotted performing precision air work at airshows around the United States and overseas.

Documents posted in the Swift Museum explained that Globe Swift aircraft were manufactured prior to 1946 as the 85-hp GC–1A, although some had a slightly more powerful 90-hp version of the same engine. In the following years, Swift owners have converted their aircraft to a GC–1B derivative by installing a larger engine, although Classic Swifts typically have a 125- or 145-hp Continental powerplant.

Owners say the airplane lives up to its speedy namesake, with a 150-knot cruise speed on 10 gallons per hour typical of some of the larger engines frequently installed. “It’s truly a magic carpet,” said Jones.

Fly-in attendees voted for Swift grand champions in original, modified, and “super custom” categories. Type club members including Jerry Kirby, the owner of a modified Swift, noted that popular options included replacing the original and modest Continental powerplant with more powerful engines. The sky and an owner’s pocketbook are the limits as far as horsepower is concerned. Many of the speedsters have been upgraded to a Continental 210-hp version while other owners fancy Lycoming's 150- to 180-hp engines.

Aerodynamic cowl modifications, conversions of control yokes to sticks, and substituting a sliding or gull wing canopy for the original flip-down version are common mods.

The fly-in atmosphere was southern style and laid back. A sign advised pilots that it was “better to be a day late down here than a year early up there,” and another suggested that if they didn’t like the weather along their route, they should “stick around, unwind, and relax.”

Jones encouraged other type clubs to take a page from Swift’s book by offering owners’ forums, learning opportunities, and technical support. “I feel like all type clubs, and really anyone who has an airplane, should be a member [of their model’s type club] to learn more about their aircraft, safety of flight, but more importantly, to share in the fellowship and unity of aviation.” He said it was important for the entire aviation community to recruit potential pilots and to also support AOPA, the Experimental Aircraft Association, and others growing the pilot population.

“What a way to celebrate the 50th anniversary, it was truly very special,” said Jones. “To have Mark Baker address our crowd, you don’t know how monumental that was!” he exclaimed. 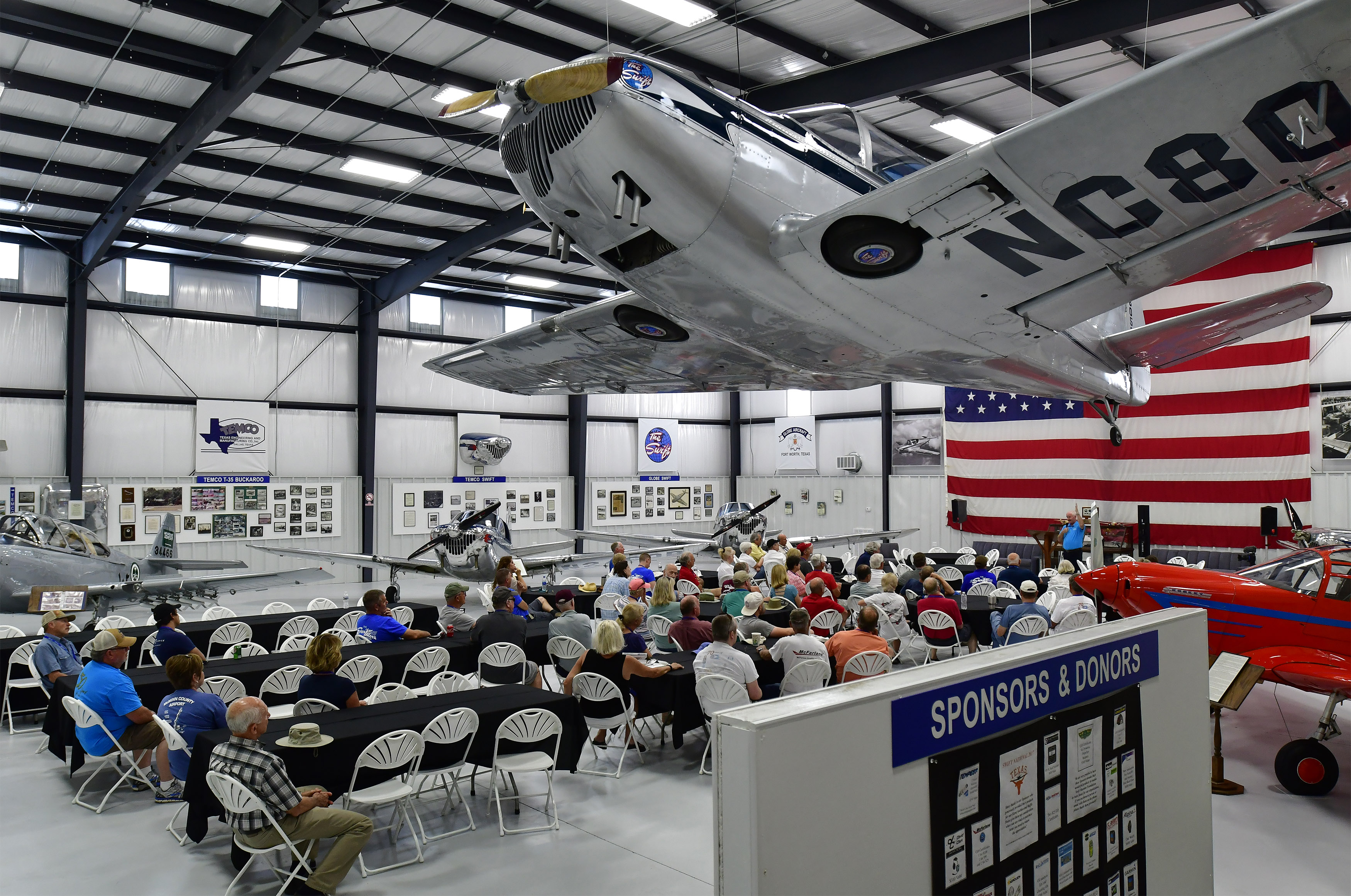