Get the app Get the app
Already a member? Please login below for an enhanced experience. Not a member? Join today
News & Media Stratolaunch rocket lifter rolls on

The giant airplane hangared in Mojave, California, and already commanding the attention of politicians and the public, recently conducted a new round of taxi tests—bringing Paul Allen's dream of routinely reaching space with airplanes a step closer. 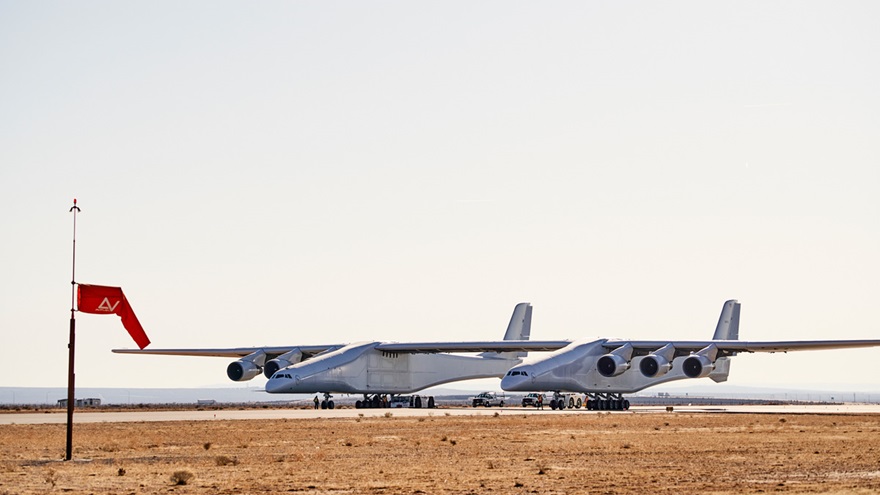 The massive Stratolaunch conducted a new round of taxi tests at Mojave Spaceport in Mojave, California, in late February. Photo courtesy of Stratolaunch Systems Corp.

Stratolaunch boasts the longest wingspan of any airplane ever made, and is a bit of an aeronautical mashup. The six engines, along with some landing gear and flight deck components, were lifted from a pair of Boeing 747s to make the project a bit more economical.

The mission of making spaceflight routine and more affordable is also about economy: Creating a flying launch platform for rockets and other spacecraft that brings them about 35,000 feet closer to low earth orbit dramatically reduces the cost and fuel requirements of a space launch.

Washington Post reporter Christian Davenport, the author of a forthcoming book about this and other efforts by various billionaires taking shots at space flight, reported on the recent Stratolaunch taxi tests March 6, spilling the beans on what else Microsoft co-founder and longtime aviation lover Allen has in mind for future Stratolaunch payloads. That list includes a fully reusable space shuttle called Black Ice, described to Davenport in exclusive interviews with Allen and Stratolaunch Systems Corp. CEO Jean Floyd.

“I would love to see us have a full reusable system and have weekly, if not more often, airport-style, repeatable operations going,” Allen said in that interview.

Allen collaborated with renowned aircraft designer Burt Rutan to capture the Ansari X prize in 2004, with Allen funding and Rutan designing what amounts to a smaller-scale version of Stratolaunch, a spacecraft carried to altitude by an airplane, which then drops free from the mother ship and ignites a rocket to finish the journey to space. Rutan’s prize-winning design was eventually sold to Richard Branson, and Virgin Galactic hopes to return to space soon, and eventually with paying customers aboard.

Allen, meanwhile, has espoused a go-slow approach to flying humans into space, preferring to focus in the shorter term on the lucrative commercial and military satellite launch business, and supplying the International Space Station. Black Ice would be roughly the size of NASA’s retired space shuttle, and able to haul cargo aloft from any airport able to support the massive Stratolaunch.