Get the app Get the app
Already a member? Please login below for an enhanced experience. Not a member? Join today
News & Media Advanced drone operations begin soon

Drones will deliver cargo including defibrillators and cheeseburgers over the next two years, as industry partners with 10 tribal, state, and local governments, to capture data and set the stage for making advanced unmanned aircraft operations—and airspace integration—a reality. 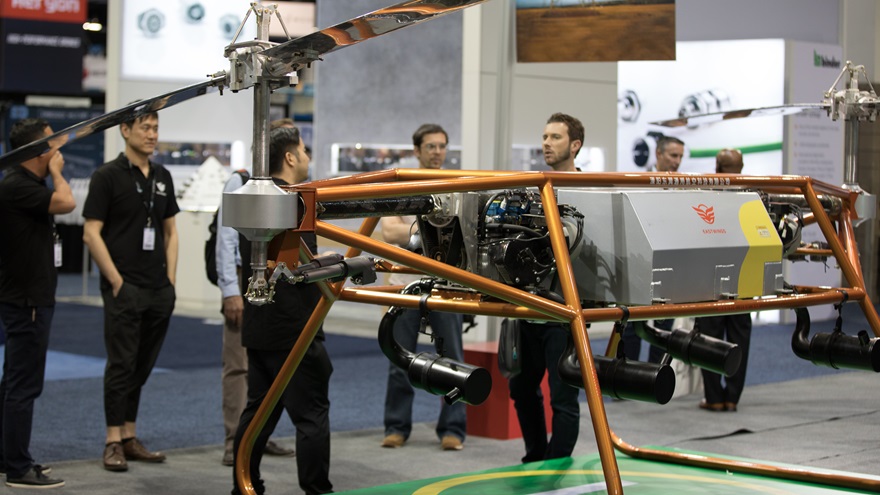 This unmanned, twin-rotor helicopter made by Liyang East Wing General Aviation Technology Co. can lift more than 1,000 pounds and is a type of drone that could be used for aerial application under the federal Unmanned Aircraft Systems Integration Pilot Program. Jim Moore photo.

U.S. Secretary of Transportation Elaine Chao announced on May 9 the selection of 10 proposals from 149 applications submitted jointly by industry and government entities seeking to conduct advanced operations under the Unmanned Aircraft Systems (UAS) Integration Pilot Program. Each of the approved projects will involve flying drones for missions not currently allowed under Part 107 without one or more waivers, and lay the foundation for approving routine drone operations that industry has long sought to realize the full potential of the fast-developing technology.

The FAA began accepting applications in November, and the selection of the first set of proposals marks a major step toward the safe integration of unmanned aircraft into the National Airspace System.

“The DOT and the Trump Administration properly recognized that it would be best to get real data on how state and local governments can help with UAS integration while preserving the federal government’s exclusive sovereignty over the national airspace,” said AOPA Director of Regulatory Affairs Justin Barkowski, among many AOPA staff members who have been directly involved in various aspects of drone integration in recent years.

AOPA is a member of the FAA Drone Advisory Committee and participated in that committee’s task group, which was assigned to study and recommend what role tribal, state, and local governments would play in the process of expanding the missions and uses of unmanned aircraft. In June 2017, AOPA joined 12 other DAC members (including manned aviation advocacy groups) calling on Congress to be patient and wait for multi-stakeholder recommendations before enacting new laws that could inhibit an orderly approach to safe integration.

The UAS Integration Pilot Program will provide real-world data and validation of new technologies to facilitate advanced operations including flights beyond the drone pilot’s line of sight. All 10 of the selected pilot programs involve flight beyond visual line of sight (BVLOS) for package delivery, aerial spraying, and infrastructure inspection. Some will involve flying unmanned aircraft significantly larger than the current limit of 55 pounds for package delivery and aerial application.

In North Carolina, PrecisionHawk will test its passive acoustic detection system working with the North Carolina Department of Transportation on localized package delivery.

The city of Reno, Nevada, will work with drone delivery startup Flirtey and a local ambulance provider to test drone delivery of defibrillators to heart attack patients.

The Lee County Mosquito Control District in Florida will use a large unmanned aircraft (able to lift 1,500 pounds) for aerial application of pest control products that have for decades been applied by manned aircraft.

In Tennessee, FedEx and Agricenter International will work with the Memphis-Shelby County Airport Authority to develop traffic management solutions and use drones to inspect FedEx aircraft, as well as other elements of the airport infrastructure, deliver aircraft parts, and fly beyond the perimeter fence to inspect farms.

The city of San Diego will partner with Uber and others to test food delivery. Uber CEO Dara Khosrowshahi noted, during his firm’s Elevate summit in Los Angeles, that this mission, too, will be important: “And, listen it is my personal belief that a key to solving urban mobility is flying burgers.”

All of the chosen IPP participants will collect data and help hone best practices, as well as guide the future regulation of advanced drone operations.

“AOPA believes this type of data gathering effort to be accomplished through the IPP is necessary before any major changes are made in the roles and responsibilities of governmental bodies regulating and overseeing UAS operations,” Barkowski said.

AOPA will continue to participate in the DAC, and work with industry and governments at all levels to carefully balance safety, sensible regulation, and the vast potential that drones represent to create jobs, improve quality of life, and, yes, even deliver dinner.