Taking a risk and failing is part of the learning process, SpaceX President and COO Gwynne Shotwell told more than 300 high school educators and industry leaders during a keynote address at the fourth annual AOPA High School Aviation STEM Symposium Nov. 5 and 6.

During her keynote address, Shotwell explained that the private space company weathered two back-to-back Falcon rocket launch failures that initially ignited criticism for private-sector space exploration but led to new technology. “Those weren’t failures, those were learning opportunities,” she said.

Shotwell, who became interested in engineering after attending an auto show as a teenager, told participants they could “learn more from failures than from your successes.” She said SpaceX solved problems and is on track to launch a crewed version of the spaceship “later this year. Once we’re sure we’ve done all the right things, we will put two dads on a flight to the International Space Station” by the end of 2019.

Kentucky high school teacher Luke Gilly could identify with turning what might look like a failure into a learning opportunity. He worried that a drone launch failure would derail the Middlesboro High School STEM aviation program in its infancy. He said most of the students and teachers in the small community that has an average annual household income of $22,000 turned out to watch the initial flight after students bought parts online and spent weeks assembling the kit. 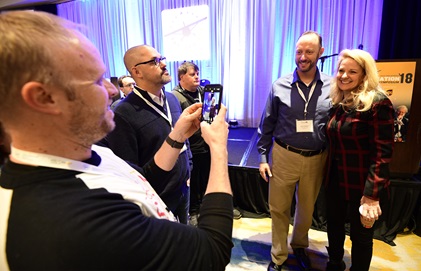 When it crashed and disintegrated, “I thought I was done for,” he recalled. “But they said, ‘Wow, cool! Let’s see if we can fix it.’” He said rebuilding the device taught students valuable electronics skills. He’s supervised additional drone mishaps and noted that when they crash he uses it as a learning tool instead of as a mark of failure because “drones are something they can do” without breaking the bank. Gilly said the AOPA High School Initiative was “way better than any textbook” he’s used. The hands-on lessons have sparked aviation interest in students who previously bemoaned his class. He said students that couldn’t wait to get out of school at the beginning of the term have asked him about taking flying lessons and airport job possibilities by the end of the year.

Inspiring the next generation

“We’ve got to find out what kids are interested in, what they are good at, and match things up,” said Chris Duzenbery, the director of college and career readiness for Decatur Township near Indianapolis.

AOPA President Mark Baker said the symposium was focused on energizing educators so they could help develop aviation interests in the next generation. He added that he was “excited about the next 20 to 25 years of aviation and aerospace careers” for young people. 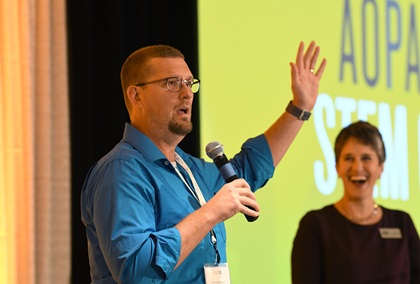 During welcoming remarks, Cindy Hasselbring, senior director of the AOPA High School Initiative, complimented field test teachers for their role as “the VIPs” for the next generation of aviators. “These teachers are the pioneers, and we are grateful for their efforts and support.”

Participant Stephen Kelley, a private pilot and a teacher at Massachusetts’ Southeastern Regional Vocational Technical High School, complimented the AOPA You Can Fly program for bringing together the educational experience. He said there wasn’t anything else to compare to this conference. He rubbed shoulders with fellow teachers, delivered a breakout session, and tried his hand at piloting a UPS Boeing 757 full-motion simulator at the shipping giant’s pilot training facility. Kelley was ecstatic after taking off from Boston’s Logan International Airport and performed an expert landing in the simulator.

Educators also got a look inside UPS Airlines' 24-hour maintenance facilities and at the UPS Worldport Hub that sorts 416,000 packages per hour with more than 300 daily flights, 125 ramp positions, and 155 miles of conveyors. “It’s pretty special for these educators,” said Hasselbring. “The UPS pilots participating in the tours are AOPA members and they are so excited for us to be there.”

FAA National Aviation and Space Education Program Manager James Brough facilitated a panel discussion about careers and said there are jobs on the horizon that have yet to be imagined. “Think about commercial space transportation” with non-NASA pilots “going into space and returning to land at a local facility.” He said there was likely “a well-paying career path through aviation” into “virtually anything that a child is interested in.” 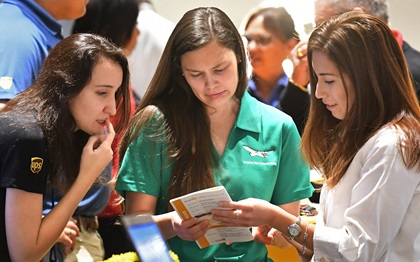 In response to an audience question, several panelists said that the aviation industry could be more inclusive among gender, race, and ethnicity.

U.S. Air Force Lt. Col. Kenyatta Ruffin said, “Pilots are 90 percent white and 90 percent male. From an African American perspective, we are at two percent.” He questioned if diversity is “ethnic, gender, and race based, or is it diversity of thought?”

Atlanta FAA air traffic controller Dawn Johnson said the number of women entering the ATC sector has remained largely stagnant since she entered the profession, but said she is hopeful that associations like Women in Aviation International could open the door.

Hasselbring said 25 percent of the students in the AOPA High School Aviation STEM curriculum “are girls, and that is priceless to us.”

During his keynote address, UPS Capt. and Global Public Policy Director Houston Mills pointed out that students who are interested in STEM learning would be well-suited for whatever the future of technology brings. “Aviation is the connective tissue of the world’s economy,” his said, complimenting AOPA for “leading the charge” to steer students toward professional aviation pathways.

Mills said he was excited to see educators helping shape the future. He alerted them to be vigilant for “aha moments” that can ignite a student’s curiosity and thirst for knowledge. “You never know when that moment is going to come,” he said.

The 2019 AOPA High School Aviation STEM Symposium will be Nov. 11 and 12 at the United Airlines flight training center in Denver.

The You Can Fly program and the Air Safety Institute are funded by charitable donations to the AOPA Foundation, a 501(c)(3) organization. To be a part of the solution, visit www.aopafoundation.org.