Get the app Get the app
AOPA will be closing at 2:30pm ET Wednesday, November 23rd, and will remain closed Thursday and Friday in observance of the Thanksgiving holiday. We will reopen Monday November 28th at 8:30am ET.
AOPA Members DO more LEARN more SAVE more - Get MORE out of being a pilot - CLICK HERE
News & Media Real-time wing flutter analysis a first

Airplane wings are more flexible than many might think, but important details of how a wing behaves in flight have long been a mystery, and safety has dictated a conservative approach to such unknowns. New research has reduced the guesswork. 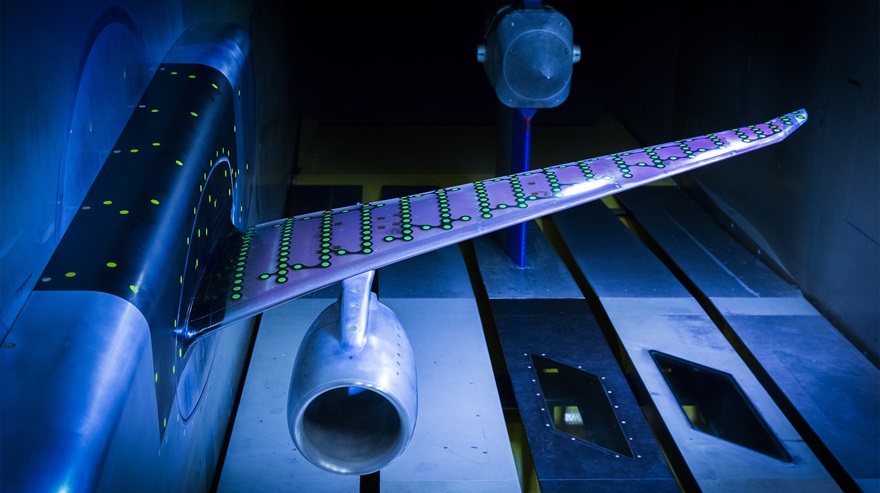 Recent tests of a wing and attached structures in Europe helped researchers and aircraft designers learn more precisely how a wing behaves. Photo courtesy of the German Aerospace Center (DLR).

An aircraft with a lighter, more flexible wing structure would fly more efficiently, but there’s a trade-off: Too much flexing spells failure that no one can live with. Understanding how wings behave under loads has for years been a goal of researchers seeking more fuel-efficient aircraft that are just as safe as the airplanes of today.

Flutter, the best understood of various phenomena resulting from the interaction of aerodynamic forces and elastic aircraft structures, is a vibration and flexing produced by specific combinations of forces and the elasticity of the structures upon which those forces act in flight. The design of the wing, as well as each structure attached to the wing (engine, in some cases, and fuselage in each case), play a role, along with the aircraft's mass, and the air itself. The wrong mix of forces leads to a vibration of increasing amplitude that can cause a wing to fail. While test pilots wear parachutes, finding the limits of flutter in a wind tunnel has obvious advantages.

NASA, Lockheed Martin Skunk Works, and the Air Force Research Laboratory worked on this problem in 2012 using unmanned aircraft; much more recently, it was Brazilian airplane maker Embraer teaming up with the German Aerospace Center (Deutsches Zentrum für Luft- und Raumfahrt, or DLR) and the Netherlands Aerospace Center to test a highly elastic, custom-made fiberglass wing in a wind tunnel in Amsterdam. Embraer initiated the project seeking to validate its computer model projections, enlisting help from the German and Dutch government aerospace agencies to design a wing tailored for the wind tunnel, and carry out the tests that aimed to probe the wing’s limits and analyze various loads without actually inducing a fatal flutter.

With instruments arrayed to measure stress and strain, the wind tunnel was cranked up to speeds ranging from Mach 0.7 to Mach 0.9 with the test wing positioned at various angles of attack.

The result was success, DLR reported in a recent news release: the first real-time analysis of wing behavior under stress, as the wing approaches flutter.

"This is a brand new method to analyse aircraft flutter," said Yves Govers of the DLR Institute of Aeroelasticity, in the news release. “It should also allow future aircraft to be tested more efficiently and more quickly.”