Norma Evans braved cool, breezy conditions in Lawrence, Kansas, on Oct. 11 to climb into the cockpit of a 1942 Boeing Stearman biplane. In so doing, she became the oldest person to take flight with the Ageless Aviation Dreams Foundation. 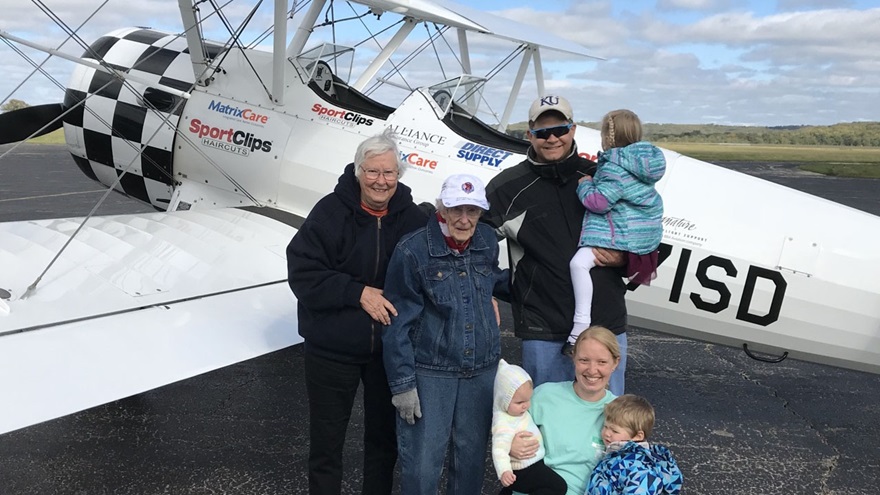 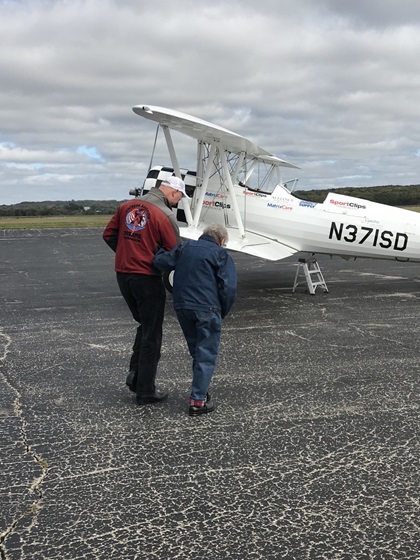 The nonprofit organization was created in 2011 and is dedicated to seniors and U.S. military veterans living in long-term care communities, who have always had a burning desire to fly. Darryl Fisher founded the Ageless Aviation Dreams Foundation and serves as its president (see “Skyward, Again” from the April 2016 AOPA Pilot).

Wearing blue jeans cuffed at the bottom to show a farmer’s plaid, a denim jacket, and warm gray gloves, Evans—at age 104—walked briskly to the plane on Fisher’s arm. With some help, she used a step ladder to climb onto the wing and into the cockpit, where the crew buckled her in and put on a canvas helmet before taking to the skies.

About 25 minutes later, she was back on the ground, all smiles.

“It was very windy and cold,” Evans said. “But it was awesome. I loved it.” And she knew that she would enjoy the experience—it was her second flight with Ageless Aviation Dreams.
“Norma’s an amazing, inspiring woman,” Fisher said. “We flew her last year at 103, and we are honored to fly her at 104.”

Fisher asked Evans if she will fly again next year. “If you’re able,” Evans quipped.

Amber Vaughn, the activities coordinator at Meadowlark Estates where Evans resides, said that last year Evans greeted the opportunity to fly with some hesitation. Not this year, however, Vaughn quickly added. “This year, she didn’t hesitate to say yes.”

Watching and cheering her on were her own children, grandchildren, and great-grandchildren. Her oldest daughter, Deloris Myers-Robb, said, “We don’t feel old because my mother is 104 and up there flying in a plane.”

Evans turned 104 on Aug. 1. She was interviewed by a reporter from a local TV station. Her secret to longevity, she said, was to stay busy. In addition to raising two daughters with her husband on an 80-acre farm, she played cards a lot, and danced. “My hands were always busy. I was always knitting, crocheting, sewing, doing something.” 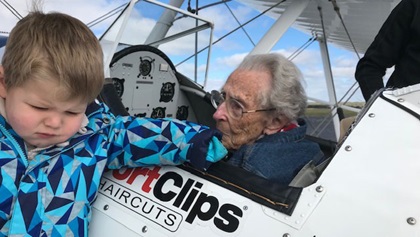 “Our mission to give back to those who have given,” Fisher said. “We appreciate and are thankful for the military veterans who serve our great nation.”

Since 2011, the Carson City, Nevada-based foundation has given more than 3,300 Dream Flights in 42 states. Volunteer pilots and crew members conduct the flights in one of three restored Boeing Stearman biplanes. One aircraft is based in Florida; one is stationed in San Antonio, Texas; and the third is hangared in Phoenix. The organization expects to receive a fourth aircraft, purchased using funds raised by volunteers, that will be based in the Midwest.

Technical Editor
Mike Collins, AOPA technical editor and director of business development, died at age 59 on February 25, 2021. He was an integral part of the AOPA Media team for nearly 30 years, and held many key editorial roles at AOPA Pilot, Flight Training, and AOPA Online. He was a gifted writer, editor, photographer, audio storyteller, and videographer, and was an instrument-rated pilot and drone pilot.
Go to Mike Collins's Profile
Topics: Aircraft, People