The barrier island was purchased in 1886 by industrial titans, but it’s now a state park deeded to the citizens of Georgia and legislated to remain affordable and family friendly. Jekyll Island has played a variety of roles through the years: Blackbeard the pirate hid nearby; seabirds seek sanctuary at its marshes and beaches; and fertile shrimping grounds help fuel the seafood industry.

If you’re flying into Jekyll Island Airport, steer clear of the restricted area at Naval Submarine Base Kings Bay about 15 miles south. The 3,715-foot runway is easy to spot from the air if you follow the massive Sidney Lanier Bridge from the mainland toward the Atlantic Ocean. Be advised that avgas isn’t available on the field, but McKinnon St. Simons Island Airport is across the bay three miles north of the landing pattern, with fuel and other services.

Here’s a tip for pilots: Leave your worries and hectic schedule behind. Instead, pack an island attitude, beach supplies, and a set of golf clubs or fishing poles. After landing, ask  about renting one of the Red Bug electric golf carts that seat up to six. That’s all you’ll need to explore the island’s pine- and oak-forested interior, its teeming marshland, or the eight miles of pristine shoreline that begin about a half-mile east of Runway 18/36.

Stepping onto Jekyll Island is like stepping back in time. The island’s limited development helps preserve wildlife and its natural beauty. About two-thirds of the island is protected from residential and commercial development, leaving about 10 miles of uncluttered beaches and no high-rises. However, there are a few modern conveniences. The center of the island was recently updated with a convention center, a few souvenir shops, an Irish sports bar, and a hotel. A fantastic local market stocks almost everything a beachgoer might need—from spicy jams to barbecue, and from milk to sandwich meats. Locally brewed Jekyll Island beer and southern wines command a large presence. 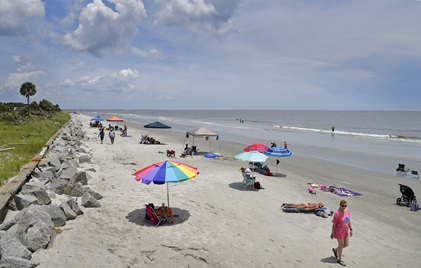 Overnighters can reserve bicycles at most of the hotels, and Jekyll Island Bike Rentals can fill in the gaps for day-trippers. Explorers can bike the flatlands through the remains of the island’s first brewery—built in 1747—view a setting sun through craggy trees at Driftwood Beach, or try to spot the baby alligator that lives in a picnic area pond adjacent to the Hampton Inn.

A pier on the north end of the island is a popular spot for line fishing and crabbing. A horseback outfitter near the pier provides beachside horseback adventures. An early morning ride through lush grasslands and palmettos, and around lakes to the sandy beach, made this flatlander feel like a cowboy—at least for a little while.

The Vanderbilts, Pulitzers, and Rockefellers enjoyed the balmy weather and frolicked at the historic Jekyll Island Club Resort, in operation since 1888. The island played host to history in 1910 when financial leaders gathered to establish what we now know as the Federal Reserve System. The first transcontinental telephone call was initiated in 1915 from the Jekyll Island Club to President Woodrow Wilson in Washington, D.C., with assistance from communications giant Alexander Graham Bell, stationed in New York.

The “Club” and its Grand Dining Room are still major draws for today’s movers and shakers who can unwind with an evening cocktail while viewing a golden sun setting behind Brunswick, a busy port city on the mainland.

Visitors with Gulfstream taste and an Ercoupe budget can cushion their finances with a stop at The Pantry for a casual breakfast or lunch. My favorites are the shrimp salad croissant—and any of the homemade pastries—washed down with a sweet iced tea.

Red Bug Motors Pizza and Pub is a mandatory stop for a reasonably priced, satisfying meal. Fairchild PT–19 and Cessna 172 owner Van Iderstyne said he established the restaurant about 10 years ago when he couldn’t get a pizza delivered to the island on Super Bowl Sunday. The small facility inside a former British pub next to the Great Dunes Golf Course offers massive pizzas, calzones, spaghetti, and salads. Adult beverages including modern brews from the Jekyll Brewery (actually made in an Atlanta suburb) are also available. The Red Bug Special pizza has enough meat and vegetables to feed a family of three—with a plate of leftovers for lunch.

Try grabbing a putter at the miniature golf course next door to work off some of your meal. Like much of the island, it’s decidedly old school. You won’t find flashing lights, alarms, or bells—just 18 mini-holes with ocean breezes, a lighthouse, a castle, a dinosaur, and enough ghoulish figurines to distract serious competitors. Golfers can also play 18- or nine-hole regulation courses at Jekyll Island Club, Indian Mound, Oleander, and Pine Lakes. 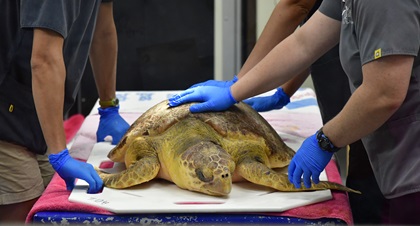 The Georgia Sea Turtle Center, a short Red Bug or bike ride from the airport, is a working turtle rescue facility and an educational gem. It’s located in the Jekyll Island Club’s historic district among 30 restored late 19th- and early 20th-century structures and is renowned for rehabilitating loggerhead, leatherback, Kemp’s Ridley, and green sea turtles. A large glass window allows visitors to watch and listen to the veterinarians at work while they talk about their research. Daily outdoor feedings provide great photo ops of nature’s slow-moving wonders regaining their strength before they are released into the wild. Pilot and TurtlesFlyToo.org founder Leslie Weinstein said aviators play a key role in transporting cold-stunned sea turtles to the respected Georgia rescue facility. He hopes to thank sea turtle volunteers with a fly-in or a barbecue on Jekyll sometime during 2019. 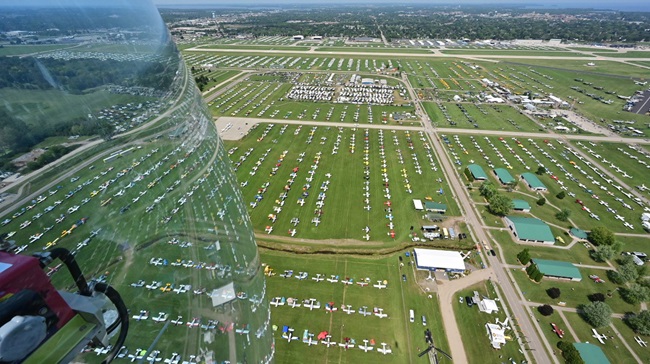