Get the app Get the app
Get the latest news on coronavirus impacts on general aviation, including what AOPA is doing to protect GA, event cancellations, advice for pilots to protect themselves, and more. Read More
Already a member? Please login below for an enhanced experience. Not a member? Join today
News & Media Restored Curtiss-Wright Hangar houses bustling brewery

Editor's note: Federal aviation regulations prohibit anyone from acting as a crewmember of a civil aircraft within eight hours after the consumption of any alcoholic beverage, while under the influence of alcohol, or while having an alcohol concentration of 0.04 or greater. Federal regulations do not preclude enjoying alcohol after the day’s flying is done.

The historic, restored Curtiss-Wright Hangar at Jim Hamilton-L.B. Owens Airport is drawing crowds and rave reviews adjacent to downtown Columbia, South Carolina. A recent visit to the structure built during the Golden Age of Aviation revealed dozens of pilots, families, and children enjoying the grounds and the atmosphere at the Hunter-Gatherer Brewery, the hangar’s tenant, in the shadows of Williams-Brice Stadium, home to the University of South Carolina Gamecocks football team.

The hulking structure experienced decades of neglect. The vacant building beckoned to Scott Linaberry, a private pilot and a Piper Archer III owner, whenever he taxied by the hangar with its hundreds of glass windows, architectural brickwork, and massive sliding doors. “I always loved that building,” he said. Vines crept up the massive front doors, and bricks bowed and crumbled before the residential and commercial developer and his partners stepped in to rescue the aviation treasure.

A detailed and historically accurate multiyear renovation brought it up to code for a 2018 reopening. Two earlier attempts at funding the restoration stalled, including an appeal to the Curtiss-Wright family that Linaberry said was “defeating.” However, the third time was a charm. “I was too ignorantly tenacious to quit,” he recalled during a tour of the facility as it filled up with patrons on a balmy spring afternoon.

Linaberry noted that by the end of 1929 when the first structure was erected, the Curtiss-Wright Flying Service was an aviation powerhouse with $10 million in assets and 350 airplanes in operation at 37 airports. Just before the stock market crash of the late 1920s, Columbia Mayor L.B. Owens, who Linaberry said was known as the “flying mayor,” convinced the county to purchase land for the hangar showcase. Georgia baseball great Ty Cobb led 5,000 aviation enthusiasts in an April 1930 christening ceremony that gave way to aircraft races that afternoon. The event was so popular that the crowd mushroomed to an estimated 15,000 to 20,000.

The airport flourished through the 1940s and 1950s, with Ford Trimotors delivering business people, residents, and college football fans ready to root for the USC football team just a few blocks west of the airport. Columbia’s main terminal building was located in the newly opened facility, and Delta Air Lines was the primary air carrier. In 1962, the city of Columbia transferred its ownership of Owens Field to Richland County, and the airfield’s wood-and-glass former centerpiece sat neglected for decades.

Linaberry organized a $1.5 million bridge loan, the city of Columbia kicked in $200,000, and Linaberry provided a lot of his own sweat, blood, and tears. To save money, he learned how to cut metal, pull electrical wiring, and paint. He taught himself how to operate a scissors lift, earth excavators, and other heavy machinery “just to keep the project on budget.” Linaberry filled six dumpsters with discarded asphalt, so he could plant grass to accommodate a vision of families and children frolicking at the airport.

Tips for flying in

Van’s Aircraft RV–7A pilot Tom Roberts parks his red-and-white aircraft in an adjacent hangar among a multitude of bicycles that he repairs for locals. He is happy the historic hangar was returned to its former glory.

Roberts noted that pilots who are flying into Jim Hamilton-L.B. Owens Airport should be aware of the right-traffic pattern for Runway 13. Runway 31 uses a standard left-traffic pattern. He reminded incoming pilots to fly at or above 1,500 feet when nearing the airport to avoid noise-sensitive areas north of the field. Roberts uses the National Collegiate Athletic Association’s massive stadium at USC for a visual reference when returning from the west, and he noted a railroad switching yard was just west of the runway. From the east side of Columbia, he crosses at midfield to “avoid the Class C squeeze from Columbia Metropolitan Airport,” six miles to the west. The Broad and Saluda rivers merge in Columbia to create the Congaree River, and the waterway is a good visual reference. “Just keep the river to your west to stay out of the Charlie airspace, and you’ll be OK,” said Roberts. Pilots have mistaken Columbia Municipal’s Runway 11/29 for Hamilton-Owens Field and ended up with a big surprise.

One of the biggest challenges was how to install 1,644 energy-efficient window panes while adhering to strict rules from South Carolina’s State Historic Preservation Office. “We wanted energy efficient windows, but I didn’t want the sun reflecting from them and blinding pilots, myself included,” he noted. Several window samples were tested, discarded, retested, and finally approved after months of research.

Throughout the project, historic preservation won out, though there were a few compromises to modernize the infrastructure. “I didn’t want to mess with the silhouette of the building for aesthetic reasons,” he explained. Landscaping, roof penetrations, and utility locations were chosen for minimal impact. “Nothing really interferes with what the building looked like, originally.”

As a pilot, Linaberry was sensitive to other issues that could affect flight safety including parking lot lights to ensure that they didn’t point toward the runway. He looked at the FAR/AIM and other sources for guidance. “You’d be surprised at how little information there is,” he added.

An outdoor patio and observation deck provided a good view of airplanes landing and taking off from the 5,011-foot-long Runway 13/31. Near the hangar’s massive sliding doors, a seating area with tables, booths, and a bar was a convenient place to watch aircraft in the pattern. Visitors ordered the Hunter-Gatherer Brewery’s fresh-baked margherita, pepperoni, or mushroom pizzas, for $10. A variety of salads were $7, and pilots who were not scheduled to fly quenched their thirst with one of the delicious beers brewed on-premises by Kevin Varner, who Linaberry met in college. When Linaberry made plans to restore the Curtiss-Wright Hangar to its former glory, Varner was the first person he thought of. “He was looking for a space, I was looking for a tenant, and it was a perfect fit.”

During the spring visit I sampled a delightful golden ale and an assertive India Pale Ale, which were both very popular with locals. Varner, who runs a brewery downtown, also brews an English-styled ESB, a dark brown porter, a black patent porter, and an extra-stout. “He’s a perfectionist,” said Linaberry. “If he brews a German pilsner, he only uses German hops. If he’s brewing an English Ale, he uses only English ingredients.” For pilots preparing for a flight, soft drinks are available; wine is on the menu for after-flying adventures.

Linaberry noted that the brewery was “slammed” the weekend that it opened in the historic hangar, with families and small children playing games of tag on the grass field surrounding it. “The Saturday after it opened almost brought tears to my eyes,” he said. “My whole intention was to provide a spark for aviation passion, and the community has come out in droves to support the project.” 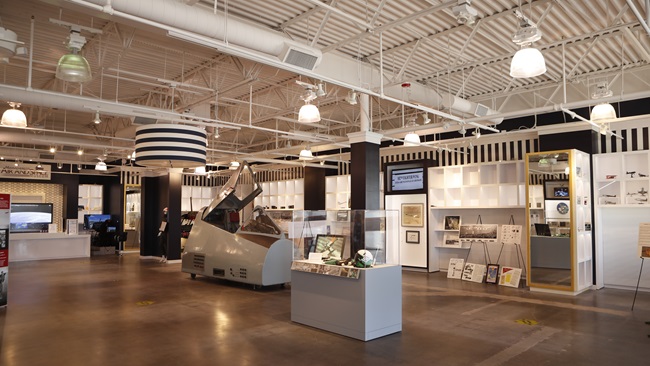