Get the app Get the app
Get the latest news on coronavirus impacts on general aviation, including what AOPA is doing to protect GA, event cancellations, advice for pilots to protect themselves, and more. Read More
Already a member? Please login below for an enhanced experience. Not a member? Join today
News & Media Florence leaves flooding, destruction

Rivers in North Carolina remained at record levels, many above flood stage, as the weather cleared and President Donald Trump arrived in New Bern to inspect part of the area hit hardest by Hurricane Florence. The storm deluged the Carolinas with record rainfalls that claimed at least 37 lives and left Wilmington cut off from the rest of the state by flooding. 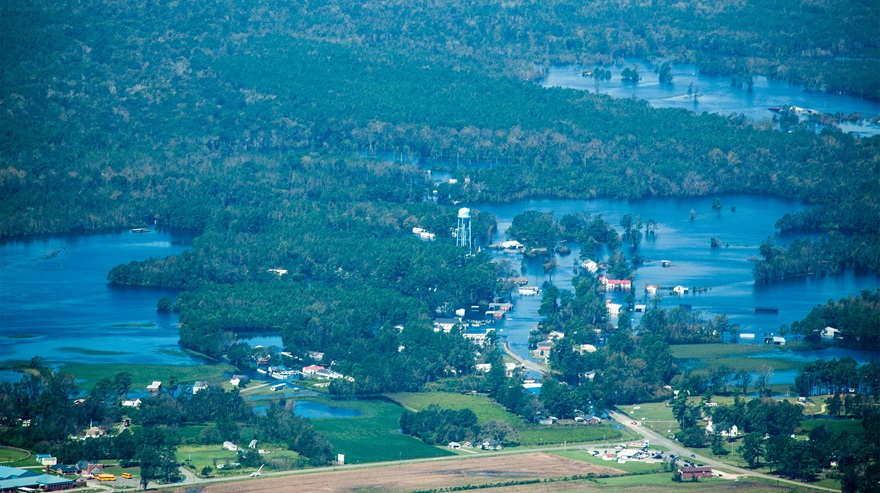 The rain moved out and the skies cleared, but water continued to rise across North Carolina. This photo taken Sept. 18 near Wilmington, North Carolina. Steve Rhode photo.

The National Weather Service predicted that "major to record river flooding" would continue in the Carolinas "for days to weeks to come" as rainfall from Florence coursed through the area's waterways.

The FAA issued a temporary flight restriction in the Wilmington area from the surface to 5,000 feet msl, to provide a safe operating environment for disaster response operations, and advised all pilots to check notices to airmen frequently for updates.

As Florence exited the Northeast, tornadoes and thunderstorms developed into Virginia and to New England. Although the weather had eased in the hardest-hit areas by Sept. 18, relief efforts making use of the helicopters, ambulances, and other resources that had been massed just out of the storm’s path had awaited improving weather and conditions on the ground.

On Sept. 19 Trump arrived aboard Air Force One at The Cherry Point Marine Corps Air Station for his tour of the area and meetings with state and local officials, pledging federal-government support and visiting a New Bern church where food was being distributed to victims. North Carolina Gov. Roy Cooper urged residents to remain alert for continued flooding and power outages.

At the Spartanburg Downtown Memorial Airport in South Carolina, where staging for hurricane relief began late last week, the population of the small city of responders who had arrived on the scene had reached about 500. One of the state’s two U.S. senators toured the facility, the airport director said. 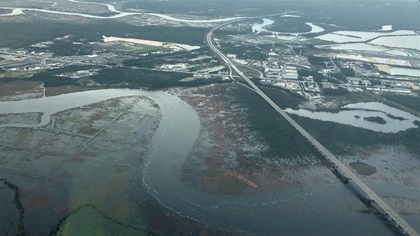 According to the National Weather Service, the highest confirmed rainfall amount in North Carolina from Florence was the 24 inches that fell in coastal Swansboro. That total and the 23.63 inches of rain that fell in Loris, South Carolina, “have likely broken their respective state's tropical cyclone rainfall records (subject to review),” it said in a tweet. The National Weather Service predicted that “significant river flooding” would continue across North Carolina.

Wilmington was reported cut off by flooded roads, and Wilmington International Airport’s passenger terminal was without power. But on Sept. 19 the airport reported that its three air carriers were operating, and "Air Wilmington, our FBO, has  line power and is operating."

The U.S. Coast Guard was operating rescue flights from the airport, which soon after the storm passed had opened one runway for VFR flights.

Private pilot Steve Rhode flew relief supplies from Raleigh to Wilmington tower controllers who were stranded at the airport because of the impassable roads, and  transported a controller back to Raleigh. With the Wilmington airport's radar facility and other area infrastructure out of service, obtaining clearances and weather information was difficult. “The airspace down there was crazy,” he told AOPA by phone.

Four tower controllers who did not evacuate ahead of the storm handled increasingly crowded airspace around Wilmington for days after the landfall, eventually relieved by fellow members of the National Air Traffic Controllers Association, said Tom Flanary, the union’s Miami Center  vice president. Flanary helped orchestrate the efforts of nearly two dozen NATCA members who volunteered to be flown into Wilmington to help, and not just in the tower. Most of this group headed to the flood-damaged homes of local controllers.

“We’re bringing controllers who are on their days off down to Wilmington, and they go to people’s houses and help them clean up, try and establish a normal life,” Flanary said by phone on Sept. 20.

Flanary said Rhode and a handful of other pilots drawn from a network of friends and colleagues handled the bulk of NATCA’s initial airlift, though others were expected to join that effort to increase the capacity of an air bridge created between Raleigh and Wilmington. Still more volunteers pitched in with purchasing needed supplies and delivering them to waiting aircraft, using a combination of their own money and donations to the union’s hurricane relief fund that supported a similar response to the hurricanes of 2017.

Resupplying tower staff, and their families, and helping them begin to recover (two local controllers had their homes completely flooded), required “a very complex logistical machine that we do very well with.” Flanary said many controllers are also pilots, himself included, and that controllers, specialists, and technical staff responded in numbers to their union’s plea for assistance.

Flanary said that when air transport needs arose that Rhode and his NATCA-focused compatriots could not meet, he could call on Operation Airdrop, a general aviation relief organization that began relief operations Sept. 18, and by Sept. 20 had amassed as many as 300 aircraft. That group noted on its Facebook page that volunteer pilots were eager to get started as soon as the worst weather had left the area. “Please do not take unnecessary risk, you all know how to read briefs and TAFs; do so and do so carefully. There will still be rain for one more day. You will not 'miss' anything from waiting one more day if you choose to do so. There is lots of work to be done here, and it won't all be accomplished on Monday in the rain,” it said.

In fact, it became increasingly clear as the days marched on and Wilmington remained largely cut off, a single road allowing access on the ground, that there would be work to be done for weeks to come, and beyond.

“We’re not at the worst point yet, that’s the problem,” Flanary said Sept. 20.  Some rivers were expected to rise three or four more feet, not cresting for days to come. Among the assets being flown in, dehumidifiers, and other equipment to help begin to repair flooded homes. 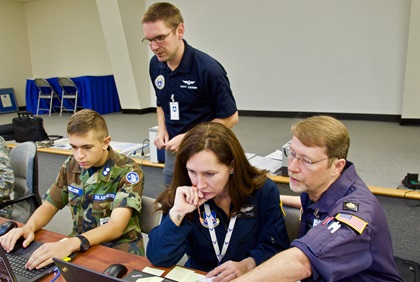 After a vital communications part failed in the Jacksonville, North Carolina, 911 system, the Civil Air Patrol’s North Carolina Wing staged a late-night flight Sept. 16 to deliver supplies that helped reactivate the emergency system. The North Carolina Wing dispatched 18 aircraft and nearly 2,000 volunteers for reconnaissance flights and other support missions as damage reports continued to roll in, according to public affairs manager Steve Cox.

Warning of possible flash flooding, the Charlotte Observer had reported 19 confirmed storm-related deaths on Sept. 17, and by Sept. 19 other reports placed the toll at 37. The newspaper reported the lifting of South Carolina beaches’ evacuation orders. The report warned of power outages and flooded roads in numerous parts of North Carolina, although at Kill Devil Hills and Kitty Hawk, visitors had been permitted back to the historic sites, and town offices were reopening.

Aerial photos of partly submerged homes and cars swept from roads highlighted news coverage of flooding in New Bern,where the Neuse River’s overflowing its bank was a foreshadowing of what lay ahead.

Flooding had surrounded a shut-down nuclear power plant in Brunswick, North Carolina, and news reports said some workers were stranded inside the facility. Duke Energy estimated 1.5 million of its customers lost power from the hurricane. By Sept. 20 it had restored power to all but 114,00 but faced obstacles such as flooded roads as repairs continued.

Tom Goodwin of Wallace, North Carolina, knows that his home airport, Henderson Field, has “a history of flooding,” so when the weather forecasts predicted that his area would be in Florence’s bull's-eye, on Sept. 12 he flew his 1974 Beechcraft Bonanza from the low-lying airport to Frankfort, Kentucky, in challenging weather. “My plane’s in a hangar, thank God,” he said, adding that he did not know when he would return to North Carolina, where his home and office were undamaged despite widespread destruction in the area.

Goodwin, a resident of the Wilmington area since 1986, said Florence brought “the worst flooding we’ve ever had. It came in and it just stopped, the exact scenario as what happened in Houston: A high to the east and a high to the west, and it just stopped,” he said, referring to Hurricane Harvey’s impact on the Texas city in 2017.

The FAA, which had shut down numerous radar and navigational aid systems “proactively” before the hurricane made landfall, on Sept. 17 announced the start of returning some to operation.

“Some systems remain out of service due to damage so pilots should anticipate possible communication and surveillance limitations in the area affected. Air traffic will be routing aircraft as efficiently as possible, but the area is best avoided while the focus remains on facilitating the emergency and search and rescue response. Pilots should check NOTAMs and call the airport/FBO ahead of time to determine the extent of services not available at the airport, such as power outages affecting fuel availability,” it said.

Rune Duke, AOPA senior director of airspace and air traffic, added that the FAA was cautioning pilots to check for notams about coordination of emergency operations or flight restrictions in the airspace. Also, the FAA urged recreational drone operators to limit their activities “due to the volume of low altitude rescue operations.” Drone flights should be conducted “in accordance with FAA requirements. Drone operators should always give way to manned aircraft operations.” 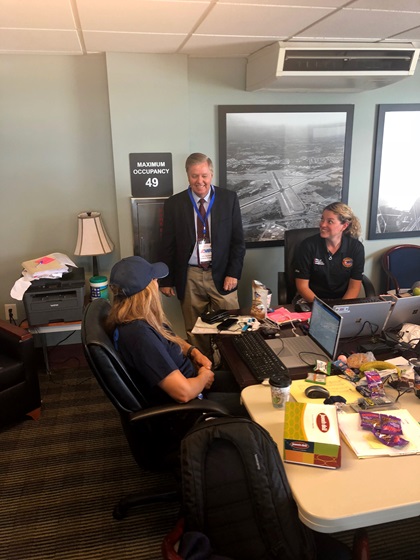 Terry Connorton, director of the Spartanburg, South Carolina, airport that had become a small city of Federal Emergency Management Agency-contracted emergency responders and pilots, said resources marshalled at the facility now included ambulance and helicopter maintenance teams, a communications command center, sleeping quarters “inside and outside the terminal,” and crews working to clean the grounds and control traffic.

“We have about 500 people here now, and it’s growing before they get deployed,” he said. Sen. Lindsey Graham (R-S.C.) toured the facility on Sept. 17, Connorton said.

The airport—which had conducted only helicopter operations for several weeks while its runway is being lengthened—was preparing to fuel several transient helicopters bound for destinations to the northeast of Spartanburg, “where the major issues are.”

During the hurricane, Spartanburg Downtown Memorial Airport experienced high winds of 37 knots and about three inches of rain, but never lost power, he said, adding that the airport’s 6,000-foot Runway 5/23 was expected to reopen on Oct. 2.