Get the app Get the app
Get the latest news on coronavirus impacts on general aviation, including what AOPA is doing to protect GA, event cancellations, advice for pilots to protect themselves, and more. Read More
Already a member? Please login below for an enhanced experience. Not a member? Join today
News & Videos Boeing Stearman: Childhood sweetheart

You should be able to get your neat toys when you’re younger, so you can enjoy them. That’s what Ken Haenlein believes.

The early July humidity hangs over Moore County Airport (SOP) in Southern Pines, North Carolina, like a wet washcloth. But you forget that it’s 95 degrees when you walk into the main hangar of Time Saver Aviation, Haenlein’s Part 135 charter business, and get your first look at N62201, also known as Sophie.

Standing tall amongst a King Air, a Piper Navajo, and the Bonanza, the Stearman’s brilliant red fabric and gleaming spinner command attention. You don’t often see Stearmans in this paint scheme—they’re usually sky blue or blue and yellow, frequently with a military insignia that reflects their purpose, which was to train pilots for World War II. N62201 has that in its lineage, too.

“There’s so much history attached to [the Stearman], the way it was used,” Haenlein said. Pilots learned to fly in a Stearman before they moved on to bigger aircraft, he said. “I associate with [those pilots] the meaning of the airplane.”

Haenlein’s grandfather flew a Beech Staggerwing. “I say I was an instrument pilot when I was 7 years old, because he would let me use the steering wheel but I couldn’t see over the panel,” he said. His grandfather was happy to nurture that love of aviation—but not enough to let him solo the Staggerwing or even manipulate it on the ground. On weekends and after school, 13-year-old Haenlein would bicycle to his uncle’s flight school at Bayport Aerodrome (23N) in Long Island, New York.

“He had three airplanes because one was always broken,” Haenlein recalled. “He had a blackboard in the hangar…and he would write on the blackboard” which airplane was needed for the day. Haenlein would pull the airplane out of the hangar, start it, and wait while the engine warmed up. “You had 4.4 gallons of oil that needed to be warmed up. I was taught always to watch the oil pressure. If it starts to go down and the engine’s running good, shut it down.”

Haenlein got his pilot certificate in a Stearman. He added instrument and rotary-wing ratings and worked part-time as a crop duster in a Bell 47, spraying potatoes, cauliflower, pumpkins, and corn in Long Island’s farm fields. Those growers have mostly disappeared, but there are some wineries remaining, he noted.

When he finished high school, Haenlein started freshman year at a college in Vermont. The Vietnam War began picking up steam, and with a low draft number he could not get a deferment, so he enlisted in the U.S. Coast Guard. He served two tours in Vietnam and earned a Purple Heart, and when he returned to the United States he remained in the Coast Guard as an admiral’s aide. That service ended in 1975 when he injured his leg and eventually had to have knee replacement surgery.

A history of service

N62201 trained young pilots to fly for the Army Air Forces through 1945. In 1946, the airplane was sold to an attorney in Texas, and then to another attorney in Louisiana. In the 1970s and 1980s it was a crop duster and had a few “dings and accidents,” according to Haenlein, who has all the logbooks for the airplane. After an incident in which the airplane clipped some trees, someone repaired a leading edge with duct tape to keep it flying, he said.

Eventually, N62201 was grounded and cannibalized for parts. The father and son who rescued it in 1997 trailered the remainder of the airplane—now missing its tail and its engine cowling—to Andrews, North Carolina, to begin a top-down restoration with Jerry Stadtmiller and BIPE Inc., a well-known antique airplane restoration facility.

“The decision was made to make it a show aircraft,” Haenlein said.

The Stearman was stripped to the bare frame and the cloth replaced on the empennage. Big Sky Stearman in Sandy, Oregon, crafted new wooden wings. An electrical system was added, and the original brakes were swapped out for Red Line Brakes from Air Repair in Cleveland, Mississippi. “The [old] brakes were kind of funky—they have a habit of locking up, and if you lock up you go tail over,” Haenlein said. “The Red Line Brakes heat up but don’t heat up the stick,” he said.

A Lycoming 300-horsepower R-680E3B now rests in the engine compartment, which is open because the cowling could not be salvaged. The Lycoming turns a Hamilton variable-pitch propeller.

Back in the left seat

The knee replacement surgery caused Haenlein to lose his medical certificate, and he didn’t fly from 1975 through 1983. He earned an accounting degree and began working in the health care industry. In 1983, he regained his medical and earned a commercial certificate and a multiengine rating, hoping to transition to the airlines. Then he realized he couldn’t afford the pay cut to work for a regional airline.

Offered early retirement in 1995, Haenlein decided it was time to return to aviation. He became a flight instructor and taught for a few years. He flew for NetJets, but he found that the schedule kept him away from home too much.

Haenlein launched Time Saver Aviation in 2003. The company operates a Bonanza, a Piper Navajo, and a King Air B100. He also owns a maintenance and avionics shop based at Raleigh Executive Jetport (TTA).

Still jonesing for a Stearman, Haenlein began looking in earnest, scrolling Barnstormers, Trade-a-Plane, and Controller.com. “I found this particular market is a specialty market and there are not that many places that sell these types of airplanes,” he said. He looked at four flying Stearmans, a bunch of projects, and even a Waco YMF–5.

“It had a lot more up to date avionics, [including] a flat panel screen,” he said. “But it wasn’t a Stearman.”

Coincidentally, N62201 and Ken Haenlein had crossed paths in 2008. He had flown a charter to Andrews-Murphy Airport (RHP) in western North Carolina. Admiring the work, he was told the owner might be willing to sell. They got in touch, but the owner’s price was too high at the time.

In 2014 the owner of N62201 had a drastic change in his financial situation and needed to sell the Stearman, quickly. He contacted Haenlein again and accepted an offer of $115,000.

“My wife [Ellen] got this plane for me as a Christmas present,” Haenlein said. “We got the plane a week before Christmas. It was a beautiful day, 48 degrees, and it was the stupidest flight I’ve ever done. We flew from here to Sanford (North Carolina) to pick it up—and I had to borrow a toboggan because my head was freezing. I couldn’t hear anything.”

The previous owner had dubbed the Stearman Sophie after his mother, and Haenlein kept that name because “She looks like a Sophie,” he said. “She doesn’t look like a Peg.”

Since acquiring N62201, Haenlein has added a few extras, all while striving to keep the airplane as close to original as possible.

The Stearman came with boat cushions in the front and aft seating area. He discovered that the airplane didn’t have true Stearman seats, but instead the type of seats that were installed in Vought F4U Corsairs. In those warplanes, the pilot was meant to sit on his parachute.

Warned that he would have difficulty finding ready-made seat cushions, Haenlein turned to Carolina Avionics & Aircraft Interiors in Salisbury, North Carolina, for help. The shop created custom red leather seat cushions, each embroidered with the Stearman logo. Each set of cushions is two pieces that Velcro together.

“It’s probably one of the most unusual projects we’ve done,” said Warren Ludlum, vice president of sales and marketing for Carolina Avionics & Aircraft Interiors. The shop had experience replicating a vintage look—it refurbished the seats and completed some foam cushion work for the Boeing B-17 Memphis Belle, which was used as a platform for the 1990 film of the same name.

The noise of the open cockpit prompted a change in the intercom system, and Haenlein also added a Garmin GNS 430W and a Garmin GTX 330 transponder.

Otherwise, Haenlein has tried to keep the Stearman as close to its 1940s configuration as possible. The microphone push-to-talk switch is set up at the throttle rather than the stick, because the original Stearmans had nothing on the stick, he said. “The stick in the Stearman is the same stick that’s in a P–51,” he said.

By 7 p.m., heat waves are still rising from the taxiway at Moore County Airport, and cumulus clouds are roiling on the horizon. You climb into the fore cockpit, wincing as you step on those pristine red leather cushions. You strap on a leather helmet with goggles, because this is a Stearman, and what else would you wear?

Pilot Bob Wall, who flies for Time Saver Aviation, starts the Lycoming, and it rumbles into life as authoritatively as the original Jacobs engine must have done in 1941. That throaty engine burns around 13 gallons per hour, and oil consumption is about one quart for every two hours of flying. “If it sits for longer than a couple of weeks without flying, the first start it will spit out some oil and increase your consumption by a half to one quart,” Haenlein said.

Even with the upgraded intercom, the radio is loud and distorted, and a little disconcerting. This is not an airplane in which you were meant to do a lot of chatting. Instead, you might signal to the backseat pilot using the small mirror attached to one of the struts. Or he might tug on your jacket.

As Wall advances the throttle and the tail comes up, you forget the radio and everything else, and simply absorb the air coming fast at you and the sight of the airplane levitating easily in 500 feet. At 2,000 feet agl, the air cools. The cars on the four-lane highway below outpace you, but you don’t care, because you’re in a Stearman. They’re going faster, but you’re going better.

The Stearman is a lot of airplane, and flying it requires attention and persistence. “Taking off is never really a problem,” said Haenlein. “Put the power to it, she rolls 500 feet and you’re airborne. It’s designed to fly; it’s not designed to land.”

Cruising speed is about 85 to 90 miled per hour. The 300-horsepower engine makes the airplane a bit nose-heavy, Haenlein said. You’d better be on your airspeed—60 knots—on short final, and don’t pull the power until you’re ready to settle. “It drops like a rock, it doesn’t have a float,” Haenlein said.

Flying Sophie takes him right back to the days when he was piloting his uncle’s Stearmans on Long Island. He shares that emotion whenever possible, allotting two hours wherever he stops so that people can ask questions about the airplane, and taking veterans for rides.

When he climbs into the Stearman on a calm morning, everything else pales in comparison. “When I get time and get into the Stearman, nobody can get hold of me,” he said. “It puts a smile on my face.” 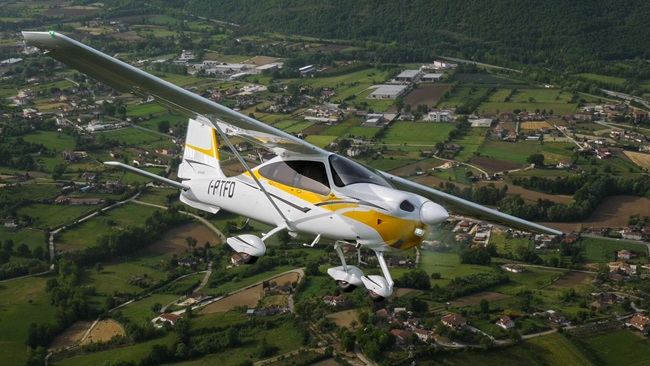