The FAA published a “Statement of Policy for Authorizations to Operators of Aircraft that are Not Equipped With Automatic Dependent Surveillance-Broadcast (ADS-B) Out Equipment” April 1 in the Federal Register. While the policy document’s name is a mouthful, and despite the date of publication, it is no laughing matter—or April Fool’s joke. This document establishes the FAA’s policy for issuing air traffic control authorizations to pilots flying aircraft not equipped with ADS-B Out equipment who want to access ADS-B rule airspace after Jan. 1, 2020. 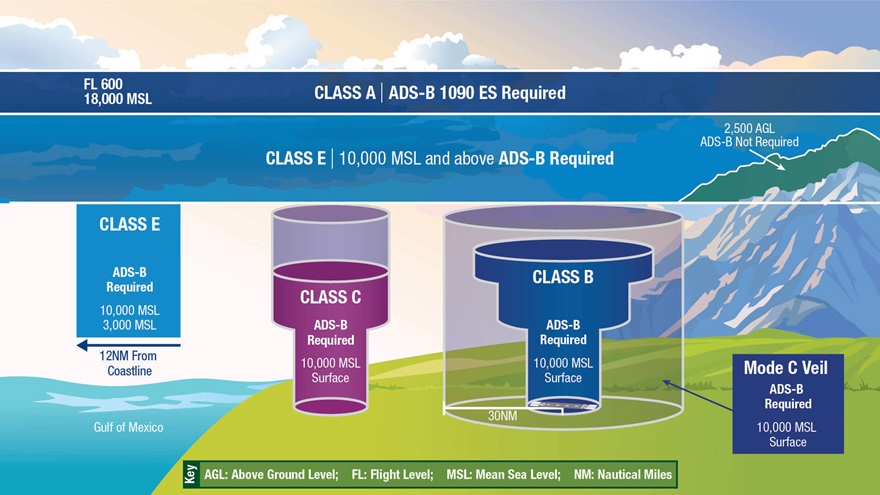 This graphic depicts the airspace defined by 14 CFR 91.225, where ADS-B Out will be required—in addition to an altitude-encoding transponder—for flights after Jan. 1, 2020. Graphic courtesy of the FAA.

ADS-B uses satellites instead of ground-based radar to determine aircraft location, and is a key technology behind the FAA’s Next Generation Air Traffic Control System. The FAA has mandated ADS-B Out for flights after Jan. 1, 2020, generally in airspace where a transponder is required today.

The FAA said that it is placing the burden for approving non-equipped aircraft operations in ADS-B rule airspace, defined by 14 CFR 91.225, primarily on the aircraft operator—and not on the FAA. “To the maximum extent possible, operators of equipped aircraft should not be penalized or have their ATC services affected by operators who choose not to equip their aircraft with ADS-B Out equipment,” the agency wrote in the policy statement. “Therefore, an ATC authorization allowing an operator to deviate from the equipage requirements of [14 CFR] 91.225 must be requested and obtained prior to the operation.”

Only if ADS-B Out equipment fails in flight will controllers be able to issue an airspace authorization to an airborne aircraft, said Rune Duke, AOPA senior director of airspace and air traffic. Other operators must request an authorization at least one hour in advance, through a website that is being developed. “We can expect the website for non-equipped authorizations to be available before 2020, likely by December,” said Duke, who regularly participates in FAA meetings.

Duke said he expects the FAA to implement a system to track approved authorizations for non-equipped aircraft, and that the agency will monitor rule airspace and take postflight action against unauthorized aircraft. “The FAA will employ its compliance philosophy here,” he said. “Authorizations may be granted for those owners who need to get into or out of rule airspace to equip. The leniency will only last so long.” Unequipped aircraft that request a lot of airspace authorizations will probably find themselves cut off, he added. “Airspace authorizations are not a substitution for equipping in compliance with the rule.”

“ATC will make determinations as necessary to ensure equipped operators are not adversely impacted and that efficiency of operations is maintained,” the document continued. “Consistent with this principle, it will be difficult for unscheduled operators conducting operations at capacity-constrained airports to obtain authorizations. Given the complex and dynamic nature of operations within this airspace, it is unlikely that ATC will prioritize authorization requests for unequipped aircraft over providing air traffic services to aircraft equipped with ADS-B Out equipment. Unscheduled operators with a need to access this airspace on more than an occasional basis should equip with ADS-B Out to ensure no disruption to operations.

An “unscheduled operator” is defined as any flight that does not meet 14 CFR 110.2’s definition of scheduled operations, including Part 135 commercial operations as well as GA flights conducted under Part 91.

The FAA’s Air Traffic Organization is responsible for issuing preflight authorizations to unequipped aircraft under 14 CFR 91.225(g), while its Aviation Safety organization will be responsible for post-flight oversight of the operations. Both the issuance and denial of airspace authorization requests will be tracked by the system. Any pilot who operates a non-equipped aircraft in ADS-B airspace without obtaining a preflight authorization in accordance with 14 CFR 91.225(g)(2) will be deemed to have violated the regulations.

AOPA is working closely with the FAA on the final policies that will govern non-equipped aircraft flying in close proximity to rule airspace. “We are making progress on ironing out the policy that will govern pilots and air traffic controllers should vectoring and other air traffic clearances require a pilot to fly into rule airspace without prior authorization,” Duke said. “It could be a safety issue, so we are working to ensure pilots and controllers do not unduly have their hands tied.”

Technical Editor
Mike Collins, AOPA technical editor and director of business development, died at age 59 on February 25, 2021. He was an integral part of the AOPA Media team for nearly 30 years, and held many key editorial roles at AOPA Pilot, Flight Training, and AOPA Online. He was a gifted writer, editor, photographer, audio storyteller, and videographer, and was an instrument-rated pilot and drone pilot.
Go to Mike Collins's Profile
Topics: Advocacy, Aircraft Regulation, ADS-B