Get the app Get the app
Get the latest news on coronavirus impacts on general aviation, including what AOPA is doing to protect GA, event cancellations, advice for pilots to protect themselves, and more. Read More
Already a member? Please login below for an enhanced experience. Not a member? Join today
News & Videos D-Day Squadron, Liberty Jump Team to perform at AOPA Fly-In

Editor's note: This article was updated on May 2, 2019, to include the addition of another warbird that will join the D-Day Squadron during the AOPA Fly-In at Frederick, Maryland. "Clipper Tabitha May" is now part of the lineup.

Don’t miss this tribute to the upcoming seventy-fifth anniversary of D-Day—period paratroopers will jump from Douglas C–47 Skytrains and DC–3s during a flyover at the AOPA Frederick, Maryland, Fly-In. 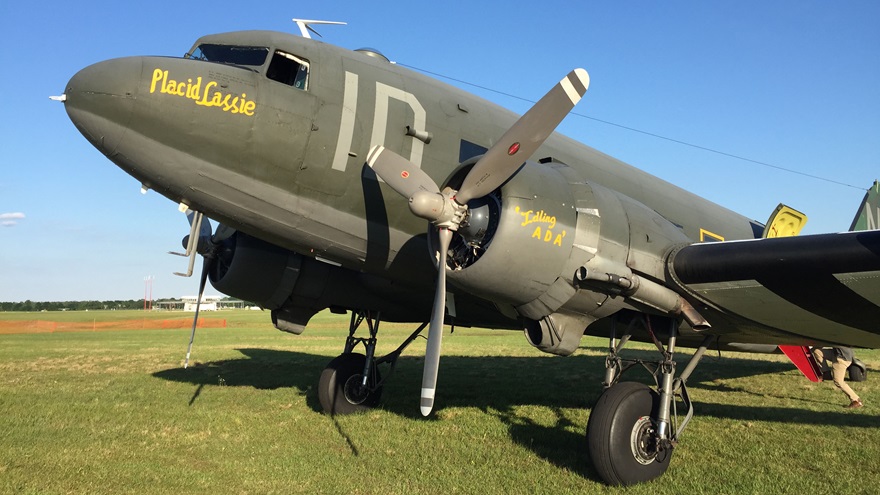 "Placid Lassie" is a 75-year-old, still-flying C–47 Skytrain that will join up with other DC–3s for the seventy-fifth anniversary of D-Day in Normandy, France.
Six of the C–47s and DC–3s involved in the D-Day Squadron’s flight to Normandy, France, to honor the seventy-fifth anniversary of D-Day will be flying in on May 10 and 11, and members of the Liberty Jump Team will parachute from overhead, taking you back in time to June 6, 1944. The warbirds—Placid Lassie, Miss Virginia, Flabob Express, Betsy’s Biscuit Bomber, Virginia Ann, and Clipper Tabitha May—will be on static display through May 11  so that you can get an up-close look. (The C–47s and DC–3s will be gone briefly midday on May 10 for a special flight over Arlington National Cemetery to honor fallen World War II heroes.)

"AOPA and the D-Day Squadron are working together to educate the public about the amazing seventy-fifth anniversary of D-Day and the reason it’s worth celebrating,” Tom Haines, AOPA senior vice president of media, communications, and outreach, said in announcing the partnership. “AOPA was formed 80 years ago to protect against undue restrictions on private flying as the war began in Europe and to give general aviation pilots a unified voice. Five years later the D-Day invasion commenced in an effort to assure those sorts of freedom to people across Europe.”

To get a behind-the-scenes look at the preparations for jumping from these warbirds, follow the World War II Airborne Demonstration Team in “Reliving history,” in the February 2019 issue of AOPA Pilot.

To celebrate both events, some of the D-Day Squadron aircraft and Liberty Jump Team members will perform at AOPA’s anniversary fly-in, which is on the way north for these aircraft as they prepare to fly across the Atlantic Ocean. The squadron will participate with Daks Over Normandy to fly across the English Channel on June 6.

For the best view of the flyover and parachute demonstration, take part in the Flightline Cookout on May 10. One of the features will be these two groups performing, in addition to a Short Takeoff and Landing (STOL) Invitational and drone show. Adult tickets cost $20 in advance and $25 at the door, and tickets for children 12 and under cost $10 in advance and $12 at the event.

If you can’t make it on Friday, don’t worry, you won’t miss out. The D-Day Squadron and STOL Invitational will perform again around noon on May 11.