Get the app Get the app
AOPA Members DO more LEARN more SAVE more - Get MORE out of being a pilot - CLICK HERE
News & Media ADS-B: Going global

As of April 1, nine months remain to equip for aircraft owners who must comply with the FAA’s Automatic Dependent Surveillance-Broadcast Out mandate. The FAA will require ADS-B Out for most flights after January 1, 2020, in airspace where a transponder is required today. 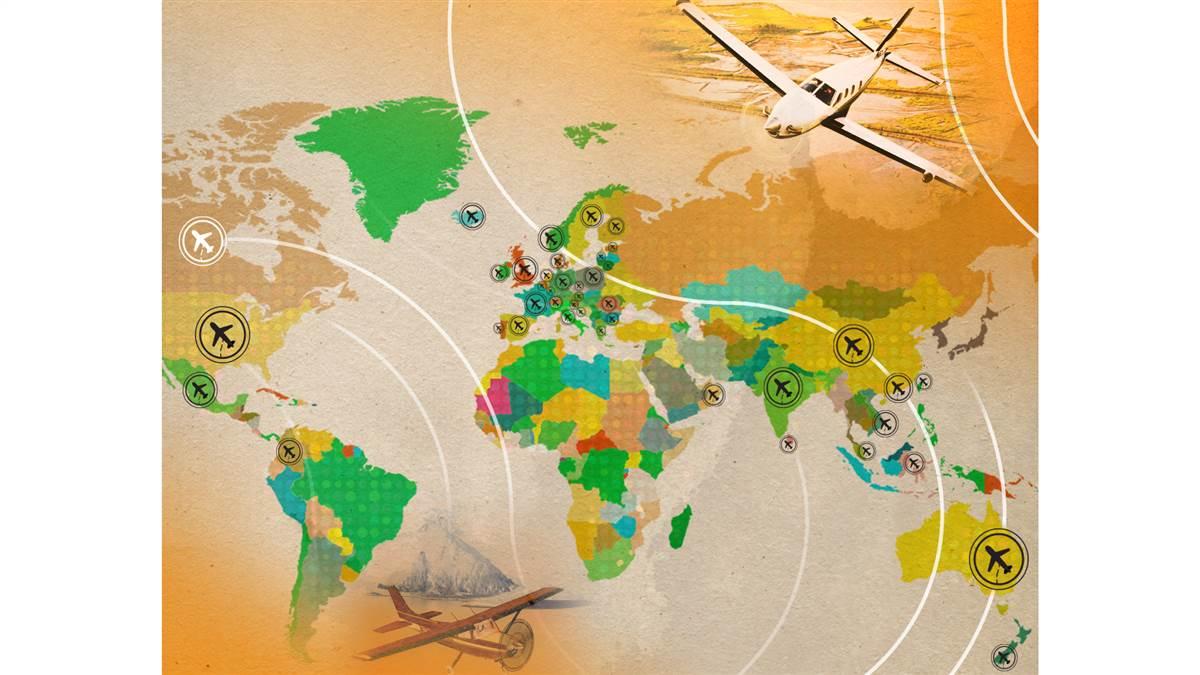 And the technology is not coming only to the United States. In many countries around the world, mandates have been announced or are working their way through the regulatory process. ADS-B mandates have nearly doubled since we last looked at the topic (“ADS-B: International and Diversity,” January 2016 AOPA Pilot). And an innovation way over our heads—literally—might cause complications for aircraft that have to fly in some of this emerging ADS-B airspace.

On February 7, Aireon formally received control of the final six payloads from Iridium. Aireon’s system was scheduled to go live in the first quarter of 2019, beginning with operational trials over the North Atlantic.

Those satellites are a potential rub. Nav Canada’s proposed mandate requires antenna diversity—ADS-B antennas on both the bottom and top of the aircraft—to support 5-nautical-mile aircraft separation using space-based ADS-B. Nav Canada will require 1090 MHz extended squitter (1090ES) ADS-B (the international standard; only the United States allows 978MHz universal access transceivers, and then only below Flight Level 180) compliant with RTCA DO-260B after January 1, 2024, although DO-260 or DO-260A can be used until then.

A significant challenge for lighter GA aircraft is that only three ADS-B transponders currently support antenna diversity—the Garmin GTX 33D ES and GTX 330D ES, and the L3 Commercial Aviation Lynx NGT-9000. (Non-diversity GTX 33ES and GTX330 ES models can be modified at the factory to include antenna diversity; a software unlock adds the capability to non-diversity NGT-9000s.)

Nav Canada said the ADS-B Out performance requirements were determined after assessing issues and concerns raised by stakeholders, and that the proposed mandate would harmonize with U.S. and European ADS-B Out mandates. However, only the relatively small fleet of aircraft equipped with traffic alert and collision avoidance systems (TCAS II) have antenna diversity; neither the United States nor Europe has mandated the diversity capability as part of ADS-B.

Rune Duke, AOPA senior director of airspace and air traffic, was quick to point out that Transport Canada has not yet approved Nav Canada’s request. “AOPA is continuing to work with COPA, the Canadian Owners and Pilots Association, to advocate for only justifiable airspace and equipage mandates. The diversity requirement would be significant if it was approved by Transport Canada. And as Nav Canada expands its mandate to lower airspace, around 2023, we can expect a diversity requirement to affect more U.S. and Canadian GA.”

Few small GA aircraft are equipped with TCAS II, Duke said. No current Canadian or U.S. regulation requires private operators to equip with it, although International Civil Aviation Organization rules require that all turbine-powered airplanes with a maximum certificated takeoff weight of more than 33,000 pounds (15,000 kg) or authorized to carry more than 30 passengers, with an individual airworthiness certificate first issued after Jan. 1, 2007, be equipped with an airborne collision avoidance system.

“Nav Canada is still analyzing whether a low-altitude diversity requirement is warranted, and Transport Canada has yet to approve the initial phases of the rule that would govern the higher altitudes,” Duke said. “We are staying closely involved in this effort.”

COPA expects further validation of bottom-only signal reception, said Bernard Gervais, COPA president and CEO. “There haven’t been enough tests to determine if the bottom-mounted antenna is enough for the required accuracy.

“We are a little concerned because at this point, there’s no ground-based ADS-B [planned for Canada]. My transponder antenna points at the ground. I’m thinking the industry should be looking at something different,” he said. “If I got a top-mounted antenna on my aircraft, would I still be picked up by antennas on the ground?” Gervais thinks that for VFR aircraft not requiring IFR separation, a belly-mounted antenna could be enough. “There is still a lot to determine.”

When Nav Canada expands ADS-B into Phase 3, which could include terminal airspace, he expects the agency to conduct a formal aeronautical study—normal any time a service is changed—and that COPA would be part of its stakeholder group.

In late 2017, with only the first 15 ADS-B payloads in orbit, Aireon was busy evaluating preliminary satellite ADS-B data (see “ADS-B: Taking the High View,” January 2018 AOPA Pilot). The company saw a lot more aircraft than it expected. While noting that the system was designed to receive signals from top-mounted transponder antennas, Aireon said that it can receive bottom-antenna-only 1090ES signals, depending on the angles and position of the satellite.

For now, aircraft owners based in Canada—or American owners who have not equipped, and who want to ensure compliance with Canadian requirements—might want to hold off until the requirements are finalized. Unfortunately, the rapid approach of the FAA mandate might make this difficult. And owners interested in the FAA’s $500 ADS-B rebate (www.faa.gov/go/rebate) should not wait; in mid-February only 4,400 reservations remained. AOPA is not aware of any other national air service providers in the Aireon partnership that have announced ADS-B mandates requiring antenna diversity.

The rest of the world

The European Union will require 1090ES ADS-B Out by June 7, 2020, for IFR aircraft with a maximum takeoff weight heavier than 12,566 pounds (5,700 kg) or a maximum cruise airspeed faster than 250 KTAS. ADS-B coverage will be spotty in areas, and not fully integrated with air traffic management, in June 2020, but coverage will be nearly complete—and completely integrated—by December 2023. However, there currently is no clear and harmonized pan-European direction for GA surveillance equipage, which risks continued and even increasing GA equipment diversification across the European countries.