Get the app Get the app
Already a member? Please login below for an enhanced experience. Not a member? Join today
News & Media Air ambulance operator seeks damages for fuel contamination

Fuel contaminated with diesel exhaust fluid forced two air ambulances to make emergency landings in May. Both aircraft have been declared total losses, and the operator is lining up legal action. 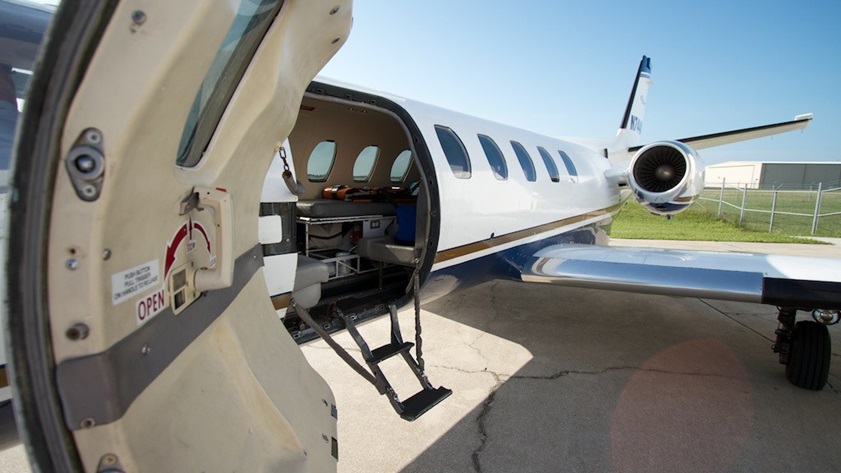 On May 9, both twinjets departed Air Trek’s Punta Gorda base and flew to Naples, Florida, where medical technicians, patients, and patients’ family members boarded. AOPA reported that one Citation was headed to Niagara Falls, New York, but experienced an engine flameout north of Savannah, Georgia. It then lost its second engine but landed safely in Savannah. The other Citation was bound for Chicago when it experienced an engine failure, and landed safely in Louisville, Kentucky. In all, 13 occupants escaped without injury, said Dana Carr, Air Trek’s director of operations.

The FAA determined that the two aircraft received fuel that had been contaminated with diesel exhaust fluid, or DEF, which had been added erroneously to the fuel supply in a fuel truck in Punta Gorda. DEF is a urea-based chemical that reduces diesel-engine emissions. It is not intended for use in aircraft, and when added to jet fuel, can trigger chemical reactions leading to the formation of crystals that can plug fuel filters and damage other engine components.

The incidents followed occurrences at other airports in 2018 and 2017 that had triggered FAA warnings and prompted intensive industry review of aircraft-fueling practices and personnel training.

In an Aug. 7 phone interview, Carr expressed Air Trek’s pride in the performance of the two fight crews. “They did an admirable job,” he said, noting that one of the pilots was, fortuitously, also rated in gliders.

DEF a bad fit for airports

The risk of jet fuel being contaminated by diesel exhaust fluid (DEF) is “unacceptably high,” and the Environmental Protection Agency should exempt airport vehicles from emissions requirements mandating the use of DEF “in non-road, on-airport ground support equipment and vehicles,” said AOPA and 17 other aviation organizations in an Aug. 7 letter to the administrators of the EPA and the FAA. Such an exemption was recommended in an industry-led working group’s report that addressed immediate actions that could be taken to reduce the DEF risk. While more permanent solutions, such as the complete removal of DEF from airports, are under study, the industry is voluntarily implementing the report’s other recommendations, including “education, storage, labeling, handling procedures, and limiting DEF inventory,” the letter said.

In addition to the aviation groups signing the letter to the FAA and EPA, the National Transportation Safety Board has also expressed concern about the issue, sending a safety alert in July that includes suggestions to help prevent future incidents. And in August , the Diesel Technology Forum, a non-profit group that aims to raise awareness about the importance of diesel engines, fuel and technology, is backing the aviation industry’s stance on DEF contamination.

In an Aug. 6 press release, the Diesel Technology Forum wrote, “We recommend that FBO’s follow the NTSB safety bulletin, and work with diesel engine and equipment dealers and their fuel suppliers to understand the proper use and storage of DEF. FBOs should also institute ongoing training, labeling and storage practices to help ensure aviation safety. The work done by the Aircraft Diesel Exhaust Fluid Working Group and their report in June 2019 has contributed a substantial understanding to the issue, and offers strong short- and long-term recommendations.”

The National Transportation Safety Board’s preliminary report on the double engine failure experienced by the aircraft that diverted to Savannah gives an account of a crisis aloft that unfolded in stages as the jet gradually lost power:

“According to the pilots, about 1 hour and 20 minutes into the flight from APF to IAG, while cruising at 35,000 ft mean sea level (msl), the pilot-in-command was trying to set the N1 speed around 103 [percent], but moments after adjusting power, the N1 speed would decrease. Following a few repeated occurrences of the N1 speed decreasing in this manner, all the engine gauges ‘read regular,’ then the left engine began to 'spool down very slowly.' After unsuccessfully attempting to recover engine power, the crew requested a lower altitude from air traffic control and began a descent with the left engine at idle power. The pilot-in-command then noticed that the left engine displayed no oil pressure and subsequently shut it down.

"Several minutes passed as the airplane descended with the right engine at 65 [percent] fan speed, and while preparing to perform a single-engine approach into SAV, about 8,000 ft msl, the right engine became unresponsive and then began 'spooling down.’ The pilot-in-command declared an emergency and the flight crew performed a straight-in approach to runway 19. The airplane landed without incident and was towed to the ramp,” the report states.

Since then, Carr said, he has had to juggle the flight schedules of other company aircraft, pressuring both the charter and medical-transport areas of the company‘s flight operations. Meanwhile, the two grounded jets are running up thousands of dollars in combined storage costs at the airports where they landed on May 9, he added.

Carr noted that although the airport’s insurance company, Starr Adjustment Services, acknowledged in meetings that the two aircraft won’t fly again—once DEF enters an aircraft’s fuel system “there’s no telling when it might come loose down the road”—he was disappointed with settlement offers that he believed were based on inadequate appraisals. The proposed settlements did not fully consider the special configurations of air-ambulance aircraft, nor did they take into account an air ambulance’s large access door modification that he estimated affects an aircraft’s value by 30 or 40 percent.

As a long-term airport business tenant in Punta Gorda, Air Trek is “looking for some type of amicable settlement, to get new aircraft, and get back in the air,” he said.

AOPA reached out to Punta Gorda Airport for a response to the letter from Air Trek’s law firm and received an emailed statement from Marketing and Communications Manager Kaley Miller: “Punta Gorda Airport’s management values Air Trek as a longstanding tenant and understands this is a difficult situation for all involved. We have retained an experienced aviation attorney from Kaplan, Kirsch & Rockwell to work with our insurance company and keep this pending insurance claim moving forward. We are hopeful that our insurance company and Air Trek will be able to amicably resolve this matter.”

According to a news report, an airport employee who was dismissed following the incident had neglected to follow the airport’s safety policies.

The preliminary NTSB report revealed that “several days after the incident, the lineman realized that he had inadvertently combined a 5-gallon (fuel system icing inhibitor) bucket and a 2.5-gallon diesel exhaust fluid (DEF) container instead of two partially-empty containers of FSII.”