Lower-cost, portable headset-mounted head-up displays for general aviation pilots could result from a forward-looking U.S. Air Force business incubator program. But read this first: PilotVision, currently being developed by California-based SA Photonics, is not yet available for order. 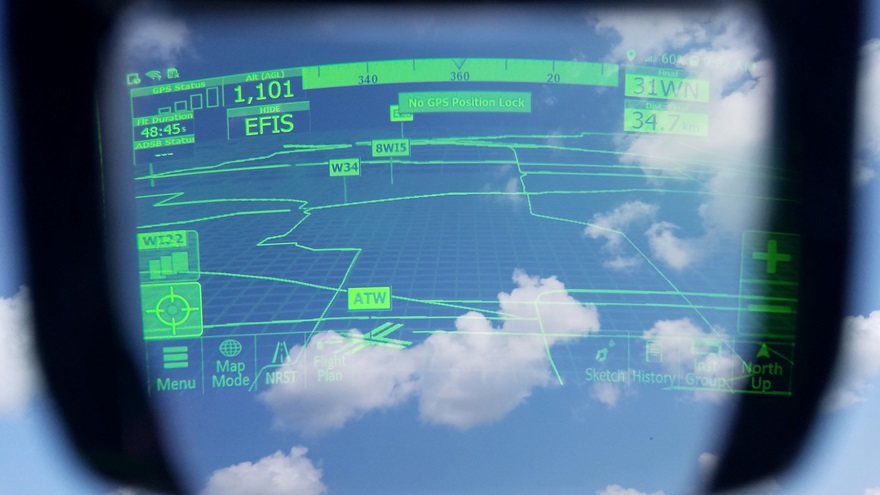 PilotVision is an augmented-reality, head-mounted display (HMD) that can attach to almost any headset used by GA and commercial pilots. Its exceptionally bright display covers a broad (62-degree) field of view, with almost no obstruction to vision around the edges, and even in early generations is easily viewed in bright sunlight. When it’s not needed, the eyepiece can be rotated out of the way, just like a boom microphone. And the product is completely portable, interfacing with an off-the-shelf attitude and heading reference system (AHRS)—PilotVision uses Adventure Pilot’s iFly GPS electronic flight bag—and allows the user to completely customize what’s displayed on the eyepiece.

The field of view, at 62 degrees, feels expansive; the original Google Glass was only 16 degrees. “I actually designed this eyepiece for the next-generation Apache helicopter,” said Mike Browne, general manager of vision products for SA Photonics. His background is in developing military HMDs. And the requirements of an Air Force grant are pushing him to explore a civilian market for the product.

PilotVision started as a low-cost HMD for Air Force transport pilots. “The Air Force said, ‘If you’re going to take our money, we would like you to look at commercializing the technology,” Browne explained. The objective is to scale up production so that per-unit costs go down, saving money for civilian purchasers and for the Air Force.

The technology received a grant from AFWERX, an Air Force technology acceleration program designed to foster innovation and engage entrepreneurs. Product development moves forward in three-month cycles, he said. “What would normally be a five- or six-year program takes 18 months.” 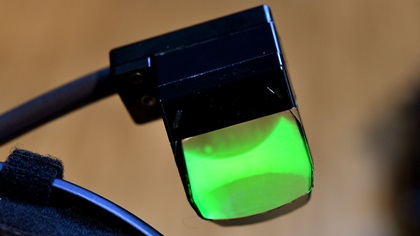 “We’re always looking for partnership opportunities like this,” said Dave St. Clair, Adventure Pilot’s vice president for business development. “Our open architecture lends itself to uses like this.”

For several days during EAA AirVenture in Oshkosh, Wisconsin, in July, Browne showed a week-old development version of the product to GA pilots. A Samsung phone running iFly GPS drove the display; a tablet will be used for later versions.

Using the EFB software, pilots can choose what data to display on the eyepiece, including altitude, airspeed, vertical speed, traffic (if connected to an Automatic Dependent Surveillance-Broadcast receiver), and terrain. If a flight plan is entered in the iFly GPS software it will display rectangular-box highway-in-the-sky symbology. Terrain is displayed as a green grid that on the next generation will be able to turn yellow or red as the aircraft gets closer to the ground. “This is a more intuitive way to see the lay of the land,” Browne said.

The first production units will go to the Air Force in March, with consumer units becoming available during the summer of 2020. “Initially the price is going to be fairly high—about $10,000,” he said. “But the price will come down as production goes up. That’s what the Air Force wants.”

Technical Editor
Mike Collins, AOPA technical editor and director of business development, died at age 59 on February 25, 2021. He was an integral part of the AOPA Media team for nearly 30 years, and held many key editorial roles at AOPA Pilot, Flight Training, and AOPA Online. He was a gifted writer, editor, photographer, audio storyteller, and videographer, and was an instrument-rated pilot and drone pilot.
Go to Mike Collins's Profile
Topics: Avionics, EFB, Technology