Get the app Get the app
Already a member? Please login below for an enhanced experience. Not a member? Join today
News & Media Tuskegee Airman McGee to be promoted to brigadier general

Tuskegee Airman McGee to be promoted to brigadier general

After celebrating his 100th birthday by piloting a Cirrus Vision Jet, retired U.S. Air Force Col. Charles E. McGee is set to be presented with an honorary promotion to brigadier general. The action, included in the National Defense Authorization Act (NDAA), was approved by the House on December 11 and the Senate on December 17, and will now head to President Donald Trump’s desk for signature. 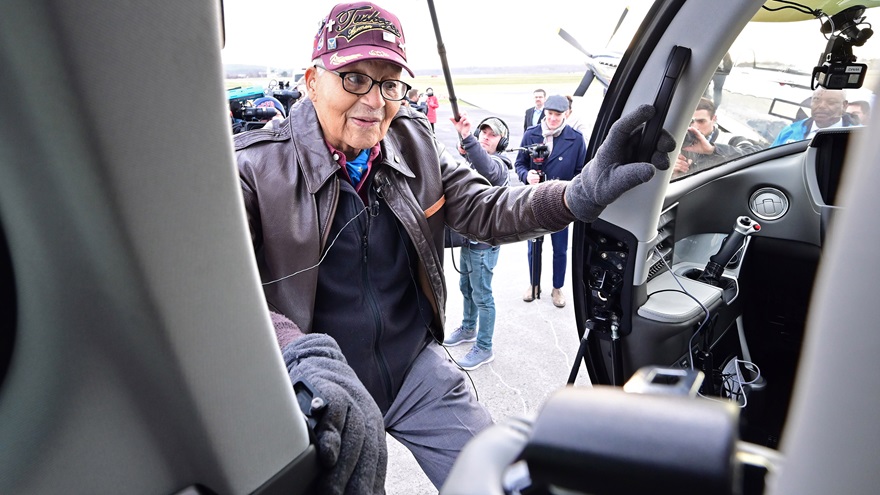 Retired U.S. Air Force Col. Charles McGee, a member of the Tuskegee Airmen and decorated veteran of three wars, boards a Cirrus SF50 Vision Jet for a round-trip flight from Frederick Municipal Airport in Maryland to Dover Air Force Base in Delaware as part of his 100th birthday celebration on December 6. Photo by David Tulis.

Sen. James Inhofe (R-Okla.), Chairman of the Senate Armed Services Committee, told AOPA, “I am proud of the provision included in the FY20 NDAA that allows President Trump to grant an honorary promotion to Tuskegee Airman Col. Charles McGee to the rank of Brigadier General.” Inhofe continued, “I cannot think of someone more deserving of this honor than Col. McGee. Col. McGee, who served with honor and bravery for 30 years in the Air Force, flying 409 combat missions in World War II, the Korean War, and the Vietnam War, where he served as a Squadron Commander. Since his retirement, he has been a strong advocate in the aviation community, and I am pleased to recognize such a deserving individual with this honor.”

“Col. Charles McGee's service to our country is remarkable and fully merits this distinguished honor,” said Sen. Chris Van Hollen (D-Md.) in a December 10 news release. “I was proud to fight for the inclusion of this promotion to commemorate his work and his sacrifice. This progress comes just days after Col. McGee’s 100th birthday, and I could not think of a more fitting recognition from a truly grateful nation.”

Rep. Anthony Brown (D-Md.), a retired U.S. Army Reserve colonel, also supported the measure. “The honorary promotion of Col. Charles McGee to Brigadier General in this year’s National Defense Authorization Act was personal. The recognition of Col. McGee’s heroism is both well-deserved and long overdue.” Brown continued, “As a barrier-breaking African American pilot and commander in the Air Force, Col. McGee’s service has inspired generations of African American aviators who followed in his footsteps. In combat and his leadership and command capacities, Col. McGee always served the United States with patriotism and distinction. His legacy should make us all proud.”

McGee’s son Ron McGee, who is a professional aviator, was appreciative of his father’s recognition. “No words of gratitude will convey the heartfelt thanks for your support and persistence. Dad has devoted his life to serving the United States.”

Yvonne McGee, the patriarch’s youngest daughter, said, “Our hearts are overflowing with joy that Dad's long overdue promotion is finally coming to fruition. For a man whose entire life has been in service to God and country, attaining this, from representatives of the same institution that 78 years ago wanted to limit his participation in the American dream, is the perfect way for a grateful nation to say ' thank you.' We are so proud of our Senator Van Hollen, [whose] support and tenacity was key in making this possible and the best present ever for Dad's 100th birthday!”

McGee’s eldest daughter, Charlene McGee-Smith, authored a book about her father’s life, and said, “We are delighted that the honorary promotion is moving forward. Our father's achievements are most worthy of this recognition. His life of service is an example and inspiration to all.”

AOPA President Mark Baker acted as co-pilot on McGee’s latest flight to commemorate his 100th birthday at AOPA headquarters in Frederick, Maryland, and was enthusiastic in his support of the pending honorary promotion. “Col. McGee and his fellow Tuskegee Airmen overcame struggles many of us could never imagine. The Tuskegee Airmen played a significant role in protecting this country’s freedom against the Axis powers, while also fighting their own battle of acceptance from compatriots. It’s an honor whenever I’m in Col. McGee’s presence and this promotion is well deserved. May his legacy and the legacy of his fellow airmen live on forever and may that legacy help to inspire the next generation of pilots, especially young and minority pilots, to never give up on their dreams.”

Senior Manager of Media Relations and Public Affairs
AOPA Senior Manager of Media Relations and Public Affairs, Jennifer Non joined AOPA in 2017. A former traffic reporter turned media relations specialist, and native Washingtonian, she enjoys traveling and is working toward her private pilot certificate. She was recently honored by Ragan Communications and PR Daily with a Top Women in Communications Award, in the Diversity, Equity & Inclusion Champion category and is also a member of the Board of Nominations for the National Aviation Hall of Fame.
Go to Jennifer Non's Profile
Topics: People, Awards and Records