Get the app Get the app
Get the latest news on coronavirus impacts on general aviation, including what AOPA is doing to protect GA, event cancellations, advice for pilots to protect themselves, and more. Read More
Already a member? Please login below for an enhanced experience. Not a member? Join today
News & Videos events 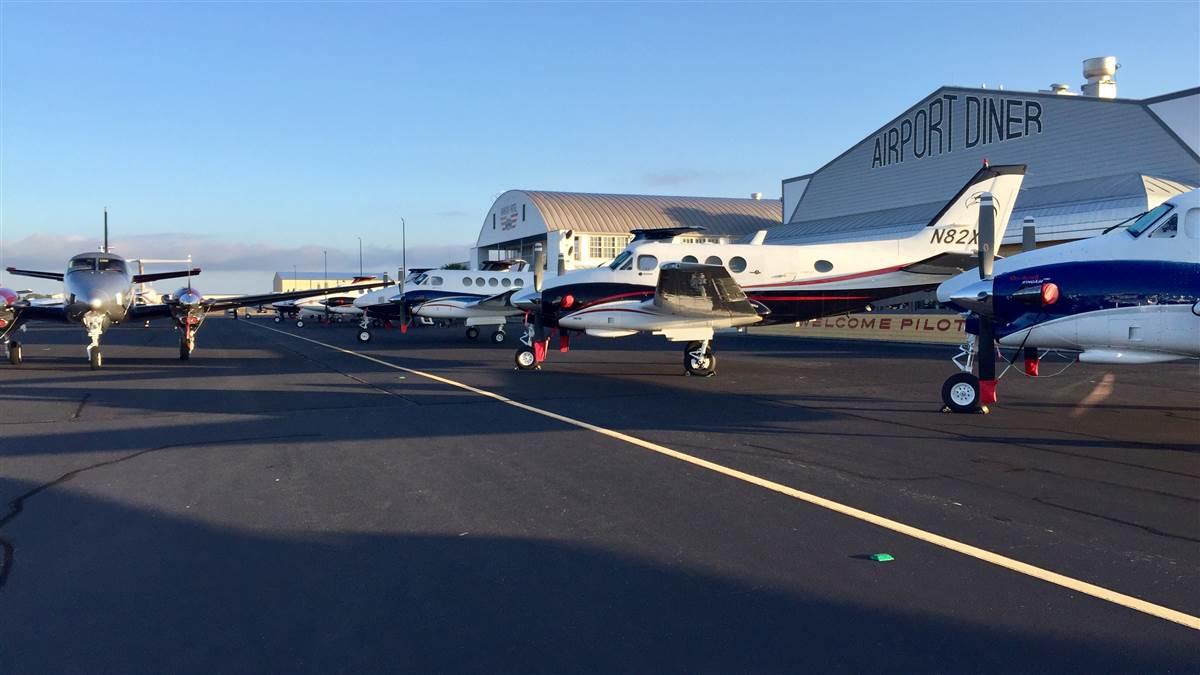 Billed as the largest gathering of Beechcraft King Airs in the world, the King Air Gathering in Fredericksburg, Texas, lived up to the hype. The event drew more than 40 of the endearing turboprop twins. In continuous production for 55 years, the original Model 65-90 has spawned dozens of permutations—many of which have been heavily modified by companies such as gathering sponsor Blackhawk Aerospace and nearly all of which were represented during the three-day event at Gillespie County Airport. More than 100 owners and guests checked into the famed Hangar Hotel, located on the field, with the event housed in the conference center in the large hangar next to the hangar-themed hotel.

The gathering is produced by the King Air Academy, the Phoenix-based company that specializes in training King Air pilots.

While there are social components to the gathering, it is primarily a training event, with an agenda packed with quality speakers including AOPA President Mark Baker, covering subjects ranging from the cognitive challenges of rapid decision making to the principles of datalink Nexrad. Beechcraft and Pratt & Whitney were among the other supporters that shared product updates and operational tips.

King Air Academy manager and co-founder Kevin Carson said the Texas event was the company’s third annual gathering, with next year’s gathering already set for August 27 through 30 at the Beech Factory Airport in Wichita.

Academy co-founder Ron McCalister said the events are like bringing family together. “We all care about the same things. This year the theme is safety—something that resonates with every owner. We’re pleased to see such a wide variety of models here and happy the owners take the time to come learn more about how to safely operate them.” 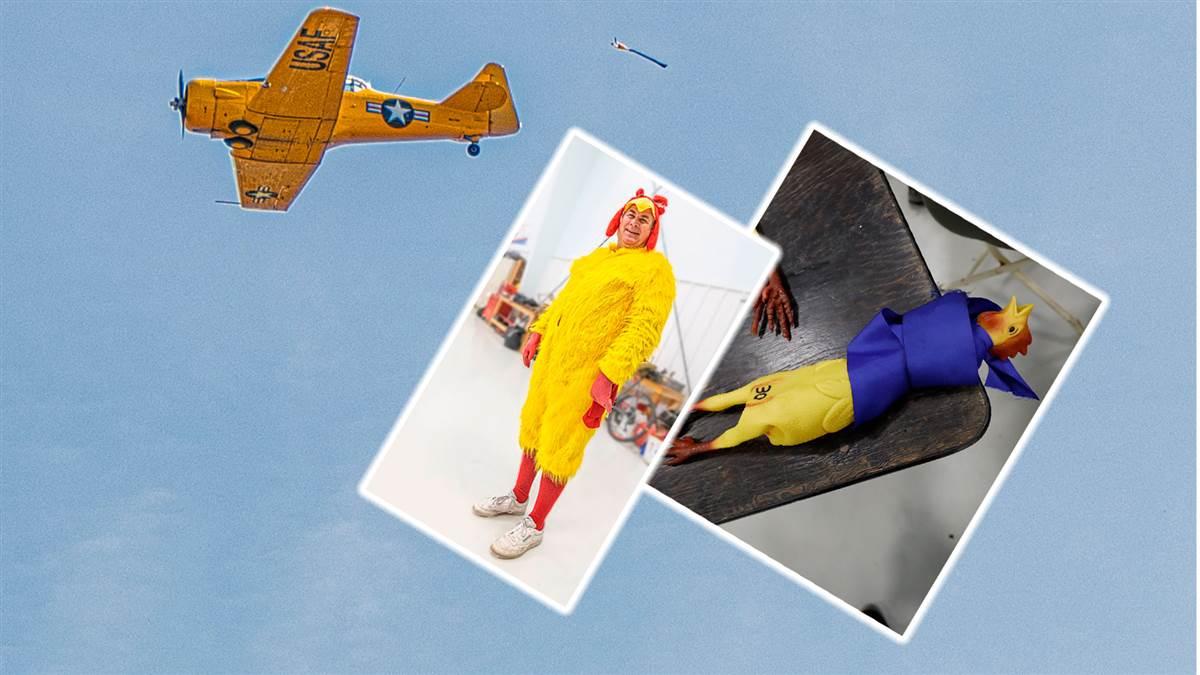 Rubber chickens are thrown from the aircraft and targeted at Captain Peeps (bottom left).
Photography by Al Marsh

Chickens realize their dream to fly

It isn’t easy being a chicken. Just ask Zeke Przygocki.

Captain Peeps—Przygocki’s official title for the day—was the target of efforts by 29 pilots to pelt him with rubber chickens from their aircraft during Airport Day at Easton/Newnam Field on Maryland’s Eastern Shore. The pilots had just completed a formation flying clinic taught by the RedStar Pilots Association. The kids loved it.

Until that day, Przygocki’s career had been on an upward spiral, graduating with a degree in criminology before commanding an Air Force C–5 Galaxy crew, followed by his current career as the captain of an Airbus A320 for United Airlines. Just after that career apogee came the job of sweating buckets in a chicken suit followed by children throwing marshmallow Peeps at him—thus, his title. Remember, if you seek an airline career, you too could end up in a hot, furry chicken suit.

“I want to see the chickens drop,” one little boy at the show said before the contest. “Do they put them in bombs?”

No, they dress them in capes and sometimes makeup, since many of the bombardiers are women, or release them from missile-like tubes powered by the wind. No chickens hit the pickup truck bed from which Captain Peeps taunted the contestants.

Competition among the pilots who flew four different models of aircraft appeared to be good-natured, although there is room for doubt. Winner Joe “Zach” Czachoroski got his rubber chicken closest to the pickup truck while flying his Van’s Aircraft RV kitplane.

“We used to laugh at the RVs,” said RedStar Pilots Association’s Carey O’Donnell, who judged the contest. The pilots first entertained the crowd of about 3,000 with a mass formation using their newly attained skills before breaking off to put Przygocki in their sights.

The judge was not at all happy with the RV win, which brings us back to the question about the “good-natured” competition. “The T–6 guys hate the T–34 guys who hate the RV guys who hate the Yaks who hate the Epsilons,” O'Donnell said. Nanchang CJs and North American T–6 Texans, two of the aircraft at Easton, could be characterized as brutish school bullies to the RVs’ straight-A students and teacher’s pets. The appearance of the two aircraft bears out the comparison. RVs are clean little aircraft that couldn’t roar even if the engine needed a tune-up, but CJs and T–6 Texans awaken angry and stay that way; no showers or deodorants, spitting black oil onto their already grimy bellies—and liking it. The final model flown was the Socata TB 30 Epsilon military trainer that seemed to have escaped peer insults, as had the Beechcraft T–34 Mentor.

About that “judge” title: The only place O’Donnell ever acts as a judge is at the RedStar Kangaroo Court, which makes unfounded accusations against its formation students for piloting infractions, imagined or real—mostly imagined. All are found guilty just the same at a closing night banquet. To assure honesty, the accused are required to take a sip of truth serum (high-octane beer) before testifying. There are fines to be paid, but lower fines for the winner of the chicken drop. That and bragging rights, a “huge benefit with this crowd,” O’Donnell said, are the only prizes. The group also happily humiliates the worst chicken bomber in the group, which for 2019 was Jim Daris flying a Nanchang CJ–6 that landed with a clever rubber chicken clinging to the tail.

The event is useful for another purpose: education. Airport Manager Micah Risher said his ACE program (aviation career education) has drawn 100 students to its classes in air traffic control, drones, aviation maintenance, and pilot training. ACE officials had a display at the event. The chicken drop wasn’t the only event that drew a crowd—car museums and automobile clubs displayed customized classic cars, while local pilots displayed and flew antique aircraft, including the takeoff of a Fairchild Republic A–10 Thunderbolt (Warthog).