Get the app Get the app
Already a member? Please login below for an enhanced experience. Not a member? Join today
News & Videos Mentor Matters: Synthetic vision 101

Knowing where you're going

By Neil Singer
I don’t really fly in the mountains much, so I don’t need synthetic vision. I’ve lost count of how many times I’ve heard this sentiment echoed by pilots flying an aircraft with a flight deck that could support synthetic vision, but that hasn’t yet been upgraded to enable it. 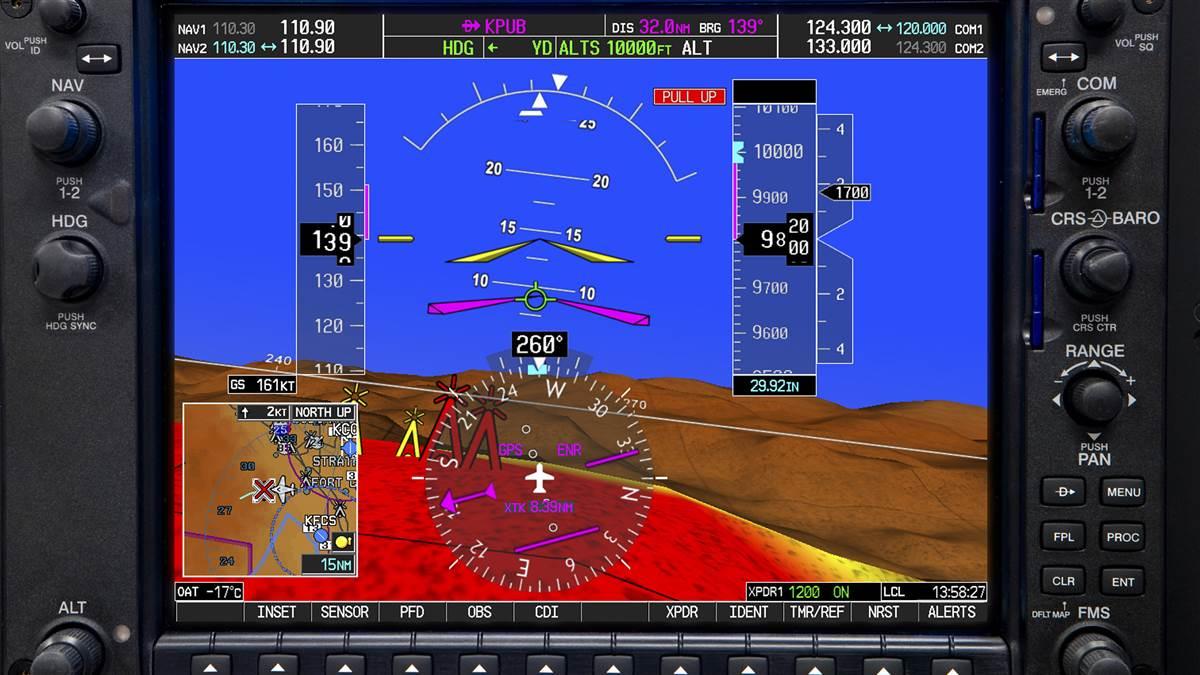 True synthetic vision has its attributes, as when commanding the pitch and bank to fly to avoid high terrain (above). But it’s also a valuable tool in carrying out precise descents in both visual and instrument conditions.
Photography by Mike Fizer

Given that many of the promotional screen shots the manufacturers distribute to herald the utility of their synthetic vision technology prominently feature red mountain tops mere seconds away from the aircraft, it’s understandable that some pilots see the value of synthetic vision in helping prevent controlled flight into terrain (CFIT) accidents. But even though synthetic vision is a powerful tool in helping prevent CFIT accidents, a pilot who exclusively flies in the flatlands can benefit tremendously from knowledgeable use of this technology.

Best of all, the main benefits of synthetic vision come to the pilot without any action required—no button-pushing or knob-twisting needed. Synthetic vision is always actively pushing useful information to aid the pilot’s situational awareness; pilots need only train their eyes and mind to perceive and use it. The first step toward extracting full value from synthetic vision is to understand the information presented. 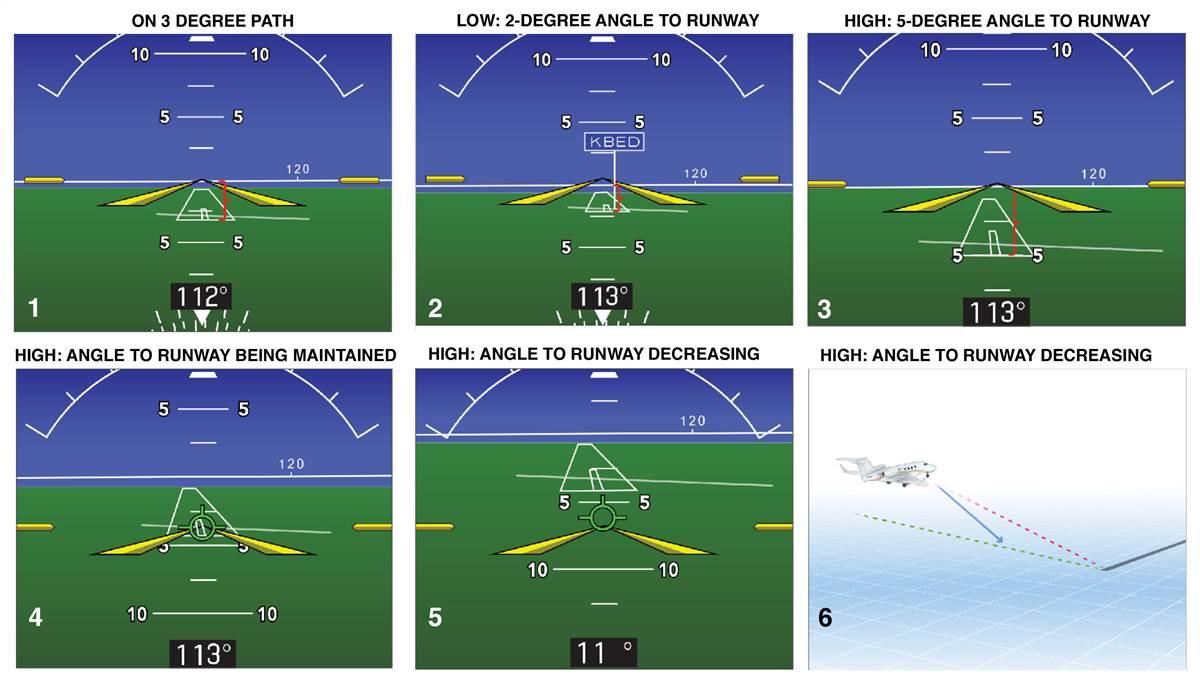 The angle to the runway is shown by the location of the threshold on pitch scale. When the runway threshold sits 3 degrees under the zero pitch line (1), the aircraft is on a 3-degree path. A pilot can quickly tell if too low (2) or too high (3) by looking at the relationship between the runway symbol and zero pitch line. (Flight path markers not shown to eliminate clutter.) 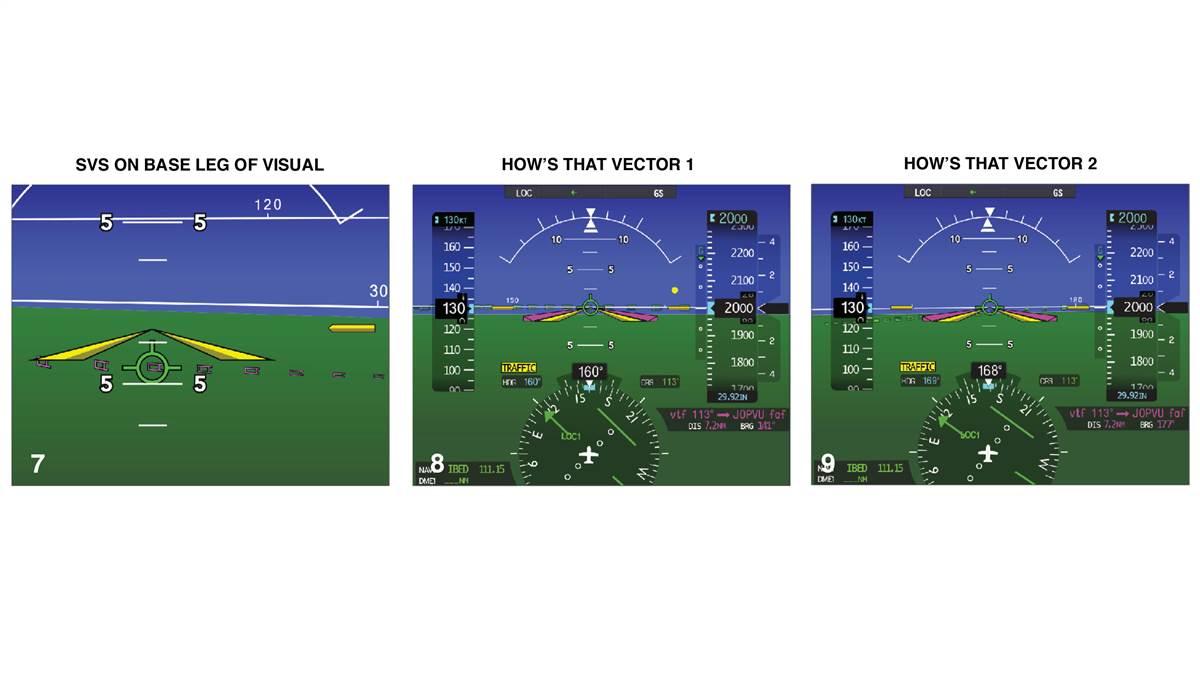 (7) By activating an approach with vertical guidance and ensuring the FPM is centered over a pathway box, the pilot is guaranteed to turn final on the desired glidepath.

(8) the FPM shows the localizer will be intercepted before the glideslope, as the pathway boxes have not begun descending yet at the point of intercept.

(9) here the FPM shows the glide-
slope (as outlined by the pathway boxes) will be below the aircraft when the localizer is intercepted—a better vector is needed.

Lateral drift because of crosswind can also be immediately observed by watching the FPM’s movement to the left or right. By steering so as to align the flight path marker with the runway symbol of the landing runway, the pilot knows that the flight path is vertically and laterally taking the aircraft to the runway. This instant feedback has the effect of bringing the elements of flying a visual approach to every instrument approach, even in the lowest weather. By cross-checking the flight path marker’s instantaneous movement with navigation guidance on the HSI, the pilot can immediately perceive if the crosswind correction or descent angle needs to be adjusted—before the HSI needles will have moved.

Even better, when approaching a runway without vertical guidance in the form of an instrument approach or visual indicator, the synthetic vision information can be used to maintain a perfect descent. The location of the runway symbol on the PFD’s pitch scale is also the descent angle to the runway. If the runway threshold sits exactly at the negative-3-degree point on the PFD, the pilot knows the descent is nominal. If the runway sits at a much lower or higher point on the pitch scale, the pilot can instantly see that correction is required and use the flight path marker to ensure that enough control input is made to adjust the descent angle.

Many Garmin synthetic vision systems have a depiction that is often the least appreciated of its features: the highway in the sky (HITS) pathway boxes that depict the horizontal and vertical path of the active flight plan. If pilots haven’t spent time adapting to the pathway depictions and integrating them into their scan, the boxes may appear cluttered and distracting, to the point that pilots frequently will turn them off and not use them.

This is unfortunate, as the pathways can provide information that can’t be found anywhere else. Besides the obvious value of giving immediate feedback if the aircraft will be diverging from the programmed path—so depicted if the flight path marker doesn’t fall inside all the boxes—the boxes can be used when approaching the final leg to an airport from a base position on visual and instrument approaches. This guidance can be vital in preventing unstabilized approaches on final.

In the case of a visual approach, it can be difficult to plan the vertical path on a base leg to a runway. Visual cues are difficult to interpret when approaching at 90 degrees to the runway, and often pilots will turn final to find themselves higher than anticipated. With synthetic vision, if the runway has a published approach with vertical guidance, rolling out right on the proper glidepath is simple. By loading the approach and activating the leg to the runway threshold, the pathway boxes will be visible in profile. As they will be descending to the runway on the desired angle, steering the FPM so that it lies over any pathway box will ensure the aircraft is descending on the base leg so as to perfectly intercept the glidepath as the aircraft turns onto final.

Similarly, when being vectored for an instrument approach, the pilot can easily see if the vector will provide adequate time to intercept the lateral path before the vertical, or if the airplane is going to be “slam-dunked,” as can be common in some parts of the country. If the flight path marker intersects the final approach segment before the descent will begin, all is well. But if it shows intercept at or after the flightpath boxes start sloping down to the runway, a query to ATC may be in order, and/or preparation for an aggressive descent to the glidepath.