Get the app Get the app
Already a member? Please login below for an enhanced experience. Not a member? Join today
News & Media These police drones are first on the scene

These police drones are first on the scene

Law enforcement air support is typically expensive and summoned (if it’s available at all) after first responders on the ground reach the scene. A California community is dispatching drones to flip that script, with encouraging results. 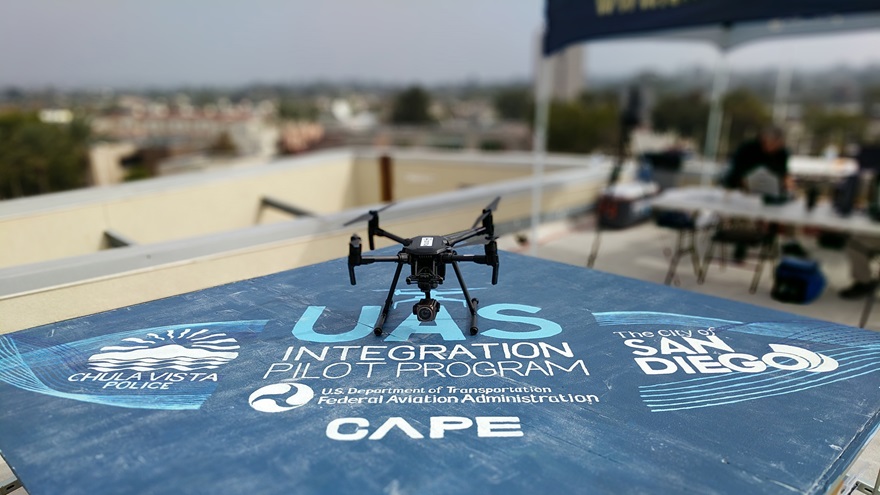 The Chula Vista Police Department in California is dispatching DJI drones to emergency calls from the rooftop of police headquarters. Photo courtesy of Cape Productions Inc.

Just south of San Diego, Chula Vista is well-suited to test the concept of drones as first responders, flying to the scene under their own power rather than tucked in a fire truck or a squad car. The city’s police headquarters is one of the tallest buildings in an area surrounded by densely packed homes and commercial buildings, miles from the nearest runway with clear views of nearby rooftops and roads.

Interstate 805 is a little over a mile to the east, Interstate 5 is a mile to the west, and the Sweetwater River is about that far north of the rooftop where drones take off, flying ahead of the cars below to put cameras on calamity or crime, and stream it all live to a network of watch commanders and responding personnel.

There’s not much to get in the way of even a relatively low-flying drone or block the view of a pilot watching from that rooftop. That pilot is able to focus full attention on the drone because, after establishing electronic limits to ensure the unmanned aircraft remains safely clear of obstructions or areas of high radio interference, the pilot turns control over to another officer who guides the drone to the desired location, and maneuvers it for the best view within the limits set by the remote pilot in command on the roof. 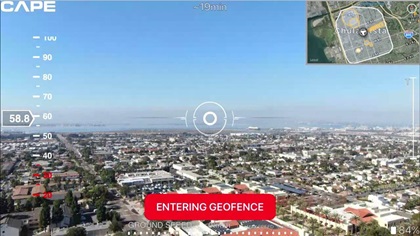 The remote pilot can intervene at any time. A mode switch or twitch of a control stick will immediately return full control if another aircraft enters the area, said Kabe Termes, director of business operations for Cape Productions Inc., which built the “Aerial Telepresence” platform. The platform makes the drone hand-off possible and allows responding officers to view the live video feed on mobile devices in patrol vehicles as well as in the command post.

“This is an entirely new and different concept for emergency response,” said Termes, an FAA-certificated remote pilot and private pilot who wrote the procedures that Cape recommends to all of its customers. Termes helped develop the program in conjunction with the Chula Vista Police Department, which was among 10 around the country chosen to test the limits of what drones can safely do and shape future regulations of the industry.

Launched in 2018, the federal Unmanned Aircraft Systems Integration Pilot Program enabled a variety of ambitious use cases, including the delivery of a popsicle to a Virginia toddler and an Oklahoma project that uses drones to spread dried corn as bait to trap feral pigs. Some of these will involve flying drones beyond the pilot’s line of sight, though Termes said that was not the standard operating procedure in Chula Vista, where they fly off-the-shelf DJI models. The police drones here include the Mavic 2 and Matrice M200 models; the latter is the larger of these and measures about 35 inches between each of its four propeller hubs. Termes insists an M200 is still visible about a mile away, even with an unaided eye.

“We actually just have to keep close eyes on it,” Termes said. “It turns into just a little pinpoint just out on the horizon.”

A one-mile circle around the rooftop five stories up covers about three square miles, a sizeable chunk of real estate into which a recent police chase fit neatly. Termes described a Feb. 12 call to respond to a domestic assault in progress. The police drone arrived before any ground vehicle was able to reach the scene, and captured images of an altercation in progress involving a man on a motorcycle and a woman in a car. Both vehicles left the scene as the altercation escalated into a pursuit, the drivers perhaps unaware that a flying camera was tracking their progress as they traversed more than a dozen city blocks, including some double-backs.

Guided by the aerial unit, the police closed in and made two arrests, “a really good example of the power of this drone as a first responder model,” Termes said. “Having the drone overhead really made a big difference.”

Chula Vista police began building their drone program in 2015, forming a committee in December of that year to study the technology and how it can be used. They engaged the public in a wide-ranging discussion of the potential of the technology, as well as policies to protect privacy and public safety. The department also worked with the media, and posted details including policies and procedures on the department website. The department produced a video of a simulated active shooter response that was posted on YouTube days after the first live flights launched on Oct. 22.

As of Jan. 31, according to the department website, Chula Vista Police Department drones (which operate four days a week during daylight hours) had responded to 231 calls for service and participated in 20 arrests.

“Since launching the DFR program, the program is already having a significant impact on operations and resource management. Real-time aerial visibility is critical when informing decisions, and in an emergency situation, is vital to the safety of our officers and citizens,” said Chula Vista Police Chief Roxana Kennedy, in a news release. “We’re looking forward to continuing our work with Cape, and expanding the DFR program to use drones to improve safety and efficiency, and reduce crime in Chula Vista. These early results are already proving the impact of the Drone as a First Responder model, and it’s an honor to be a part of shaping the future of drone integration in the United States.”

Termes said the Chula Vista Police Department’s certificate of authorization from the FAA, a regulatory tool available to public safety agencies, enables police drone pilots to avoid running afoul of other Part 107 drone regulations, including current prohibitions on flights over people and moving vehicles. The Mavics and Matrices do not conduct routine patrols or surveillance, traversing the urban landscape only when requested to respond to high-priority calls.

It would be plainly illegal for most remote pilots to fly over busy city streets, packed with pedestrians and moving vehicles (though overflight of stationary vehicles with people inside is permitted; insert your own joke about Southern California traffic here).

“It absolutely would be, which is why this is a Chula Vista Police Department operation,” Termes said.

The goal of the federal program, and Cape’s goal as a business, is to expand and replicate the use of drones as first responders elsewhere. Termes said the experience gained in Chula Vista will help build a case for expanding the visual-line-of-sight envelope to allow operations in which the drone is not actually visible, though still close enough that the area where it is flying can be observed and manned aircraft effectively avoided.

“We would like to push that out to two or three miles,” Termes said. “You get out to one mile it’s pretty damn hard to see the drone ... what we feel like we’ve demonstrated here is that at that distance, we can still maintain full safety of flight. I can still see that airspace, I can see manned aircraft in that area.”

Termes said the company fully supports the FAA’s pending push to require electronic position reporting and identification for all drones.

“We’re firm believers that if you’re flying anything in U.S. airspace, you’d better be reporting your position,” Termes said.

Meanwhile, Cape is flying drones in Mexico to give potential customers and the public a chance to try remote telepresence firsthand. Visit this page to sign up, and when the drone is flying you can take control and give it a whirl. 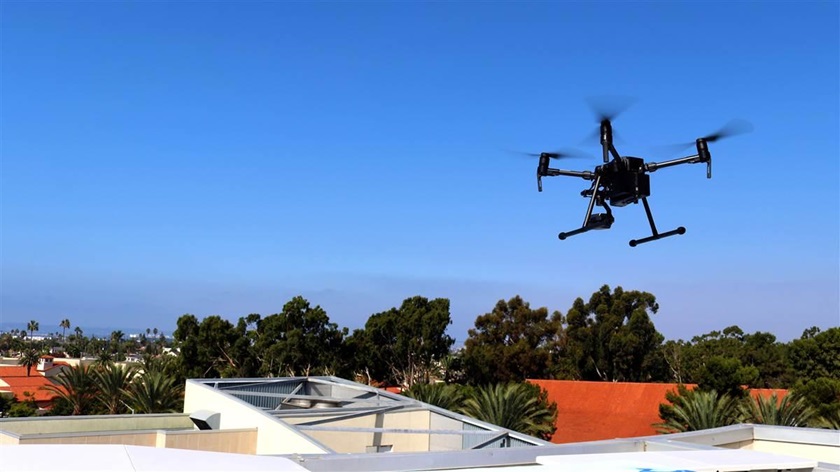