Get the app Get the app
Already a member? Please login below for an enhanced experience. Not a member? Join today
News & Media Your rocket ride is almost ready

Your rocket ride is almost ready

Civilian spaceflight may now be months away

The Feb. 22 flight was the second by the suborbital rocket born from the drawing board of the legendary Burt Rutan and backed by Branson, who aims to win a race to carry paying customers into space. The firm announced its fifth supersonic test flight and the second to reach space over Mojave, California, noting it was the first to include a third crewmember. Moses sat behind pilot Dave Mackay and copilot Michael “Sooch” Masucci, who joined a growing list of humans to fly above at least one of the (somewhat arbitrary and often argued-about) lines that mark the beginning of space.

The hybrid rocket motor propelled them to Mach 3.04 and an apogee of 295,007 feet, and the video posted soon after included a view of Unity “feathering,” folding tail booms perpendicular to the fuselage so it could fall back to Earth like a maple seed at a stately Mach 2.7. (This feature was the Rutan innovation that is arguably most important to making commercial spaceflight affordable, since the low-speed reentry eliminates the need for heavy heat shields and a lot of the rocket fuel that would otherwise be required to achieve the altitude and velocity.)

A kilted bagpiper playing as he emerged from the spacecraft, Mackay (who had just become the first astronaut born in Scotland) was not at a loss for words.

“Beth, Sooch and I just enjoyed a pretty amazing flight which was beyond anything any of us has ever experienced,” Mackay said in remarks included in Virgin Galactic’s press release. “It was thrilling yet smooth and nicely controlled throughout with a view at the top, of the Earth from space, which exceeded all our expectations. I am incredibly proud of my crew and of the amazing teams at Virgin Galactic and The Spaceship Company for providing a vehicle and an operation which means we can fly confidently and safely. For the three of us today this was the fulfillment of lifelong ambitions, but paradoxically is also just the beginning of an adventure which we can’t wait to share with thousands of others.”

Hundreds of aspiring space tourists have paid $250,000 to get on the list for similar flights behind Branson, who hopes to get his own ride on July 16, the fiftieth anniversary of Apollo 11’s launch.

“Having Beth fly in the cabin today, starting to ensure that our customer journey is as flawless as the spaceship itself, brings a huge sense of anticipation and excitement to all of us here who are looking forward to experiencing space for ourselves,” Branson said in the Virgin Galactic press release. “The next few months promise to be the most thrilling yet.”

Potential thrills for Branson and the team include a possible Collier Trophy. 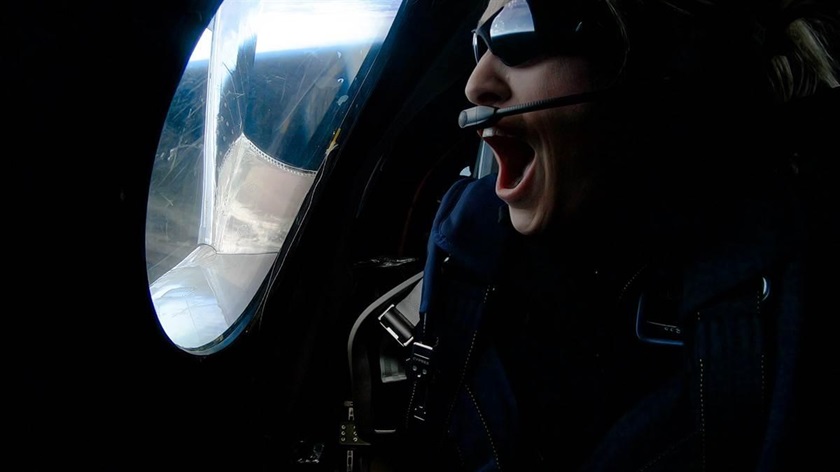