Get the app Get the app
Already a member? Please login below for an enhanced experience. Not a member? Join today
News & Media Teen aviator circles world solo in Piper Lance

Eighteen-year-old Mason Andrews circumnavigated the Earth in his family’s PA–32 Piper Lance during a 76-day solo flight for charity from July 22 to Oct. 6, 2018. He named the green-and-white N7278C the Spirit of Louisiane in a modern-day nod to Charles Lindbergh’s history-making Atlantic Ocean-crossing flight in the Spirit of St. Louis.

“I’ve always been inspired by Charles Lindbergh and read most of his books,” said the Louisiana Tech University professional aviation program student and instrument-rated pilot. His plan was to fly the 3,500-mile transoceanic flight to bring awareness for MedCamps of Louisiana, an outreach that provides free summer camps to those who have Down Syndrome; Spina Bifida; developmental disabilities; or hearing, speech, or visual impairments. The trip raised over $33,000 for the charity, “and since then, even more has rolled in.”

During the flight planning process, Andrews contacted other earthrounders including Adrian Eichhorn for coaching and “talked to him for hours and hours at Oshkosh [during 2018 EAA AirVenture]. He gave me a lot of the crucial advice I needed for the trip.”

Andrews soon learned that “flight planning was a lot more than anybody would have ever expected,” but his dad, Jeb, filled the support role of planner and coach. The senior Andrews has “about 40 or 50 hours” flying out of Shreveport Downtown Airport but didn’t earn a private pilot certificate because of work and family commitments.

The young pilot said a lot of people followed his global progress via social media and through the MedCampsMission.org website. One of those offering wishes for a safe journey was Allie Hines, a nursing student who emailed him with moral support. Andrews complimented her on becoming “a good flying companion,” and the two are now a couple.

The young earthrounder flew to, or over, 22 countries after departing Louisiana’s Monroe Regional Airport. A 160-gallon ferry tank inside the aircraft plus the Piper’s normal 94 gallons of fuel allowed him to fly for nearly 16 hours and over 2,000 nautical miles, “more than anyone would ever like to fly, especially in a small airplane over a [large] body of water.” 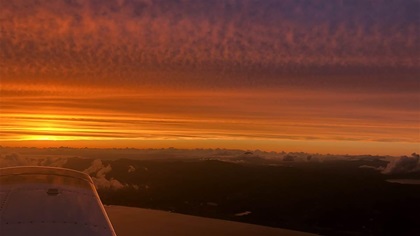 From Monroe, Andrews flew to Republic Airport in Farmingdale, New York, then northern Canada, before crossing Greenland to Iceland. His Atlantic Ocean crossing took him to Le Bourget Airport in Paris, where he landed in Lindbergh’s footsteps.

Other stops around the globe included Egypt, Jordan, India, Malaysia, Christmas Island, Australia, Fiji, American Samoa, Hawaii, and California. He also chalked up the potential for multiple aviation world records that the family hopes will soon be certified.

His favorite part of the trip was landing in Paris at night and seeing the Eiffel Tower as he made his final approach. Weather forced him to stay put in the Philippines for nearly three weeks, from Sept. 2 to Sept. 21, and nearly doubled the projected 40-day journey.

Andrews recalled a particularly harrowing day when his VHF radios were out of range, his high-frequency radio failed, and relay calls went unanswered as he negotiated a path around significant unforecast thunderstorms between the Philippines and Okinawa, Japan.

After he clipped the Republic of China’s airspace near Taiwan, Andrews was intercepted by a Taiwanese F–16 fighter jet. “It was the fastest airplane I’ve ever seen—it was insanely quick—and then I lost him” in the clouds before “it came up five feet” from his left wing and flew in formation as they skirted the storm. The jet nudged him away from China and Andrews re-entered Japan’s airspace as soon as he was able. “I became a bit of a national celebrity in Taiwan” because of the incident. He later learned he “was all over the news with about 1.6 million video views about my intercept.”

During a “10- or an 11-hour flight you’re going to run into inclement weather. It doesn’t matter if you’re in the desert, the Arctic Circle, or the tropics. You’ve got to be prepared for it and have a way out at all times,” he emphasized. 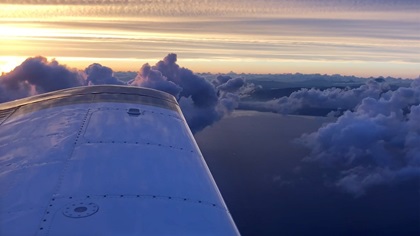 He also experienced a nighttime in-flight emergency when severe thunderstorms blocked his route from the South China Sea. He determined his best bet was to land at Subic Bay International Airport, the first airfield along his route through the Philippines, but it was closed and the lights were off. When he was refused entry, he declared the emergency.

"I wasn't demanding but I needed their help" and "center couldn't clear me to land. After I landed, the police showed up and I fully thought I was getting arrested. They were actually really excited to see me and said, ‘We’ve heard about you.’ Basically, they shook my hand and then I went on my way.”

Andrews first took the controls of an aircraft during a tandem paraglider flight when he was 14. “Free flight was a completely different experience” from commercial airline flights, and it drove him to earn his private pilot certificate in 2017. He built up about 200 hours in the family’s Lance and knew the aircraft’s systems “pretty well” before attempting the worldwide journey.

He learned of the medical outreach organization from a family friend whose son was a camper. Andrews was so moved that he worked as a camp counselor for three summers and wanted to become further involved. “I realized it was a really unique opportunity to raise awareness for something that I was really passionate about. I thought it was a great thing to tie aviation and the MedCamps program together, and to raise awareness for both,” he explained.

He has his sights set on becoming a career pilot for UPS or FedEx and is building time flying his father to medical business clients throughout the Southeast while earning his college degree.

Helping fund MedCamps was “something I’m really proud of,” added Andrews. “The more people learn about these types of things, the more they will be inspired to do them, just like I was.” 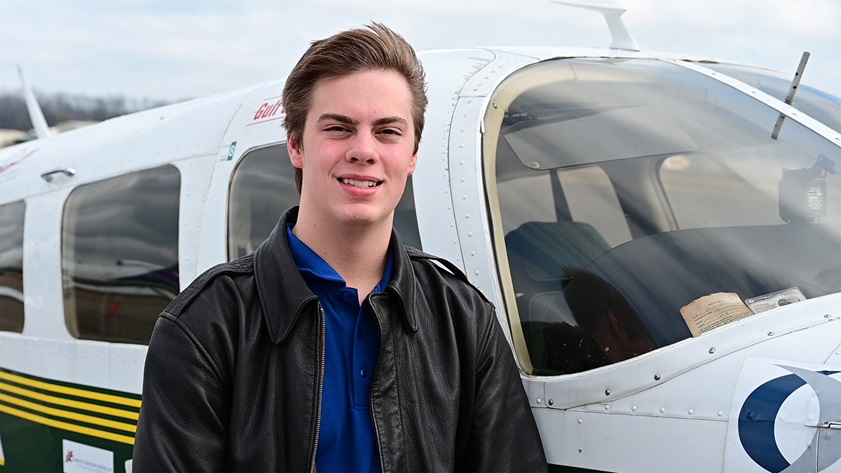