Get the app Get the app
AOPA Members DO more LEARN more SAVE more - Get MORE out of being a pilot - CLICK HERE
News & Media Pilots, crew, passengers celebrate 2009 'Hudson miracle'

Editor's note: This article was updated Jan. 17 with additional information.

On Jan. 15, 2009, US Airways Flight 1549 passenger Vallie Collins was seated on the last row, in 26D, and survived the Hudson River ditching of a damaged Airbus A320 only to face another potentially life-threatening challenge.

A flood of 36-degree Fahrenheit water rushed past her neck, soaked her to the bone, and threatened to drown her as the aircraft began sinking.

During a 10-year anniversary celebration of the event that became known as the “Miracle on the Hudson,” the Maryville, Tennessee, resident had nothing but compliments for Captain Chesley “Sully” Sullenberger III and First Officer Jeff Skiles, who expertly glided the damaged Airbus A320-214, and the crew who helped all 155 passengers to safety.

“I tell people I survived two emergencies in a row that day,” she said, reflecting on the flight that left New York’s LaGuardia Airport at 3:26 p.m., bound for Charlotte, North Carolina. Collins motioned dozens of fellow travelers toward the wing exits as water rushed in through the rear of the crippled aircraft. Its tail cone-mounted auxiliary power unit was sheared off from the impact and left a gaping hole. “All I thought about at that moment was surviving,” she remembered. Passengers climbed out onto both wings and waved at arriving tugboats and ferries as Sullenberger, a former fighter pilot with more than 40 years flying experience, performed a final cabin sweep. 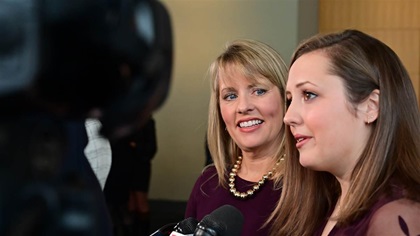 After she was plucked from the wing and delivered to the ferry boat Yogi Berra, Collins, who was wearing a cashmere sweater and wool pants to ward off New York's winter chill, stripped off her drenched sweater to warm up. “I was already so cold, and I thought it was probably making me even colder. I figured if the male passenger across from me hadn’t yet seen a woman in a bra, then maybe it was time.” When the ship’s captain saw her predicament, “he literally took off his shirt and wrapped it around me because I was shaking so bad,” she continued. About a year later she tracked down the Yogi Berra’s captain and returned the loaned shirt.

“It shows the best of humanity,” said Collins while visiting the aircraft and artifacts contributed by fellow passengers and crew at the Carolinas Aviation Museum near Charlotte Douglas International Airport in Charlotte, where the Airbus commands a striking centerpiece.

Skiles, a 737 captain, had just received his Airbus 320 type rating and was on his inaugural flight as the ship’s first officer. During a Jan. 15 panel discussion at a luncheon honoring the flight’s crew and passengers, Skiles said he was at the controls of the aircraft as it struck the flock of birds. “I’ve made Sully everything he is today,” he joked. Skiles said he valued “every bit of training” he had as a pilot, and further complimented the US Airways/American Airlines training regimen.

“This was a novel, unanticipated event for which we had never specifically trained,” said Sullenberger. “We had to take what we did know, adapt it, and apply it in a new way to solve a problem we had never seen before, and get it right the first time, in less than three-and-a-half minutes.” He said the emergency unfolded so quickly “we didn’t even have time to talk about it. I met Jeff [Skiles] on Monday, at the beginning of this trip, three days before [what would become] the challenge of a lifetime.” Sullenberger credited lifelong learning and team skills for the successful outcome. “I had to have a paradigm of how to solve any problem in an airplane and apply it to this situation to impose order on chaos.” He continued, “We’re standing on the shoulders of everybody else who has done this job before us—who has made this system so robust and resilient—who has the dedication to do whatever it takes to save every life.” 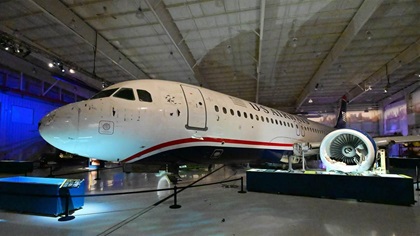 The crippled airliner is shown warts and all, adding authenticity and providing visitors with a chilling reminder of the harrowing experience. There are hack marks on the fuselage left behind by rescue workers, jagged teeth of metal made by saws that separated the aircraft’s silver wings from its white-and-blue fuselage, shoe marks on the wing skins, and other bruises that would make many airplane owners cringe.

The jet was fished from the salt- and fresh-water-fed river and disassembled during the accident investigation. The aircraft, which stopped New York’s rush hour traffic in 2009, again stopped traffic when it was trucked to the museum on a flatbed in 2011. Museum President Stephen Saucier said displaying the "Hudson Miracle" aircraft as the main attraction helps young people focus on science, technology, engineering, and math and can lead to aviation careers. “We must attract these opportunities to inspire and motivate our children to get them ready for the future,” he told crew, passengers, family members, and business leaders during a tenth anniversary luncheon honoring those affiliated with Flight 1549. The museum, which also houses other general, commercial, and military aviation artifacts, has plans to move soon and is reaching out to the local community for options, Saucier noted.

Passengers greeted each other as they silently viewed the aircraft with friends or loved ones. Casey Jones of Jacksonville, Florida, was in seat 7A ahead of the wing and near the left engine when disaster struck. “It amazes me, seeing the plane, seeing the engine, and the damage it sustained. It’s really amazing to me that I’m here talking to you today.” 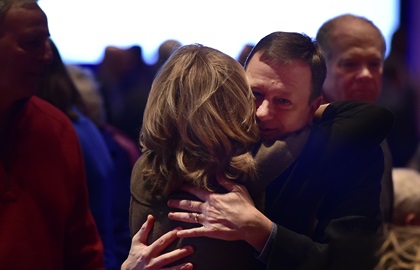 He said that immediately after takeoff, “I felt a big jab, like a huge bump, and then smelled an odor like electrical wiring and burnt flesh. We were gliding down, and we didn’t have much altitude at that point. We turned left and I could see the airport beyond the wing. I thought we were headed back over there but the captain turned left again, pointed us down the river and made the announcement to brace for impact. My wife and eight-year-old son were on another airplane [from New York] and all I could think was that I wanted to tell them I loved them, but there wasn’t much time. My fingers were shaking so badly that I couldn’t punch the code to unlock the phone” before the airplane hit the water.

After the crash he scrambled to the left wing “in water up to my knees and waited for 17 minutes,” he recalled. “I know it was exactly that long because of the telephone calls I was getting and the messages that kept popping up.” The river swallowed the aircraft about seven minutes later.

An NTSB executive summary of the accident noted the probable cause as “the ingestion of large birds into each engine, which resulted in an almost total loss of thrust in both engines" after the airliner encountered a flock of Canada geese immediately after takeoff. 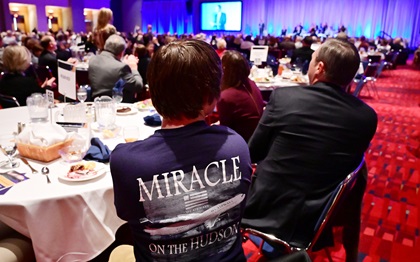 The flight was intended for Charlotte Douglas International Airport and ended in less than two minutes. Passengers were evacuated within about 17 minutes, the report confirmed. The report also credited Sullenberger and Skiles with life-saving “decision-making” and complimented them for optimizing “crew resource management during the accident sequence." The summary noted the aircraft was outfitted with overwater survivor apparatus that and the “fortuitous use” of the forward slide and rafts contributed to the safe outcome, as did outstanding performances from the flight’s cabin crewmembers. River boats gearing up for the evening rush hour, their proximity, and “immediate and appropriate response” of first responders helped avoid a catastrophe.

One flight attendant and four passengers were injured during the ditching and evacuation.