Get the app Get the app
Already a member? Please login below for an enhanced experience. Not a member? Join today
We will be performing maintenance on our systems Sunday, 10/17/2021, beginning at 12:00 A.M. ET and ending at 6:00 A.M. ET. During this time, you may experience intermittent service outages. We appreciate your patience.
News & Media FAA sets New Jersey TFRs, notes past violations

The FAA has issued several VIP temporary flight restrictions (TFRs) to be in effect between July 5 and July 7 in the area of Morristown and Bedminster, New Jersey, where President Donald Trump’s property, the Trump National Golf Club Bedminster, is located. 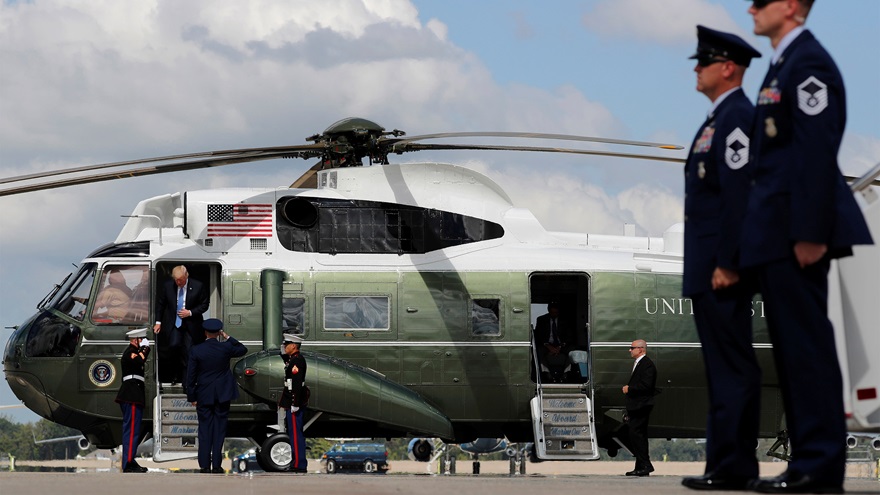 President Donald Trump arrives on the Marine One helicopter to board Air Force One for travel to Indiana from Joint Base Andrews, Maryland, Sept. 27, 2017. Photo by Jonathan Ernst, REUTERS.

Pilots planning to fly in the vicinity, and unmanned aircraft operators, are strongly urged to check notices to airmen frequently and be aware that exact TFR boundaries and effective times can change with little notice.

“Previous TFRs in this region have resulted in numerous airspace violations,” the FAA said in a TFR Alert Bulletin distributed in advance of the holiday-weekend airspace restrictions being posted on the FAA’s TFR website July 2.

According to those notams, between July 5 at 11 a.m. Eastern time and July 7 at 4:30 p.m. Eastern time a TFR with a 10-nautical-mile inner core and a 30-nm outer area will be in effect from the surface to 17,999 feet msl as described in notams for the New York and Washington Air Route Traffic Control Centers.

Pilots should note that all flight operations within the inner core are prohibited except those listed in the notam.

Flights between 10 and 30 nm of the TFR center “are limited to aircraft arriving or departing local airfields, and workload permitting, ATC may authorize transit operations. Aircraft may not loiter. All aircraft must be on an active IFR or a filed VFR flight plan with a discrete code assigned by an air traffic control (ATC) facility. Aircraft must be squawking the discrete code prior to departure and at all times while in the TFR and must remain in two-way radio communications with ATC,” according to the TFR text. Operations not authorized within the TFR include “flight training, practice instrument approaches, aerobatic flight, glider operations, parachute operations, ultralight, hang gliding, balloon operations, agriculture/crop dusting, animal population control flight operations, banner towing operations, sightseeing operations, maintenance test flights, model aircraft operations, model rocketry, unmanned aircraft systems (UAS), and utility and pipeline survey operations.”

Please note that other TFRs of shorter duration and different boundaries have also been posted and will be in effect during the July 5 to 7 period in the area.