Get the app Get the app
Get the latest news on coronavirus impacts on general aviation, including what AOPA is doing to protect GA, event cancellations, advice for pilots to protect themselves, and more. Read More
Already a member? Please login below for an enhanced experience. Not a member? Join today
News & Media Ready for the moment

Neil Armstrong was low on fuel, hand-flying a fragile lunar lander with a porthole view of a forbidding alien landscape. The computer could not be trusted, the radios were wonky, and he made the biggest command decision of his life with the whole world watching. How does any pilot prepare for that moment? One answer applies to all of us: Training.

To understand what Armstrong and his lunar module Eagle co-pilot, Edwin "Buzz" Aldrin, were up against as the lunar module descended on July 20, 1969, toward mankind’s first lunar landing, imagine making an instrument approach to a largely uncharted island in the remote Arctic. You’re low on fuel, and the spot where you first planned to touch down is already miles behind you. Ahead, there are lots of giant, jagged rocks. The GPS you’re relying on for navigation starts spitting out errors and decouples from the autopilot. Maybe there’s some vaccine in the backseat you must deliver to a lonely outpost to save lives, so the price of failure will be high. You have one shot at this landing, and if you miss that, there’s a tricky abort maneuver you can try that will allow you to go find an alternate. As long as you don’t roll over on landing and sink into the snow.

That’s still far short of a perfect analogy to the situation Armstrong faced, since on Earth there is air to breathe, and in most locations on the planet, one can hope for rescue.

An annotated transcript of the Apollo 11 descent (including video, audio recordings, and images) posted by NASA in 1995 offers deep insight into just how dicey this landing was at some points. It did not take long for the painstakingly detailed plan to start going sideways. They realized very soon after initiating the descent that they were not lined up for their intended landing area, and would overshoot it by a considerable distance—about three miles. (The mission planners may have failed to account for the residual air pressure in the tunnel connecting the lunar module to the command module that provided a gentle nudge on separation, though other factors may have contributed to the error.)

Mission Control cleared them to continue the powered descent, but more trouble was coming.

At 33,500 feet above the moon’s surface, 102 hours, 38 minutes, and 42 seconds into the mission, the computer warned the crew that all was not well. The “1202” program alarm, which had never sounded during simulations, indicated the computer was overwhelmed by data. (The Wall Street Journal on July 15 published a fascinating video interview with one of the programmers who wrote the code for the landing guidance computer. He said he would have recommended an immediate abort had he been in Mission Control at the time, and feared the computer, and the spacecraft, might crash.)

The math (Aldrin was constantly cross-checking the navigation guidance) was still looking good, but more computer errors would soon follow. At 3,000 feet above the moon, a “1201” alarm sounded, meaning basically the same thing. Armstrong by now had a clearer view of the terrain ahead, and a visual reference in the form of a landing point designator calculated by the wonky computer. There was a problem: They were headed straight for an area strewn with huge boulders that could damage the lunar module, or tip it over, stranding the astronauts forever on the moon.

… take manual control of the lunar module so we don’t run into a bunch of huge rocks or crash into the large crater dead ahead is a probable approximation of his unfinished thought.

Armstrong adjusted the pitch angle to increase horizontal speed and clear the trouble. He had limited control of the descent rate, so he effectively mashed the throttle to the firewall, increasing the lunar equivalent of airspeed as much as he could to clear the crater ahead, his eyes probably straining to see what was beyond. Armstrong’s heart rate began to increase, passing 130 beats per minute at about this time. 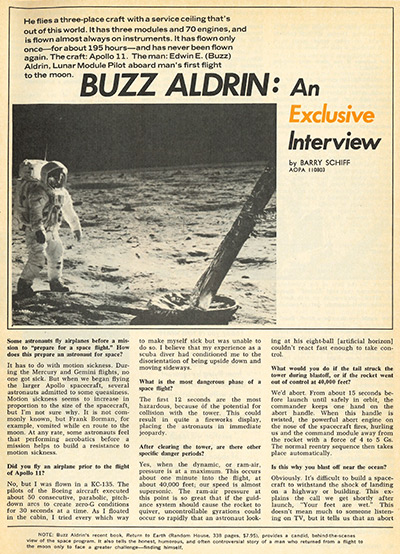 In 1974, Edwin E. “Buzz” Aldrin gave AOPA’s Barry Schiff an exclusive inside look at what it’s like to fly a spacecraft, his skepticism about aliens buzzing Earth, and whether a typical general aviation pilot might make a good astronaut.

At 102:43:42, Aldrin advised the pilot in command that “you’re pegged on horizontal velocity.”

Armstrong had by now begun to ignore the computer’s estimate of landing point in favor of his eyeballs, as he explained later:

“By this time I was flying the machine manually out to the west. That's indicated when Buzz says 'We're pegged on horizontal velocity.' I had tipped it over like a helicopter and was going out to the west.”

Aldrin soon advised Armstrong to begin slowing down, with the lunar surface now just 300 feet below. As Armstrong adjusted the pitch angle to decelerate, his pulse accelerated toward its mission maximum of 150 beats per minute.

“Eight percent,” Aldrin replied, according to the transcript.

The lunar module had two propulsion packages and two fuel tanks. The descent fuel was running very low. There was an option available if they didn’t land very soon: Abort the landing. Armstrong could have decided the risks were too high, and initiated a sequence of events that would have separated the lunar module landing gear and descent package, and fired the booster on the upper stage that was designed to propel them from the surface of the moon back to the orbiting command module where astronaut Michael Collins was waiting.

Time and fuel were rapidly running out. If they didn’t complete the landing within seconds, an abort would be the only way they’d ever make it back to Earth.

“We had gone that far and we wanted to land,” Armstrong would later reflect. “We didn't want to practice aborts. So I'm sure that we were focusing our attention on doing what was required in order to complete the landing."

At 102:45:31, mission control reminded the crew they had 30 seconds left until that “Bingo” fuel call, when they must either be landed on the moon, or initiate the abort, a dangerous and tricky proposition at such low altitude.

“As we got below 30 feet or so, I had selected the final touchdown area,” Armstrong later recalled. “For some reason I'm not sure of, we started to pick up left translational velocity and a backward velocity. That's the thing I certainly didn't want to do, because you don't like to be going backwards, unable to see where you're going. So I arrested this backward rate with some possibly spasmodic control motions, but I was unable to stop the left translational rate. As we approached the ground, I still had a left translational rate which made me reluctant to shut the engine off while I still had that rate. I was also reluctant to slow down my descent rate anymore than it was, or stop (the descent), because we were close to running out of fuel. We were hitting our abort limit.”

Nine seconds later, Aldrin announced “contact light,” meaning at least one of the probes extending from the lunar module’s landing gear had made contact. It was 20:17 UTC on July 20, 1969. Armstrong powered down within four seconds.

At 102:45:58, Armstrong, his heart still racing, told Aldrin that the engine was disarmed, then keyed the mic to speak into history: “Houston, Tranquility Base here. The Eagle has landed.”

They were on the moon, upright, the engines secure and the spacecraft stable, and Armstrong’s heart rate began to ease back down toward 130.

Armstrong, who died in 2012, had accomplished the first and the most challenging lunar landing in human history. Others would follow, but no Apollo commander’s heart rate ever reached 150, and those who would follow knew that the moon’s surface had already proved stable enough for a spaceship that could not afford to topple over.

AOPA Air Safety Institute Executive Director Richard McSpadden, no stranger to aviation challenges himself, said that while that moon landing cannot really be compared to any terrestrial equivalent, all pilots can learn from Armstrong’s feat the value of training and preparation. Most pilots are lucky, and never have to face the kind of challenging decision under incredible pressure that Armstrong had to make once he realized they were off-course, with a guidance computer starting to spit out errors, and a pressing need to adjust the landing point manually, on the fly. But many issues can arise in a general aviation cockpit, and any pilot might one day face a moment of reckoning, when life-and-death decisions must be made.

“The only way to make sure you’re prepared for that is to train for it,” McSpadden said.

There’s really no need to put the nosewheel exactly on the centerline if the runway is 9,000 feet long and 300 feet wide, and you’re flying a piston airplane, but good pilots practice doing that just the same, McSpadden continued. “One day, it may matter. You may need to be able to put that airplane exactly on the mark.”

Armstrong brought the experience of 78 missions flown for the U.S. Navy in Korea, and subsequent service as a test pilot flying the X–15 and other cutting-edge aircraft of the time. He had faced many moments of reckoning before that moment just above the surface of the moon when he had to decide whether to land or abort. He and Aldrin and the other Apollo astronauts had spent many hours in simulators, practicing the maneuvers over and over, and still there were surprises in store when it came time for the real thing.

When that moment came, Armstrong was ready.