Get the app Get the app
Already a member? Please login below for an enhanced experience. Not a member? Join today
News & Media 'Plane Savers' take Oshkosh by storm

Did you hear the story of Plane Savers? 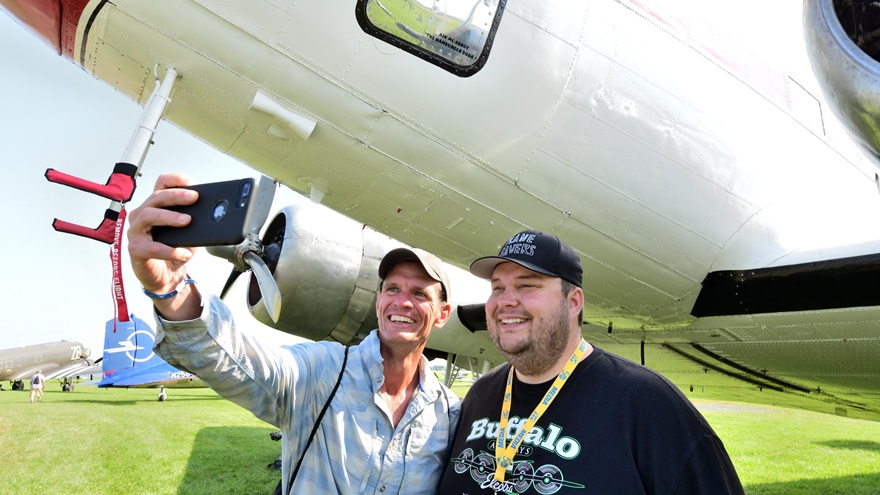 A Plane Savers enthusiast takes a selfie with Mikey McBryan, who conceived the project, at EAA AirVenture 2019. Photo by Mike Collins.

Last December, and sight unseen, Mikey McBryan—the general manager of Buffalo Airways in Canada’s Northwest Territories, who was featured in the popular Ice Pilots NWT reality television series—bought a war veteran DC–3 that had sat, neglected, near Montreal for almost 30 years. C-FDTD was built as a C–47 and dropped Canadian paratroopers on D-Day. His goal was to revive the neglected warbird and fly it on June 6, the seventy-fifth anniversary of D-Day. The project was called Plane Savers, and it succeeded.

The historic DC–3 arrived at EAA AirVenture in Oshkosh, Wisconsin, at noon Tuesday, and was parked on the flight line at the south end of Runway 36—it has since been relocated closer to the midpoint of Runway 18/36, opposite the Vintage Aircraft headquarters and Vintage Barn. McBryan; his girlfriend, Stella Heidorn, who was instrumental in the project; and mechanical wizard “Uncle” Ronny McBryan—as well as “Buffalo” Joe McBryan, owner of Buffalo Airways and pilot in command of the historic aircraft—usually are available at the airplane to answer questions, offer tours, and meet with fans. The airplane is located in Row 54, and the group will be at the show until Saturday morning.

And the response has been overwhelming. “People come out and want to tour the airplane, and have me tell them everything about it. I’ve been doing that for six months!” said Mikey McBryan, who documented the process with 156 YouTube videos, many of which have accrued more than 100,000 views.

And many Plane Savers fans are making the trek to Oshkosh specifically to see the airplane in person, and take selfies with McBryan and the rest of the crew. 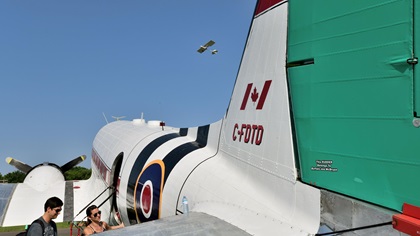 One Japanese fan flew to Oshkosh for one day, just to see the airplane, McBryan said. And an 11-year-old boy from California will remain etched in his mind. “He was just a young guy, and super energetic,” he said. “He’s got everything on Plane Savers memorized, and everything on Ice Pilots.” The young man knew things about Buffalo Airways that many employees do not know, McBryan added. “Most kids are brought here because of their dads—this kid dragged his dad here. That’s hilarious. And that shows the power of social media.”

“I absolutely love your enthusiasm about airplanes,” John Goheen of Oshkosh told McBryan in a conversation beside CF-DTD’s tail. An employee of Basler Turbo Conversions at Wittman Regional Airport, he watched the Plane Savers series regularly. 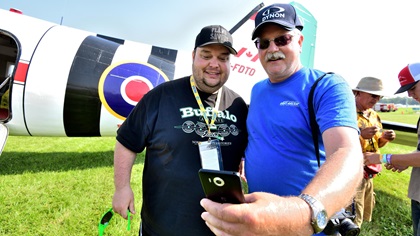 Goheen’s sister, Ashley Haase of Oshkosh—who also works at Basler—accompanied him to the south end of the airport. “We said we weren’t going to stay, but we can’t stay away” from these airplanes, she said.

“It’s hard to fail when you’ve got really good people. It’s the work ethic” that helped the project to succeed—that and the presence of École Nationale d’Aérotechnique, a large regional maintenance training facility that fortuitously was located right next to the DC–3 at Saint-Hubert Airport in Longueuil, Quebec, and provided invaluable assistance to the project.

What’s next? McBryan said that after Oshkosh, the airplane will be flown to Buffalo’s maintenance base at Red Deer in Alberta. And Plane Savers will continue. “I have to do a Season 2 because of all the love we received [with Season 1],” he said. “Tune in to YouTube Aug. 1 for an announcement about Season 2.”

Technical Editor
Mike Collins, AOPA technical editor and director of business development, died from COVID-19 at age 59 on February 25, 2021. He was an integral part of the AOPA Media team for nearly 30 years, and held many key editorial roles at AOPA Pilot, Flight Training, and AOPA Online. He was a gifted writer, editor, photographer, audio storyteller, and videographer, and was an instrument-rated pilot and drone pilot.
Go to Mike Collins's Profile
Topics: EAA AirVenture