Get the app Get the app
Already a member? Please login below for an enhanced experience. Not a member? Join today
News & Media Electric trainer meeting expectations

The all-electric two-seater being tested by Bye Aerospace in Colorado has so far validated expectations, the company reported. 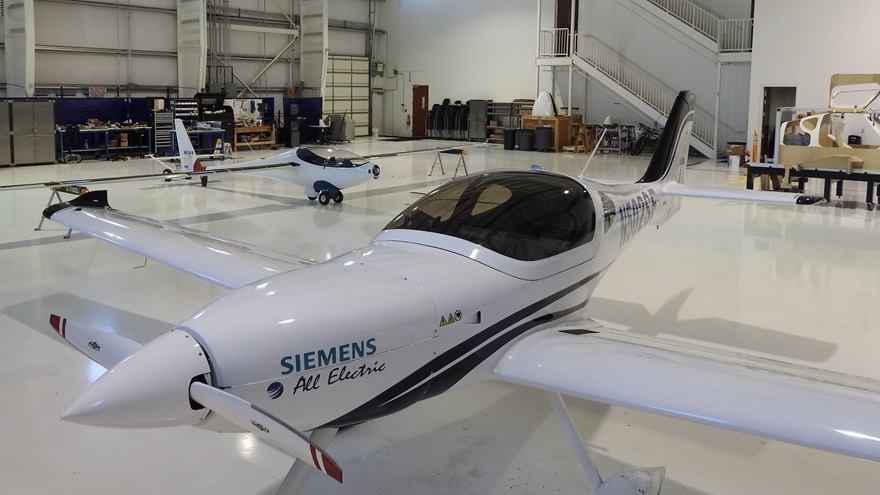 Bye Aerospace has moved into a larger hangar as flight tests of the two-seat eFlyer continue. Photo courtesy of Bye Aerospace.

Now called eFlyer (formerly Sun Flyer 2), the prototype that helped draw investors and customers is approaching the first anniversary of its maiden flight. Company founder and CEO George Bye reported that flight tests of eFlyer, which first flew with a Siemens motor on Feb. 8, have demonstrated energy efficiency that matches or exceeds design estimates at typical traffic pattern speeds during 12 flights since Feb. 8.

“These preliminary findings have validated our expected speed range and endurance for the flight training mission,” Bye said. The eFlyer is estimated to have a three-hour endurance. “We have been very pleased with the outcomes of these tests and will be announcing further outcomes in the coming weeks.”

Bye submitted an application for FAA certification of the aircraft then known as Sun Flyer 2 in May 2018. A sales pitch that includes estimated operating costs of $14 per hour helped secure an order for 30 aircraft from the Aspen Flying Club in August.

An influx of venture capital funding in November helped propel the program, and Bye Aerospace now has more than 30 employees on staff, more than double the workforce of 12 workers who got the eFlyer off the ground a year ago. The company has moved into a larger hangar at Centennial Airport to house the growing operation. Tests of the current eFlyer prototype are expected to wrap up soon, and the company will then upgrade the motor to a final production version. Bye hopes to be the first to certify an all-electric aircraft under Part 23.