Get the app Get the app
Already a member? Please login below for an enhanced experience. Not a member? Join today
News & Media Young Earthrounder: Mason Andrews

Editor's note: This article was updated March 7 to clarify when Mason Andrews earned his private pilot certificate.
Mason Andrews first took the controls of an aircraft in 2013 during a tandem paraglider flight. In 2018, the 18-year-old circumnavigated the Earth solo in his family’s Piper PA–32 Lance. Andrews flew in, or over, 22 countries on the 76-day solo flight to bring awareness for MedCamps of Louisiana, an outreach that provides free summer camps to those who have Down Syndrome; spina bifida; developmental disabilities; or hearing, speech, or visual impairments. The trip raised more than $33,000 for the charity. 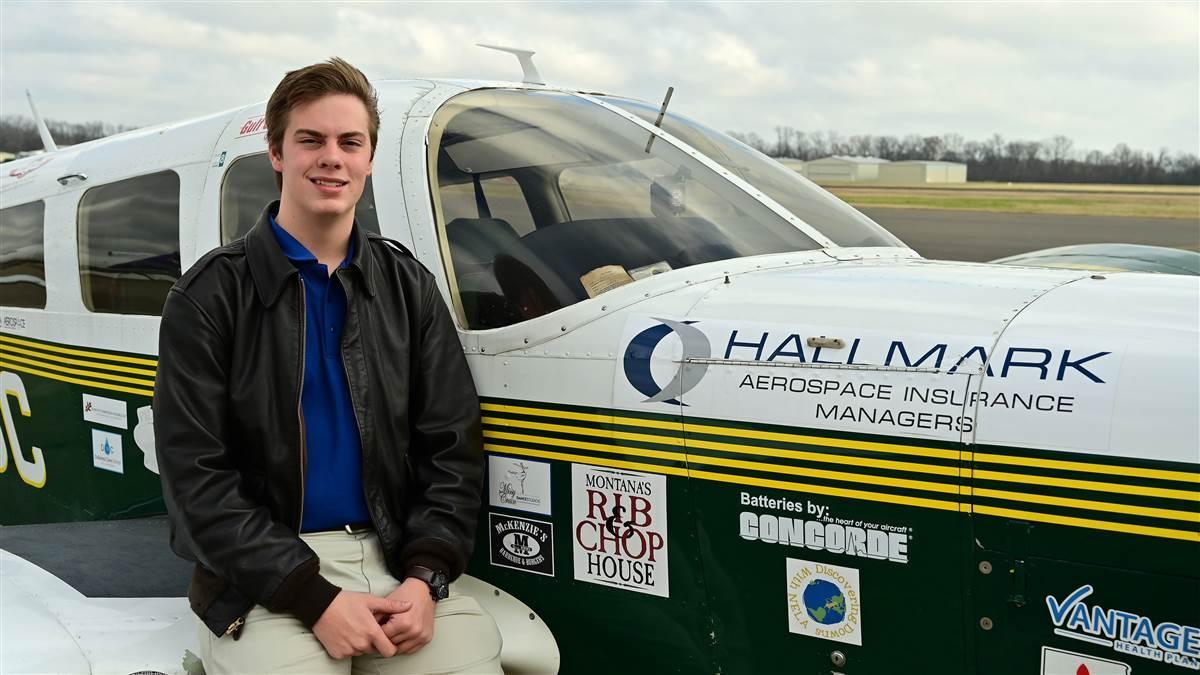 Who: Mason Andrews
Hours | 575
Certificates and ratings | Private pilot, single-engine land; instrument rating
Extra | Andrews’ VHF radios were out of range, his high-frequency radio failed, and relay calls went unanswered as he negotiated a path around significant unforecast thunderstorms between the Philippines and Okinawa, Japan. After he clipped the Republic of China’s airspace near Taiwan, Andrews was intercepted by a Taiwanese F–16 fighter jet. The jet nudged him away from China, and Andrews re-entered Japan’s airspace as soon as he was able. “I became a bit of a national celebrity in Taiwan,” he said. “I was all over the news with about 1.6 million video views about my intercept.”

Andrews earned his private pilot certificate in 2017 and built up about 200 hours in the family’s Lance before attempting the worldwide journey. He named the green-and-white N7278C the Spirit of Louisiane in a nod to Charles Lindbergh’s Spirit of St. Louis.

“I’ve always been inspired by Charles Lindbergh and read most of his books,” said the Louisiana Tech University professional aviation program student and instrument-rated pilot. Like Lindbergh, he landed at Le Bourget Airport in Paris after his Atlantic crossing.

His favorite part of the trip was landing in Paris at night and seeing the Eiffel Tower as he made his final approach. Weather forced him to stay in the Philippines for nearly three weeks, and nearly doubled the projected 40-day journey. He also experienced a nighttime in-flight emergency when severe thunderstorms blocked his route from the South China Sea. Attempting to land at Subic Bay International Airport, it was closed and the lights were off. When he was refused entry, he declared the emergency.

“I wasn’t demanding, but I needed their help and center couldn’t clear me to land. After I landed, the police showed up, and I thought I was getting arrested. They were actually excited to see me and said, ‘We’ve heard about you.’ They shook my hand and then I went on my way.”

Helping fund MedCamps is “something I’m really proud of,” said Andrews. “I thought it was a great thing to tie aviation and the MedCamps program together, and to raise awareness for both. The more people learn about these types of things, the more they will be inspired to do them, just like I was.”