Get the app Get the app
Already a member? Please login below for an enhanced experience. Not a member? Join today
News & Media 'Go for it,' Tuskegee Airman encourages

'Go for it,' Tuskegee Airman encourages

Education and a love for flying can prepare future pilots for “all kinds of opportunities in aviation and aerospace,” said 99-year-old retired U.S. Air Force Col. Charles E. McGee, a National Aviation Hall of Fame inductee and Mustang P–51 pilot. 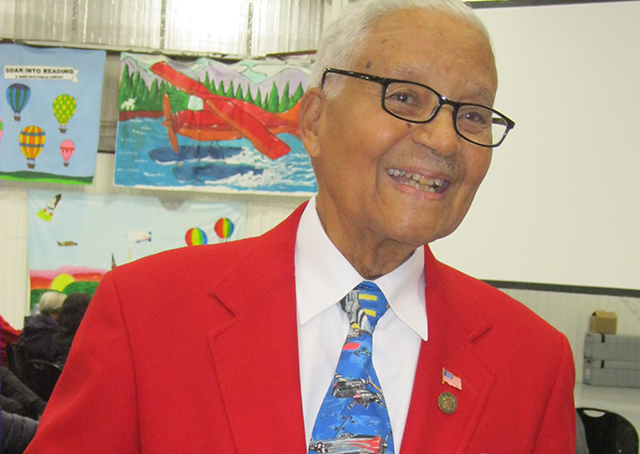 The Congressional Gold Medal-winning Tuskegee Airman began his 30-year military career at the urging of his ROTC instructor during college classes at the University of Illinois. “‘Literally, I was avoiding the draft,’” he confided to AOPA President Mark Baker during a recent interview.

The veteran of 409 fighter combat missions and three wars was a student when World War II began. His military instructor advised McGee to enter the aviation maintenance program because the Army needed aircraft maintenance technicians. At that time the U.S. Army “said they couldn’t use any black pilots because they didn’t have any black mechanics,” McGee explained, so "the first Tuskegee Airmen were the mechanics.”

After the program was born “the Army Air Corps expected them to fail but they didn’t,” he added. The service soon built Tuskegee Army Airfield in Alabama near the existing Maxwell Army Airfield, which “needed mechanics but wouldn’t use them because they were black,” he added. McGee said when he and other members of the group were confronted by the deep South’s segregation and derogatory comments, they worked even harder to succeed.

McGee saw combat in northern Africa flying a Curtiss P–40 Warhawk as part of the pioneering all-black 332nd Fighter Group, 12th Air Force, in Sicily and Naples, Italy. He said the pilots picked up their “Red Tails” nickname from the red tail feathers of their Republic P–47 Thunderbolts and North American P–51 Mustangs flown for the 15th Air Force during fighter missions and long-range bomber escorts.

The Tuskegee Airmen developed a reputation for solid backup. During the interview, McGee recalled a dogfight with a German pilot who “thought he could outrun the P–51—but it didn’t happen.”

When he rotated stateside the “old fighter pilot” said he soon became a “twin-engine B–25 tricycle gear pilot,” an aircraft that he complimented for its “excellent power.” McGee went on to serve in the Korean War because he “knew the P–51 Mustang so well” and the aircraft was in use at an U.S. air base in Japan. He later transitioned to a Lockheed F–80 Shooting Star fighter and a Northrop F–89 Scorpion, his Aviation Hall of Fame biography noted. He then flew a reconnaissance version of the McDonnell Douglas F–4 Phantom in Vietnam, one of “about 27 different aircraft” that McGee piloted. He said he "loved every minute of it.”

McGee, who has been a proponent of education and aviation his entire life, complimented AOPA’s You Can Fly High School initiative. “What you are doing for the young folks of the country is needed,” he told Baker. He added that there were aviation and aerospace careers that could define the future. “We still don’t have a spaceplane that will go from New York City to Tokyo in 2.5 hours,” he pointed out, adding that there were additional possibilities to develop new airframe materials and advanced fuels.

His advice for career-minded youth was to study what he called “The Four Ps: perceive, prepare, perform, persevere,” and then be ready to “go for it.”

He explained that to perceive meant to “dream your dreams. Hopefully as you discover your talents, you will pinpoint something you like.” He said it was also important to “prepare yourself with a good education. Learn to read, write, and speak well, and develop those talents.” Next, be ready to “perform. Let excellence be your goal in everything you do, always doing your best. Nobody can ask more from you if you are doing your best, but they can” if you are not giving 100 percent.

The final P was to “persevere. We could’ve gone off [at Tuskegee Airfield] and bowed our heads when they called us names and said they didn’t like us, and [then] not serve our country. Don’t let a circumstance like that be an excuse for not achieving” your goals, he counseled.

“After my first ride, I knew I made the right decision,” he recalled. “I enjoyed being in the air, doing a loop and a roll, and then putting my feet back on the ground. There’s nothing better.”