Editor's note: This article was updated May 11 with additional information.

Where else but a combination fly-in and birthday party can you go to make new friends, learn what it’s like to pilot a flying piece of history, see parachutists reenact a wartime jump, observe a short-takeoff-and-landing contest, and feast on far-flung fare from pancakes and pizza to pupusas?

For many people who came to Frederick, Maryland, on May 10 and 11, the answer was the AOPA Fly-In at Frederick Municipal Airport. The event was staged to celebrate AOPA’s eightieth anniversary, doubling as the staging point for an event in the national observance of the seventy-fifth anniversary of the June 6, 1944, D-Day invasion of Normandy during World War II.

A cool breeze and a high overcast on May 11 made for fine flying conditions for some showy aviation action that brought the fly-in to its climax and turned the tables on May 10’s conditions, when a squally cold front moved through the area much of the day, dousing some of the flight program and grounding a night drone demonstration.

With Paul Harrop of the AOPA Live crew and former Alaska bush pilot Mike Vivion calling the action, the short-takeoff-and-landing demonstration featuring a variety of tailwheel single-engine airplanes and a twin-engine pusher-prop AirCam (not a flying canoe, as some speculated) wowed the crowd with terse takeoffs and truncated touchdowns.

Also well worth the wait were the sight and sound of five Douglas DC–3 and Douglas C–47 airplanes of the D-Day Squadron as they flew multiple formation passes over the airport just at lunchtime before releasing 14 parachutists of the Liberty Jump Team from two of the aircraft—a great entertainment for the crowds standing in line at the food trucks or strolling the ramp to inspect dozens of aircraft on display. You know how they look, and you know that deep rumbling sound—but what is it like to fly a C–47 like the ones that delivered invasion paratroopers to the shores of occupied France?

“It flies like it looks,” said Garrett Fleishman, a pilot of the Tunison Foundation’s C–47, Placid Lassie. “You feel everything. The controls are heavy, the engines are loud—that specific noise they make.”

In June the airplanes that visited Frederick for the fly-in will join other DC–3s and C–47s that will fly to Europe in June to take part in Daks Over Normandy, an event that will fill the skies with “Dakotas” to commemorate the D-Day invasion and honor those who sacrificed so much to liberate Europe.

Take care of ‘my’ airplane

Pilots and nonpilots alike swarmed the AOPA Super Cub Sweepstakes airplane, resplendent on its amphibious floats. They peppered AOPA staff members with questions or simply urged us to “Take good care of my airplane,” as they walked past. The sweeps winner will be selected on June 18. 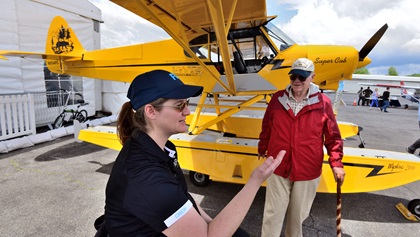 Just one tent over from the Super Cub, AOPA Media Production Specialist Sylvia Horne was being especially productive inviting passersby to pose for a picture that with a little bit of software magic would place the person being photographed on a virtual AOPA Pilot magazine cover.

Airplane ramp appeal was everywhere: A hulking Quest Kodiak 100 single-engine turboprop proved a popular visit and a prized cockpit for kids to sit in. Single-engine models and a sleek P2006 twin from Italy’s Tecnam drew interest. Many likely also had their first close-up look at a Cirrus Vision single-engine light jet, and the new PC–24 twinjet from Pilatus.

Showgoers who attended the May 11 Pilot Town Meeting in AOPA’s National Aviation Community Center were treated to AOPA President Mark Baker hosting a roundtable with his two immediate past predecessors, Craig Fuller and Phil Boyer, who reflected on AOPA’s major accomplishments during their tenures and shared their visions of general aviation’s future.

Boyer steered the association for 18 years, including a time when light aircraft manufacturing had almost ground to a halt because of product liability exposure. Reform legislation driven by AOPA advocacy turned the industry around, “so that was a hard-won fight,” he said. He was at AOPA’s helm when GA faced challenges of the post-Sept.11, 2001, period, seeking solutions guided by a policy of “working with our hand out and open.” 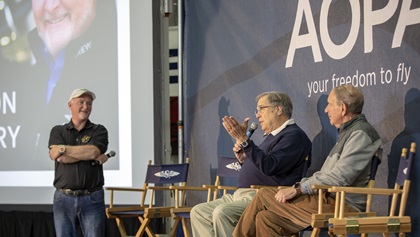 Fuller, Boyer's successor from 2009 to 2013, also noted strides AOPA took in the public sector including launching the GA Caucus—a vehicle for members of Congress to express their support for aviation initiatives—and rebuff his era’s effort to impose user fees on pilots. Fuller credited AOPA members’ readiness to speak out on national and local issues with adding to AOPA’s legislative clout. “It is that effort time and time again that has made the difference,” he said.

Baker turned the discussion to AOPA’s future, noting that GA in the United States is “the envy of the world.”

Boyer confided his enthusiasm for the potential of GA technology, including the development of electric aircraft. Fuller concurred, noting that success conquering the hurdles faced by electric propulsion—essentially the capacity of the batteries that would power such aircraft—would bring down fuel-related flying costs and offer “a viable business model for flight schools.”

Programs to bolster the GA pilot population, long a shrinking demographic, are a priority front for AOPA, and they are making a difference, said Senior Vice President of Media, Communications, and Outreach Tom Haines, reporting an 18-percent increase in student pilot starts in 2018.

Elizabeth Tennyson, AOPA vice president for aviation program operations, added that AOPA’s Rusty Pilots program, a component of You Can Fly, AOPA’s initiative to get pilots flying and keep them flying, has now helped 6,500 pilots become active again since the program launched in 2014.

That number looks likely to grow: As the Town Hall session was underway, in another venue on the airport, an estimated 50 individuals were attending an AOPA Rusty Pilots seminar hosted by Chris Moser, AOPA’s director of flight training initiatives. For many who attended, his lively session promises to be the first stop on the road to becoming rust-free—in a few cases, after an absence from the cockpit for 25, 30, or even 40 years, based on a show of hands.

They are likely encouraged by Moser’s description of his own reaction to returning to flying after a long absence.

Dan Namowitz has been writing for AOPA in a variety of capacities since 1991. He has been a flight instructor since 1990 and is a 35-year AOPA member.
Go to Dan Namowitz's Profile
Topics: AOPA, You Can Fly, Events