Get the app Get the app
Get the latest news on coronavirus impacts on general aviation, including what AOPA is doing to protect GA, event cancellations, advice for pilots to protect themselves, and more. Read More
Already a member? Please login below for an enhanced experience. Not a member? Join today
News & Videos Return to home(stead)

A Canadian aerial photography company has grown from barnstorming roots into a thoroughly modern firm, using manned and unmanned aircraft to add fresh images to a massive archive that connects families to bygone generations and long-forgotten homesteads. 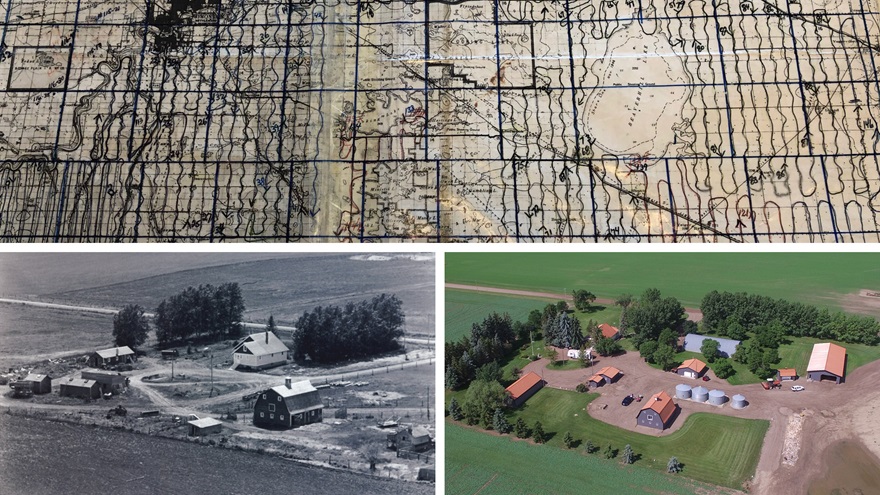 Then and now: A Canadian homestead first photographed in 1955 is seen today in living color. The topographical map of the Edmonton area shows the mile-wide paths flown, along with the locations of each roll of film that was changed in flight. Each dark-outlined square was 6 miles by 6 miles. Early black-and-white photos could be sent to the photo service’s headquarters in Edmonton and hand-colored. Errors in the back-and-forth communication with farm owners led to the company joke: “We’re the only company that can provide you with a red John-Deere tractor.” Photos courtesy of Homestead Aerial Farm Photos.

If a picture is still worth a thousand words (ignoring inflation), Calgary, Alberta-based Homestead Aerial Photos' 1.5 million print archive is worth over a billion and a half of them, enough to make War and Peace look like a brochure by comparison. Kim Bessette and his wife Eileen run an aerial photography business that dates to the 1950s and has stood the test of time (and several name changes). Camera platforms have evolved from single-engine aircraft like Piper Super Cubs to helium-filled blimps and now drones. Today, Homestead is leveraging its prodigious inherited archive, more than 1.5 million images, to market prints old and new in the agricultural provinces of the Canadian prairie: Alberta, Saskatchewan, and Manitoba.

This well-tracked territory was painstakingly grid-flown by the original owner of the company, who sold images door-to-door. Today, the couple hits the road and sets up shop at conventions, fairs, or malls in town after town. They bring with them historic proofs of that region photographed on spec from 1953 until around 2001. Property owners, and often their children or even grandchildren, are amazed to find views of the family farm they might never have seen before.

Many of these farms are now void of structures; barns, silos, and cabins long since razed to maximize arable acreage. Homestead’s images are sometimes the only link that remains to an old family farm. Bessette recalls hurrying one order along for children wanting to present the print to parents in hospice before they passed. Customers order copies of them and sometimes commission a current view. Enter the trusty DJI Inspire 1, a modern tool, albeit a little long in the tooth by drone standards.

In today’s world of GPS-guided drones that instantly capture high-resolution images, hearing Bessette speak of the early high-wing photo missions humbles a modern aviator. As Bessette describes the low-level barnstorming flights that at times involved just one man flying, navigating, shooting a 35mm black-and-white film camera, and taking notes, you can almost hear the worn parental lecture, “I used to walk 10 miles to school in the snow...”

Bessette is beginning his fourth summer of flying the Inspire and loves how it handles low-level missions safely. When he needs a full-scale aircraft for its speed and coverage capabilities, he subcontracts it.

Nascent single-pilot operations of 1953 evolved to a crew of two, pilot and photographer. A good thing, given how low aircraft would fly over some farms and towns. Bessette describes one archived photo of a low pass made down a small town street: “He’s flying up and down the main street and everybody is standing outside watching him. Looks like he’s not more than 200-300 feet.”

Gone are those days.

Today, 90 percent of Homestead’s business is marketing the archive and shooting matching views. Bessette says they have all the negatives for the print treasure trove, and he hopes to digitize the entire collection so that when he is gone, the massive body of work will live on.

Transport Canada and FAA drone regulations are similar, but different. They are also evolving. As of June 1, 2019, some operations in Canada will require an actual flight skills test in person with an examiner in order to fly over or near people and in controlled airspace. Bessette’s Inspire 1 is not certified by DJI to fly certain advanced missions, leaving him pondering whether an upgrade is in order. Most of his bread-and-butter farmland work is in uncontrolled airspace.

Before drones became so widely available, Bessette operated a tethered blimp as one low-level platform alternative, walking (it gets tiring he says) the envelope filled with 270 cubic feet of helium around job sites, rotating the camera beneath it while the blimp swayed in the wind. Though such missions typically weren’t very high, Bessette recalls using nearly 800 feet of tether. “Trying to roll that tether up was a nightmare, so we would just use it once and throw it away.”

Aggressive hawks were just as much a threat to that blimp as they can be to drones. They once attacked his miniature airship over a concert fairground job.

“I got taken out twice by two Swainson’s hawks that tore about 30 holes in it,” Bessette recalled ruefully. Luckily, the helium escaped slowly enough to make a gentle descent, not the rough, brick-like tumble of a dead drone. Even though the blimp is now retired and the Inspire does most of the work, Bessette says a key role for his visual observer is to scan the sky for hawks. As numerous YouTube videos attest, drones don’t fare much better than blimps do when leg wrestling with raptors guarding their territory.

If you have roots that might be stirring in the Homestead archive, a search form is available online that will help launch the hunt for memories.