Get the app Get the app
Get the latest news on coronavirus impacts on general aviation, including what AOPA is doing to protect GA, event cancellations, advice for pilots to protect themselves, and more. Read More
Already a member? Please login below for an enhanced experience. Not a member? Join today
News & Videos Gemstone hunting in Maine

Each year when summer arrives in Maine, enthusiastic parties of rock hunters head into the field to search for gemstones and other geological rarities in the state’s world-famous mineral collecting localities. 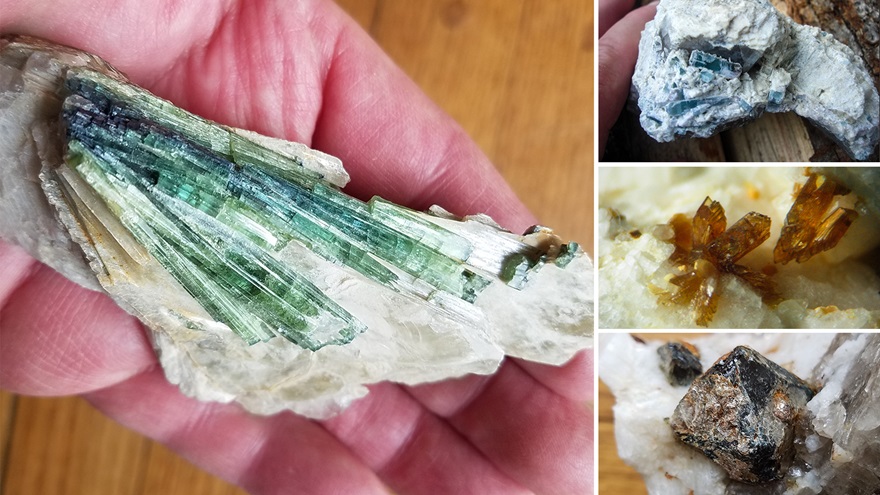 Year after year, the specimen seekers show up on schedule toting shovels, screens, or sledgehammers and sharing stories of fabulous finds or strenuous searches of past years.

They are a sociable bunch who wait impatiently through the off-season to travel from near or far for a few days or weeks of digging, hammering, or sifting in the quarries or the rock dumps for prize pieces. I fell in with this band of happy explorers two decades ago, much the way I first became involved in aviation: It was always something I wanted to do, but I hadn’t connected with opportunities to do it. A chance meeting changed that and opened a chapter that continues into the present.

If you’ve read this far, it’s time to introduce you to a word intimately associated with rockhounding in Maine: pegmatite. A pegmatite outcrop or a pegmatite exposed by prospecting or mining can be the source of some of the most eye-catching gemstones and other rare specimens in the mineralogical world. That’s especially true of granite pegmatites, the kind found in Oxford and Androscoggin counties and a few other locations in Maine.

I describe pegmatites rather unscientifically as a through-the-looking-glass geological environment where common minerals can form perfect or giant crystals, and where minerals unknown in other geological settings have developed. Go to a rock show or visit a major natural history museum anywhere, and you are likely to encounter specimens from the Maine “pegs.” Or you could get yourself to Maine and start a collection of your own. Like pilots, mineral collectors love to share their activity and their know-how.

There are many ways to go rockhounding in Maine, but the crowd I run with makes its home base at a unique camp for mineral collectors built by a self-taught Maine mining man who had a dream of creating a place where others could come to enjoy and learn about mineral collecting.

Irving “Dudy” Groves and his wife, Mary, built Poland Mining Camps, in Poland, Maine, pretty much by hand several decades ago. With its rustic guest cabins and large dining hall that doubles as a museum of local minerals, Poland Mining Camps is the closest thing I’ve found to a place that reproduces the three happy summers I spent at camp as a youngster. 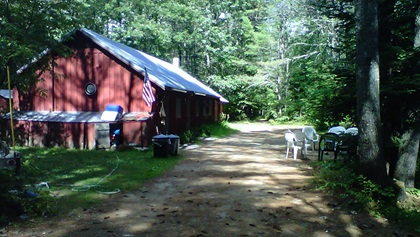 Dudy (pronounced Duddy) Groves died in 2005, but Mary Groves and a committed corps of volunteers are keeping his dream alive. Many customers have been making the summer trek for ages and have developed enduring friendships. Newcomers are always joining in—and it only takes a return trip to be pronounced a regular.

Mary Groves arranges each day’s field trip in advance to a selected quarry where collectible, even world-class specimens of tourmaline, beryl, quartz, fluorapatite, spodumene, garnet, and other minerals are sought. She arises early, rides down to the dining hall in a golf cart, puts the coffee pot on, and makes everyone’s breakfast to order. After breakfast, the caravan of cars, trucks and SUVs heads off for the day’s mining trip, and Mary turns her attention to camp operations and preparing one of her memorable suppers. (Hint: Summer Saturdays are usually lobster night.)

A disclosure: On some outings to the pegmatite quarries, the driver of the caravan’s lead vehicle is… me.

I started showing up at “camp,” as the regulars know Poland Mining Camps, 20 years ago as a rookie mineral collector who didn’t know a garnet from a gahnite or an elbaite from an albite. My interest grew—spurred on by some beginner’s luck in the rock piles—and I benefited from living near enough to camp to make frequent visits. It wasn’t long before the Groves’ “adopted” me. I was thrilled when they entrusted me with the job of leading some field trips, giving me a chance to share my modest but growing mineralogical knowledge with the newbies in the mining parties that usually number from a handful to 15 or 20 people.

How much will you find? Maybe a lot, maybe nothing. But you will have a good time.

Some of the Maine pegmatites are classified as complex pegmatites—that is they contain more than just the basic quartz, mica, and feldspar elements of pegmatitic granite—and those are famous for tourmaline, a mineral that occurs as green, pink, blue or multicolored “prismatic” crystals. Gem-quality specimens are found now and then, but even an opaque tourmaline crystal embedded in transparent quartz, or in a fine-grained lavender pegmatite mica called lepidolite, will look great on your coffee table. Tourmaline is Maine’s state mineral.

Other pegmatite minerals that may produce gem-grade material or great specimens include beryl (aquamarine, morganite, and heliodor are forms of beryl); topaz; spodumene; and apatite, to name a few. Pegmatites are also source rock for rare minerals (for example eosphorite, phenakite, hydroxyl-herderite) and “micromount” specimens. “Micros” are a great way to participate if you live in a tiny city apartment but can’t resist collecting rocks.

Local folklore rocks (sorry) with stories about the mines and some of the larger-than-life mining personalities who are actually very down-to-earth people up close, like Maine mining legend Frank Perham. Perham is the storyteller extraordinaire—and yes, the mineral perhamite is named in his honor.  Several of the miners often join the mining-camp crowd for supper and may show their latest discoveries.

For collectors who want to go home with a prepared souvenir, Creaser Jewelers in South Paris, Maine, is a must-stop destination of the Maine mining scene, specializing in jewelry made from locally mined gems.

I tend to get a little lost in my rock stories, so let’s refocus on the question you probably need answered: How does a general aviation pilot get to Maine pegmatite country?

A convenient destination is Auburn/Lewiston Municipal Airport, right on the edge of the collecting zone and about 10 miles from the mining camp, with precision and RNAV instrument approaches. Portland International Jetport, a Class C airspace airport with major airline service, is about an hour’s drive from the mining district.

Light aircraft aren’t any better than the airlines for hauling home your rocks and mining tools. Veteran visitors use U.S. Postal Service one-rate boxes to put their treasures in transit.

Poland Mining Camps (207-998-2350) is open by reservation for cabin-style lodging from early June through Labor Day in 2019. It’s also possible to arrange to tag along on a day trip if you only expect to be in the area for a short time. I recommend giving Mary Groves a call rather than sending an email. She’d be the first one to tell that she’s not much of a computer user—if she even has one in the house these days.

Other outdoor recreational opportunities abound in the area including camping, hiking, and biking. The Poland Spring Resort is nearby, and the Maine coast and classic vacation stops such as L.L. Bean in Freeport are within convenient travel distance from the mining district.

Here’s hoping you have fun and find something nice. Maybe I’ll see you at breakfast. 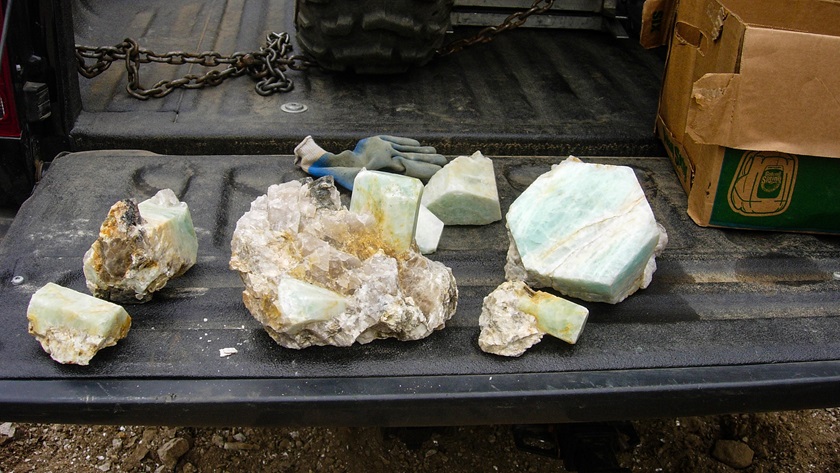