Get the app Get the app
Already a member? Please login below for an enhanced experience. Not a member? Join today
News & Media Drone deconfliction advances

ADS-B In for UAS benefits all airspace users

Editor's note: This article was updated May 23 to reflect new information from the FAA about the timing of expected rulemaking.

The world-leading maker of small drones will equip its aircraft with Automatic Dependent Surveillance-Broadcast In capability for traffic awareness starting in 2020, DJI announced May 22, while federal officials published an updated regulatory timeline indicating that the FAA will make haste to require remote identification technology to enhance situational awareness for all airspace users. 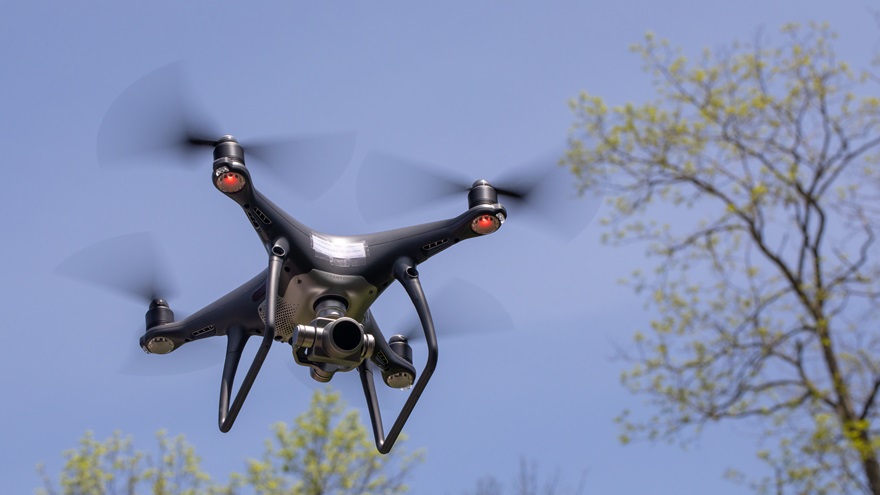 An AOPA-owned DJI Phantom 4 Pro sports an FAA registration in compliance with current requirements; broadcasting an electronic version of this drone registration will soon be required. Jim Moore photo.

The Chinese firm that dominates the consumer and professional market for drones weighing less than 55 pounds will soon implement AirSense, part of a multi-pronged approach to enhance situational awareness. Beginning in January 2020, all DJI drones weighing more than 250 grams (.55 pounds) will display ADS-B Out-equipped manned aircraft position information to the drone pilot, leveraging ADS-B In data to allow remote pilots to detect and avoid all aircraft broadcasting their position and other information via ADS-B Out.

The announcement coincided with publication of a revised rulemaking agenda indicating the FAA expects to have a proposed rule published by September that will require unmanned aircraft to broadcast identification and position information by yet-to-be-determined means. That rule will enable enhanced, mutual awareness for all airspace users, a development welcomed by AOPA and other advocates, including those urging federal regulators to allow advanced drone operations.

AOPA urged the FAA to maximize freedom to fly for all airspace users in formal comments regarding recent rulemaking initiatives that would facilitate advanced drone operations. In those same comments, the association also urged the FAA to bear in mind that many aircraft will operate without broadcasting their position via ADS-B Out for decades to come, and that technological solutions to prevent conflicts and collisions must account for that fact.

AOPA also worked directly with DJI to develop recent advances on “geofencing,” GPS-based technology that prevents drones from flying in areas where the risk of collision is high. DJI previously implemented an updated version of that technology that refines restriction zones around airports to reflect the areas where manned aircraft are most likely to fly, while allowing drone operations in other areas near airports where a conflict is least likely. The bow-tie shapes currently implemented protect runway approaches, but are less restrictive in other areas.

Enabling ADS-B In for drone pilots is another step toward enhanced awareness for unmanned aircraft system (UAS) operators, AOPA noted.

"Expanding the availability of AirSense to DJI pilots is a meaningful step forward in safely integrating UAS and reducing conflicts with manned aircraft. ADS-B In is used daily by thousands of pilots to increase their situational awareness and ensure safe operations. As the general aviation fleet further equips with this NextGen technology, technologies like AirSense will allow all pilots to maximize their investment. All of aviation will benefit from the incorporation of this technology into DJI's large fleet," said Rune Duke, AOPA senior director of airspace, air traffic, and aviation security.

DJI published a video detailing the AirSense technology, along with a white paper detailing the company’s 10-point plan to enhance safety, of which AirSense implementation is a part. DJI also plans to create an internal safety standards group; called on the industry to develop standards for incident reporting; called for geofencing to be implemented across the industry; and called for universal implementation of remote identification of unmanned aircraft.

“DJI leads the drone industry in developing safety technology and education, and we continue that tradition today by setting higher expectations for ourselves, our competitors and regulators,” said DJI Vice President for Policy and Legal Affairs Brendan Schulman, in a May 22 news release. “DJI was the first company to offer geofencing, automatic altitude limits, return-to-home technology and other safety features to the world’s growing community of personal and professional drone pilots. We believe our efforts have helped drones attain their enviable safety record, and we expect our new agenda will further improve safety even as more drones take to the skies.”

The National Agricultural Aviation Association joined AOPA in praising the latest moves by DJI, noting that more than 3,500 agricultural pilots work daily to serve farmers with application missions that involve flying as low as 10 feet agl.

“Studies show that small drones are nearly impossible for our pilots to see, let alone track. An ideal drone system for manned ag pilots is one that has an ADS-B tracking system that can sense and avoid agricultural and other manned aircraft,” said NAAA Executive Director Andrew Moore, in a news release. “DJI has taken the first step towards this by now equipping all of their drones with ADS-B tracking so their drone operators will be aware of other aircraft equipped with ADS-B tracking technology. They deserve real credit for this safety initiative.”

AOPA joined the U.S. Chamber of Commerce and 31 other organizations that urged federal regulators to implement remote identification of unmanned aircraft as soon as possible in a May 16 letter.

“Given that the FAA projects the number of commercial and recreational UAS to more than double by 2022, it is imperative that we have a federal regulatory framework to detect and identify UAS,” the advocacy groups noted. “In addition to addressing the safety and security risks, remote identification will unlock the benefits of advanced UAS operations that will allow for the United States to lead in developing innovative UAS applications such as delivery, surveying, filmmaking, and search and rescue.”

DJI sells as many as eight of every 10 small drones worldwide, and Duke noted that ADS-B In implementation will not only enhance situational awareness from a remote pilot’s perspective, it also represents another incentive for manned operators to equip with the technology. ADS-B Out will be mandatory as of Jan. 1, 2020, for all aircraft operating where a Mode C transponder is currently required. That leaves a huge swath of airspace outside of the ADS-B Out mandate, but drone avoidance is another significant benefit that AOPA hopes all pilots will consider when making equipage decisions.