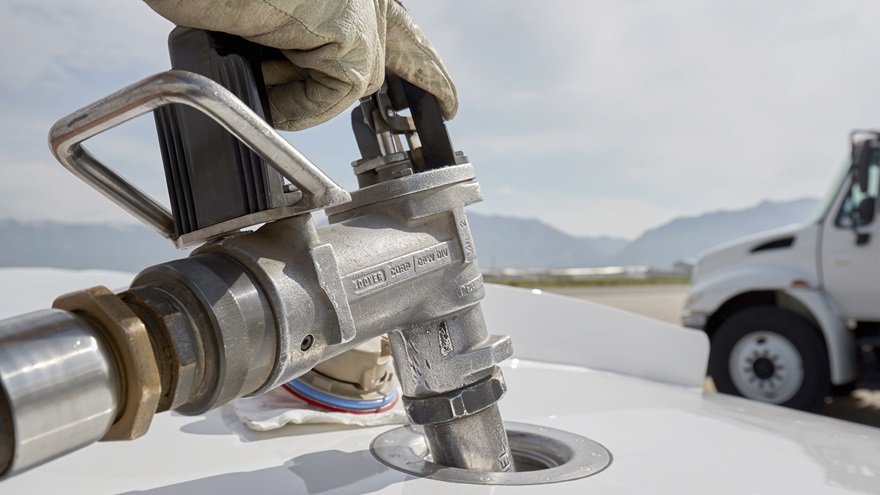 A very light jet being refueled. Photo by Mike Fizer.

There were no injuries in the May 9 incidents that resembled occurrences in 2018 and 2017 which triggered FAA warnings and prompted intensive industry review of aircraft-fueling practices and personnel training, with recommendations to be published soon.

According to the FAA, the two Cessna Citation 550 twinjets received fuel at Punta Gorda Airport that had been contaminated with diesel exhaust fluid, or DEF, which was added erroneously to the fuel supply carried by a fuel truck. DEF is a urea-based chemical that is used to reduce diesel-engine emissions under a federal environmental mandate.

DEF is not intended for use in aircraft, and when added to jet fuel, can trigger reactions including the formation of crystals that can plug fuel filters and damage other engine components. AOPA strongly urges aircraft operators to become knowledgeable about the DEF fuel-contamination risk, and to promptly report any suspected contamination to their FAA flight standards inspector or local FAA office.

The two jets, both owned by Punta Gorda, Florida-based charter operator Air Trek, flew as air ambulances to Naples to pick up passengers. One aircraft departed for Niagara Falls, New York, but experienced an engine flameout north of Savannah, Georgia. It then lost its second engine but landed safely in Savannah. The other Citation departed for Chicago, experienced an engine failure, and landed safely in Louisville, Kentucky, according to the FAA, which confirmed May 23 that it had previously provided organizations including AOPA with incorrect information about the flight routes of the two aircraft.

Air Trek is "extremely proud of the extraordinary professionalism of our pilots and medical team. Air Trek’s pilots are heroes of the day," the company said in a statement provided to AOPA. “Air Trek’s focus on comprehensive rigorous training, both in aircraft and simulators, contributed to a positive outcome,” said Wayne A. Carr, Air Trek's chief pilot.

In August 2018, five aircraft were found to have been serviced with jet fuel containing DEF in Opa Locka, Florida. Nine more aircraft received fuel with equipment that had been exposed to DEF. A chartered Falcon 900 jet was forced to divert after receiving contaminated fuel.

The FAA has discussed the problem, especially addressing the question of how to determine an aircraft’s status after exposure to DEF-contaminated fuel or equipment, in special airworthiness information bulletins issued in December 2017  and September 2018, and a Safety Alert for Operators publication issued in November 2018. The FAA’s Office of Airport Safety and Standards also sent a letter about DEF to airport sponsors.

Oord said the industry groups’ joint report is being finalized and will be released soon.

“These new events will increase the urgency to implement effective corrective and mitigating actions to prevent another future event,” he added.