Get the app Get the app
Get the latest news on coronavirus impacts on general aviation, including what AOPA is doing to protect GA, event cancellations, advice for pilots to protect themselves, and more. Read More
Already a member? Please login below for an enhanced experience. Not a member? Join today
News & Videos Alternative fuels, new jets highlight bizav event in Geneva

The General Aviation Manufacturers Association (GAMA) said that 21 aircraft using alternative fuels arrived at Geneva International Airport in Switzerland for the May 21 to 23 European Business Aviation Convention and Exhibition (EBACE). 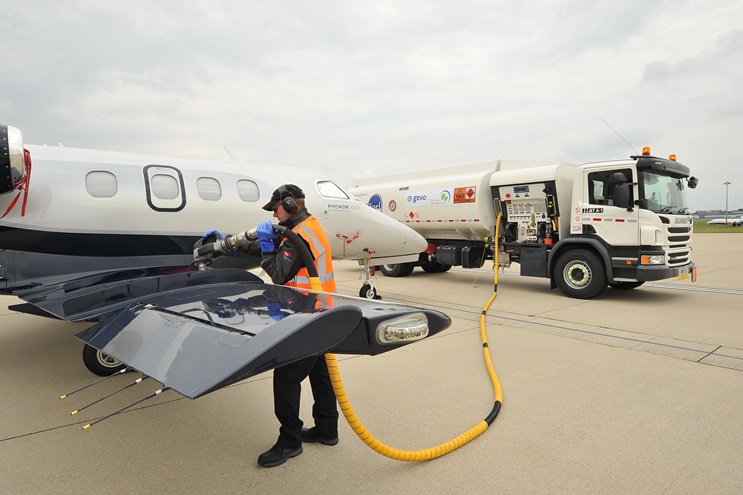 An Embraer Phenom 100 EV is fueled with sustainable alternative jet fuel (SAJF) at Farnborough Airport in the United Kingdom. Photo courtesy of Embraer Executive Jets.
European Business Aviation Association Chairman of the Board of Governors Juergen Wiese called the flights “a milestone in business aviation’s commitment to sustainability and reducing carbon emissions.”

GAMA reaffirmed that a worldwide coalition of business aviation organizations supports the sustainable alternative jet fuel initiative. The association said that the movement has “gained global momentum” toward a journey to a “lower carbon future” since the initiative began in 2018.

The group pointed out that sustainable and renewable jet fuel products were made available at several airports in the United States, England, France, and Sweden to allow jets to fuel up on the lower-emission option for the EBACE journey. 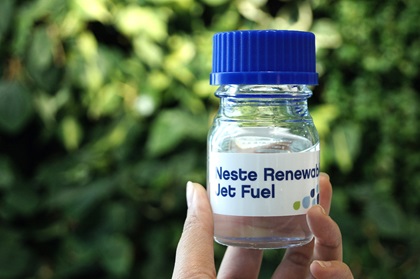 Proponents pointed out that the fuel is safe and doesn’t impact aircraft performance, offers benefits to airports and surrounding communities, and reflects business aviation’s commitment to reduce the carbon footprint.

However, one hindrance that has yet to be overcome is the price premium for switching to sustainable fuels, which may cost three times (or more) per gallon than conventional jet fuel.

Despite the price premium, a 2018 study by the Missouri University of Science and Technology pointed to several benefits of the renewable fuel technology. The analysis concluded that when alternative fuel products were blended with conventional fuel they would “significantly reduce sulfur dioxide” and other particulates, “generally reduce carbon monoxide and unburnt hydrocarbon emissions,” and “minimally reduce or have no effect on nitrogen oxide emissions.”

Members of the business aviation community’s commitment to climate change pledged a two-percent improvement in fuel efficiency from 2010 through 2020, “carbon-neutral growth” from 2020 onward, and “a 50 percent reduction in carbon emissions by 2050,” based on 2005 numbers, GAMA said.

The alternative fuel can be produced from renewable resources including feedstocks, crop residues, woody plants, purpose-grown grass, and other agricultural crops.

The Praetor 600 and its midsize model 500 sister ship debuted during the 2018 National Business Aviation Association Convention and Exhibition in October. Embraer Executive Jets President and CEO Michael Amalfitano lavished the fly-by-wire Praetor 600 with superlatives, calling it “the most disruptive and technologically advanced super-midsize business jet” in its segment. 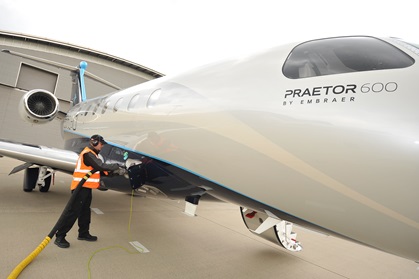 The company said the 600 was “the best performing super-midsize jet ever developed” and surpassed all of its design goals. The flat-floor cabin aircraft has a four-passenger range of 4,018 nautical miles with reserves at long range cruise and is touted as the “farthest flying super-midsize jet.” It can fly 3,719 nautical miles at Mach 0.80 with four passengers and full fuel, and at altitudes up to 45,000 feet.

The jet is capable of nonstop flights between London and New York, São Paulo and Miami, or Dubai and London, and is configured with eight fully reclining seats that can double as four beds (which might be needed for such a journey.)

Rockwell Collins Pro Line Fusion avionics suites and turbulence-reduction technology are standard, and other enhanced systems are available. Deliveries of the model 600 are expected to begin “in the second quarter” of 2019 and the model 500 is expected to follow in the third quarter.

A Gulfstream G550 set an unofficial city-pair speed record powered by sustainable alternative jet fuel en route to EBACE on May 17. The journey connected Charleston, South Carolina, with Farnborough, England, a distance of 3,591 nm at an average speed of Mach 0.85 in 7 hours and 13 minutes, the aerospace manufacturer said.

Gulfstream and other business jet manufacturers are promoting the development and adoption of sustainable alternative jet fuel, which Gulfstream President Mark Burns said was “safe, approved, does not hinder aircraft performance and provides a long-term benefit to the environment.”

Gulfstream announced that its G600 ultralong-range jet was in the “final stage” of function and reliability flying required for the aircraft’s FAA type certification. The jet was designed with customer input and boasts an expected 6,500-nm cruise at Mach 0.85. When traveling at Mach 0.90 the G600 could make short work of a Geneva-to-Hong Kong flight and takes its place in the lineup with its 18-passenger G500 sister ship. 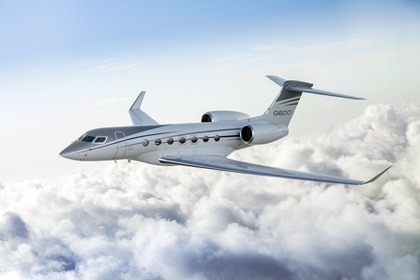 The jet has 14 windows; high-speed internet; satellite communications; and configurations that can accommodate up to four flexible areas for work, entertainment, dining, and rest.

In addition to the clean-sheet G600, the Savannah, Georgia, manufacturer brought a fleet of contenders to the EBACE static display ramp, including the company’s flagship G650ER, the high-performing G550, the super-midsize G280, and the new G500.

Honda Aircraft Co. announced plans to expand its Greensboro, North Carolina, global headquarters in July. The manufacturer will invest an additional $15.5 million in a new 82,000-square-foot HondaJet manufacturing facility on its 133-plus acre campus. The recently introduced five passenger/two crew HondaJet Elite is outfitted with Garmin G3000 avionics, and boasts a maximum cruise speed of 422 knots, a maximum altitude of 43,000 feet, and a range of 1,437 nm.

Textron Aviation showcased its first air ambulance configuration of the Citation Latitude. The aircraft was purchased by Babcock Scandinavian Air Ambulance for aeromedical operations in Norway and can be outfitted with a wide range of medical equipment. 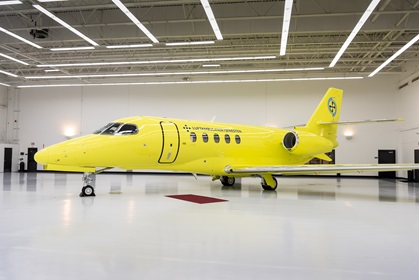 The flat-floor Citation Latitude has a four-passenger range of 2,700 nm at high-speed cruise and a takeoff field length of 3,580 feet. The manufacturer said the aircraft’s capability can help provide operators with “greater range out of short fields” and “an unrivaled cabin experience.”

Textron Aviation announced several milestones in its “clean-sheet design” Cessna SkyCourier twin utility turboprop that is designed to handle three standard air cargo containers with a payload up to 6,000 pounds—or up to 19 passengers—depending on configuration. 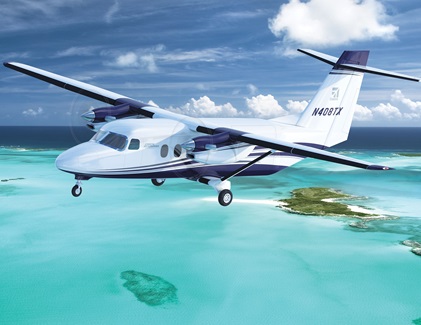 Assembly is underway for the prototype aircraft and five additional flight and ground test articles. Component testing for the new McCauley 110-inch propeller, nose landing gear, and fuel system are underway with testing to begin “later this month.” The aircraft will be powered by the Pratt and Whitney Canada PWC PT6A-65B 1,100-shp engine.

FedEx Express signed on in late 2017 as the launch customer for up to 100 aircraft, with an initial fleet order of 50 cargo aircraft and options for 50 more.

The company also recently completed component integration for the Denali “iron bird, a full systems simulator test rig laid out in the configuration and size of the Denali,” the company noted. The powerplant will be a GE-driven 1,300 shp Catalyst engine and a “state-of-the-art” 105-inch McCauley composite propeller. 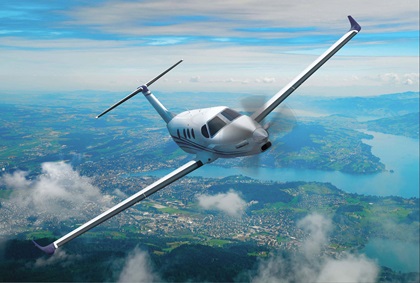 Chris Hearne, Textron Aviation senior vice president of engineering, said the aircraft was “designed and built to outperform the competition in capability, pilot interface, cabin experience and total ownership costs.” He also pointed out that the powerplant would bring reduced ownership costs by “meeting or exceeding performance expectations” by deploying new technology that “allows for a much longer time between overhaul, quieter operation.” He added that the “first-ever digital engine and propeller control” would reduce pilot workload and “have greater fuel efficiency than similar aircraft in its class.”

In other news, Textron Aviation said it plans to double its Düsseldorf, Germany-based European distribution center in 2019 to include “nearly 35,000 items” that will help to service Beechcraft, Cessna, and Hawker aircraft. The company said it leads the European market with more than 1,800 jet and turboprop aircraft operating in the region and intends to continue providing “unrivaled support” for aircraft operating worldwide.