Get the app Get the app
Already a member? Please login below for an enhanced experience. Not a member? Join today
News & Media Fly-In Livermore, California

Two days to experience, learn, and explore all things aviation. 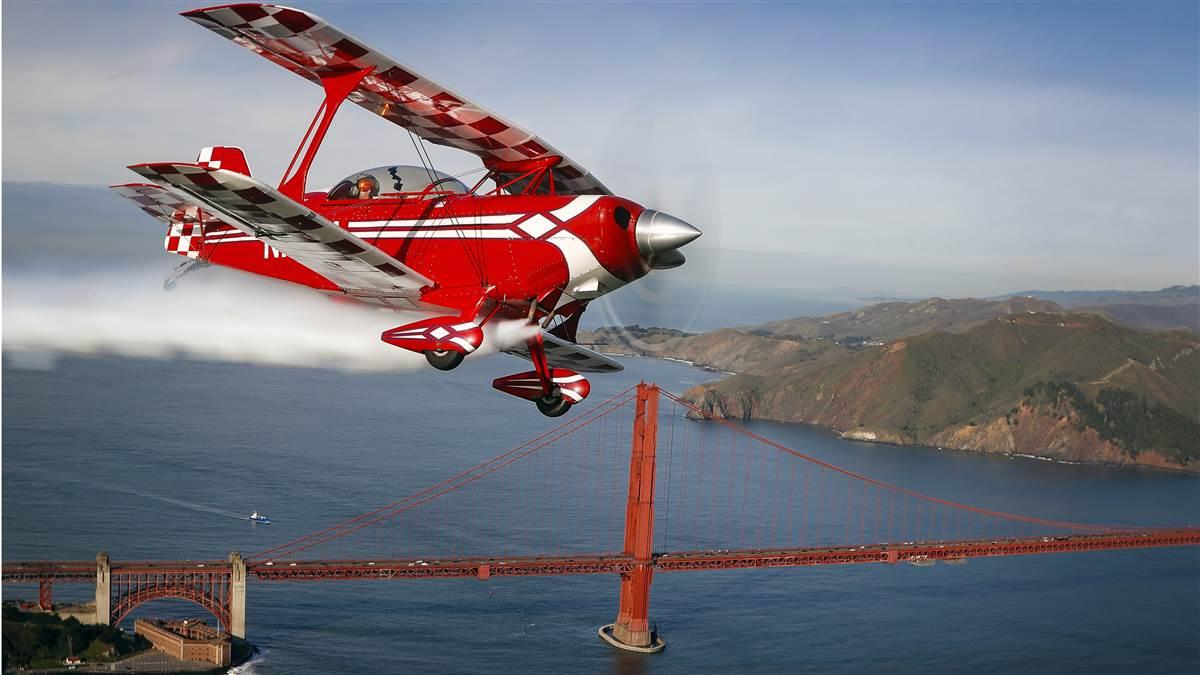 No wings required for these three flights! Take in the views of rolling hills covered in grapevines as you travel along the Livermore Valley Wine Country in our iconic trolley, listening to great music with a super-fun tour guide. Visit three top-rated wineries for a full flight of Livermore wine tasting at each and enjoy a custom-ordered deli-style lunch along the way.

Your Livermore Wine Trolley Tour all-inclusive price is $119 per person* *adults 21 and over • service fee and gratuity not included • no refunds • tickets transferrable • 21 days in advance notice for rescheduling consideration. 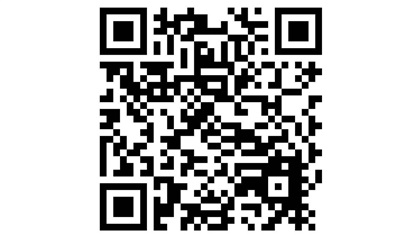 This code will take you to the current date. Once you scan in the code, you will need to scroll to June 2019 and the 21 will show on the calendar, and then click the date to make your reservation.

For more information on tours available during AOPA’s event in June, with pickup and drop-off from a convenient location in downtown Livermore, visit the Livermore Wine Trolley website.

Who knew? Everyone always talks about Napa and Sonoma when discussing California’s wine country, but quiet little Livermore is not only home to 55 wineries, it is also the home of California chardonnay. And by home, we mean where it began. Seems Charles Wetmore brought to his Livermore estate from France a chardonnay vine, cultivated it, and its grapes produced what we now know and drink as California chardonnay. The 1883 Wente vineyard and chateau is just one of the lovely and enchanting wineries in this northern California town, marked by rolling hills, Tuscan-style homes, gracious downtown streets, and a happy vibe.

AOPA will host its second 2019 fly-in at Livermore Municipal Airport (LVK) in June. Join us June 21 and 22 for another fine weekend of flying, camaraderie, education, and enjoyment—and try some great California wine while you’re here.

First, let’s talk about Livermore. So overshadowed by its famous sisters Napa and Sonoma, you’ve probably never heard of Livermore. It’s in the “Tri-Valley.” A region in eastern Alameda County an hour’s drive east from San Francisco, Oakland, and San Jose, the Tri-Valley is made up of four communities—Danville, Dublin, Pleasanton, and Livermore—which are situated in the Amador, Livermore, and San Ramon valleys. As California’s oldest wine-growing region, Livermore is a world-class wine destination but is also famous for the Lawrence Livermore National Laboratory, a premier nuclear and security research center, and for Sandia National Laboratories, which grew from the Manhattan Project. The San Francisco Premium Outlets offers more than 180 luxury brand-name and high-end stores and is an exciting destination for shoppers.

If you’re flying in for the weekend, take advantage of BART—Bay Area Rapid Transit—to easily get from the Tri-Valley area into San Francisco and enjoy the many exciting sites there. Visit Alcatraz, eat Ghirardelli chocolate, traverse the Golden Gate Bridge, and see the Walt Disney Museum.

Volunteers needed! Join us to help in many ways
www.aopa.org/fly-ins/lvk

Things to do in Livermore

25 Things to do in Livermore 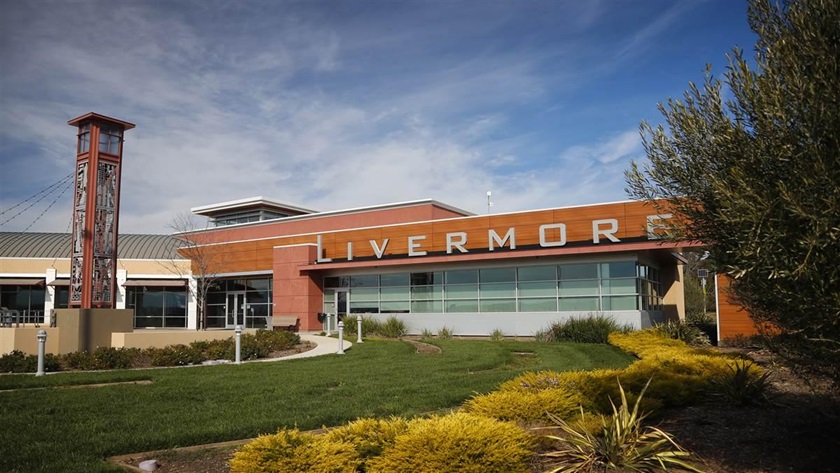 STRONG AVIATION COMMUNITY.
LVK is a great place to fly

Livermore Municipal Airport is a city-owned property on 643 acres. It boasts a beautiful, architecturally pleasing terminal flanked by Five Rivers Aviation, an FBO and AOPA host, owned by Pete Sandhu. “We have a strong aviation community here,” says Sandhu. In addition to Five Rivers, there’s also Attitude Aviation, and flight schools ATP, Red Sky, and Flying Particles, as well as Bay Area Flying Club, and  Jato Aviation. There are more than 500 based aircraft and 392 hangars. LVK is a reliever airport for the Bay Area and is home to many aviation-related businesses. An airfield existed in Livermore as early as 1929. During World War II, the U.S. Navy used the field. It became Livermore Sky Ranch in 1953 and was purchased by the city. That land was deemed more useful as residential property, so the current site of Livermore Municipal Airport was opened in 1965. The 8,400-square-foot terminal building was built in 2015. A new restaurant will be open in the building by June. Livermore has two parallel runways. Runway 7L/25R is 5,253 feet long and 7R/25L is 2,699 feet long. 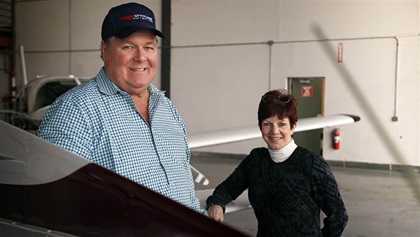 Since 1997, Attitude Aviation has been a fixture on the Livermore field, offering instruction in tailwheel aircraft and aerobatics. Sam Rivinius purchased Attitude in 2016 and has continued to expand on the FBO’s full-service mantra: the best flying experience anywhere. Attitude is on the east side of the field. Stop in and say hi to Sam and his able assistant Judy Shezifi. 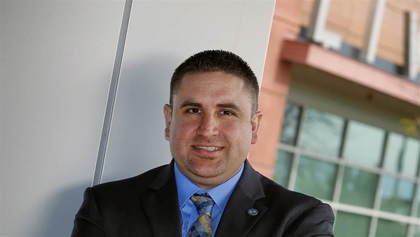 “On behalf of the City of Livermore, I would like to say how enthusiastic we are to host an AOPA Fly-In for 2019. General aviation is an integral part of the Tri-Valley—what better way to display it than hosting an AOPA Fly-In.” 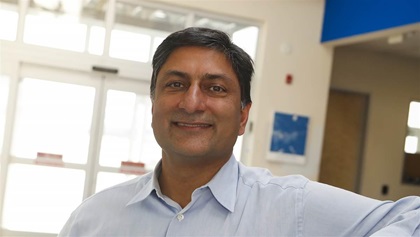 “We are thrilled to be chosen as a host location for the AOPA Fly-In. The airport is buzzing with excitement and volunteers are eager to participate. It’s wonderful to have an event that rallies the whole area.” 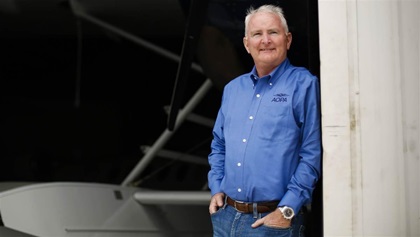 will host two Pilot Town Hall meetings during the two-day event. Each day Baker will update members and visitors on the work of the association, answer questions, and share his piloting life. Pilot Town Hall takes place Friday and Saturday 11 a.m. to 11:45 a.m. 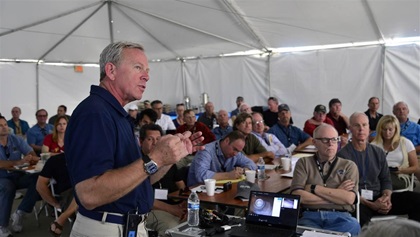 After adopting the two-day format in 2017, and continuing into 2018 and 2019, AOPA is building out each day’s events with seminars and ground school workshops. At the fly-in, you’ll find plenty of focused workshops and dynamic seminars led by some of the greatest experts and voices in aviation. AOPA is expanding its educational content with the AOPA Air Safety Institute’s Ground School Workshops, which are focused learning opportunities with endorsements that apply to the Focused Flight Review (fees apply). Not to be confused with our free seminars, these in-depth learning experiences provide a professional level of education, offered in two, three-hour sessions both Friday and Saturday. You receive logbook endorsement for three hours of ground training, as well as Wings credit. Meanwhile, our free 45-minute seminars are the core of the AOPA Fly-In experience. Choose from more than two dozen topics sure to help add new experiences to your logbook with confidence and competency. Leave the fly-in a safer, better pilot while you connect and develop friendships with other aviators. 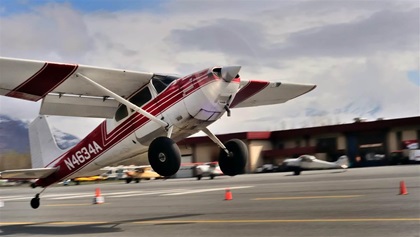 At each AOPA Fly-In this year the fun backcountry sport of short takeoff and landing contests will be a highlight. With the assistance of Texas wrangler Jimmy Gist, AOPA will host a STOL Invitational on the field. The first-ever STOL Invitational at Livermore Municipal Airport will take place Friday evening and Saturday at noon with Gist masterminding the activity. Gist, a former U.S. Air Force fighter pilot, calls STOL competitions “the aviation equivalent of four-wheeling.” Tailwheel aircraft with big tires and pilots with big ideas take off and land in short distances just like they have to do in rugged places like Alaska and the backcountry. The shorter the hop, the better. It’s all in friendly competition, and it showcases lightweight, fun aircraft such as Cubs and Experimental types (stay tuned: there may be some heavier iron in the competition too, such as a Quest Kodiak or Pilatus PC–12). Bleachers will be set up for viewing the competition, and we’ll fire up the grill and serve hot dogs and burgers and some craft beer.

Special events are being planned to include a Short Takeoff and Landing (STOL) Invitational Competition to showcase the skills and aircraft of backcountry flying, a nighttime drone show, an engaging Friday night flightline cookout, and several fly-outs to nearby aviation attractions. “This year’s AOPA Fly-Ins have added some really neat dynamics that we believe will inspire you to be a better, safer pilot, as well as connect you to new friends in aviation, expand your horizons, and visit some amazing locations,” said Chris Eads, AOPA senior director of Outreach and Events. 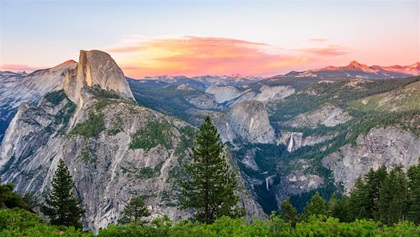 Join us to fly from Livermore Municipal Airport (LVK) to Mariposa-Yosemite Airport (MPI) on Friday, June 21. We’ll take off for a scenic tour over one of the nation’s greatest national parks. See breathtaking waterfalls, granite masterpieces, and amazing vistas as we fly in a convoy over the Yosemite Valley and the Mariposa Grove of Giant Sequoias. At Mariposa we will tour cool and interesting shops, enjoy lunch, and then join back up to return to Livermore. Check online for more details.

Sneak Peek.
Behind the Scenes Tour 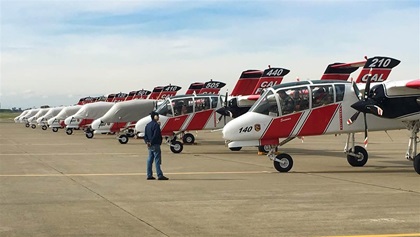 Since 1985, the California Department of Forestry and Fire Protection (CalFire) and DynCorp International have protected California from forest fires. Located at historic McClellan Air Force Base, CalFire/DynCorp is considered one of the finest and most effective aerial firefighting operations in the world. On Friday, June 21 you can join AOPA for a behind-the-scenes tour of this amazing operation. You’ll also see the Aerospace Museum of California, which has more than 40 military and civilian aircraft on display as well as a world-class engine exhibit. Attendees will also visit U.S. Coast Guard Air Station Sacramento, where Alenia C–27J Spartans perform search and rescue operations. Space is limited and reqistration is required. Check online.