Get the app Get the app
AOPA will be closed on Friday, July 3, 2020, in observance of Independence Day.
Already a member? Please login below for an enhanced experience. Not a member? Join today
News & Videos AOPA, FAA experts discuss ADS-B in webinar

What constraints on access to airspace will pilots flying without ADS-B Out face after the January 1, 2020, mandate to equip with ADS-B takes effect? 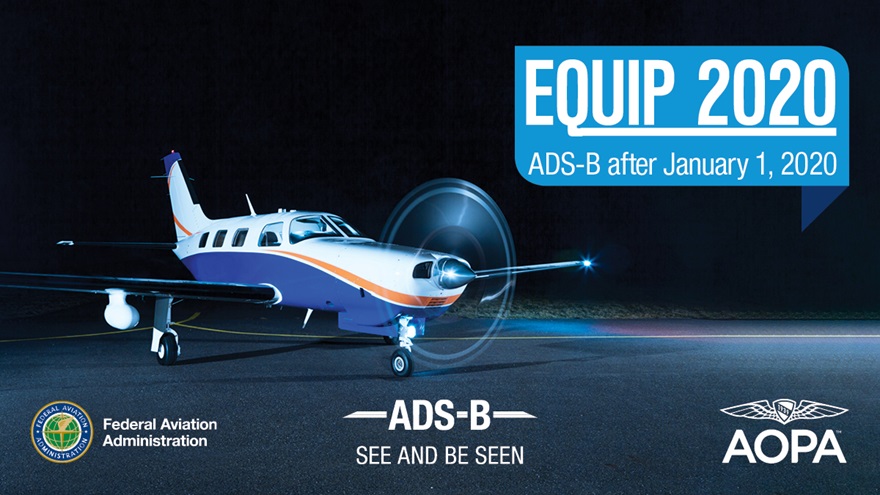 Image courtesy of the FAA.

Those limitations—and a few exceptions, waivers, and deviations—will be the subjects of a December 10 webinar to be streamed live from AOPA headquarters at 6 p.m. Eastern time.

Join AOPA Technical Editor Mike Collins, AOPA Senior Director of Airspace and Air Traffic Rune Duke, FAA Deputy Director of Surveillance Services David Gray, and FAA Air Traffic Control Specialist Kerri Strnad of the Air Traffic Procedures office during the “Equip 2020: What’s Next for ADS-B after January 1, 2020” webinar for a discussion of the ADS-B Out mandate and a live round of answers to questions sent by text.

Much information has been presented to get aircraft operators ready for the approaching mandate, but this program will be looking at 2020 from a different perspective.

“We will be talking about non-equipped aircraft, not how to get equipped,” said Duke. “This is a conversation about the waivers, exemptions, deviations, and authorizations that will be needed for flying into ADS-B-required airspace without ADS-B equipment.”

The show will open with an introduction to the ADS-B mandate, including an overview of the airspace where and when the rule to fly with an approved ADS-B Out unit will apply.

The rule’s various implications for operating in airspace such as the air defense identification zone, in airspace reserved by temporary flight restrictions, and in cross-border operations will be addressed.

To help viewers become fully informed, FAR 91.225(f) will be reviewed: It’s the regulation that requires pilots who do fly ADS-B Out-equipped aircraft to operate the equipment in “transmit mode” at all times unless advised otherwise by air traffic control (such as aircraft conducting formation flights).

The importance of careful preflight planning will be highlighted: For example, an IFR flight in a non-ADS-B-equipped aircraft should be planned to ensure that the route does not penetrate rule airspace.

The next update of the Aeronautical Information Manual will be published in January and will include a wealth of helpful information about ADS-B, Duke said.

The panelists will discuss privacy options for ADS-B users including the program recently announced by the FAA that allows operators of aircraft equipped with ADS-B Out using 1090-MHz Extended Squitter (Mode S transponder) technology to opt out of ADS-B flight tracking.

ATC authorizations to fly into rule airspace in non-equipped aircraft must be requested in advance, and come in two varieties: One-time authorizations under the ADAPT program (those issued with the automated ADS-B Deviation Authorization Preflight Tool) and long-term authorizations that must be acquired through letters of agreement with the ATC facility involved.

Pilots of non-equipped aircraft without authorizations are cautioned that they will be held responsible for advising ATC if they are unable to comply with in-flight instructions that would take them inside rule airspace.

Such “ATC-directed violations” must be avoided, but there are some steps that can be followed to mitigate an inadvertent violation, according to the guidance to be published in the new edition of the AIM.

“We will discuss the nuances of this scenario, and the new AIM guidance,” Duke said.