Get the app Get the app
Get the latest news on coronavirus impacts on general aviation, including what AOPA is doing to protect GA, event cancellations, advice for pilots to protect themselves, and more. Read More
Already a member? Please login below for an enhanced experience. Not a member? Join today
News & Videos King Air court gathers in Texas

Billed as the largest gathering of Beechcraft King Airs in the world, the King Air Gathering in Fredericksburg, Texas, lived up to the hype. 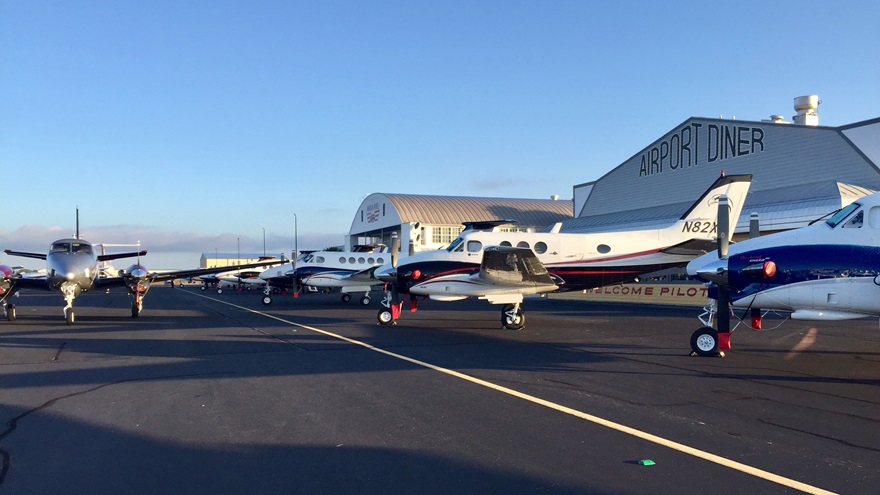 The King Air Gathering, held September 26 to 29, drew more than 40 King Air aircraft and more than 100 owners and guests to Fredericksburg, Texas. Photo by Thomas B. Haines.

The September 26 to 29 event drew more than 40 of the endearing turboprop twins. In continuous production for 55 years, the original Model 65-90 has spawned dozens of permutations, many of which have been heavily modified by companies such as Gathering sponsor Blackhawk Aerospace, and nearly all of which were represented during the three-day event at Gillespie County Airport. More than 100 owners and guests checked in to the famed Hangar Hotel, located right on the field, with the event housed in the conference center in the large hangar next to the hangar-themed hotel.

The Gathering is produced by the King Air Academy, the Phoenix-based company that specializes in training King Air pilots.

While there are social components to the Gathering, it is primarily a training event, with the agenda packed with quality speakers covering subjects ranging from the cognitive challenges of rapid decision making to the principles of datalink nexrad.

Dr. Kenneth Stahl, a frequent medical content contributor to AOPA’s Pilot Protection Services online resources, spoke to the group about his experience in dealing with catastrophic medical injuries and decision making under fire during the Iraq War, and how lessons learned there can be applied in the cockpit when things start to go wrong. One bit of advice: Deep breaths. “They really work,” he said. The big intake of oxygen increases blood return to the heart, clearing stress chemicals from your bloodstream and sharpening your cognitive abilities. Want to dial it up more? Roll your eyes back in your head while taking that big breath. That can help slow rapid brain wave activity, relaxing you and giving you a chance to concentrate, which may help you overcome the task saturation that can occur when emergencies arise in the airplane.

King Air owner Dr. David Strahle provided an entire afternoon of education on the nuances of datalink weather and ways to leverage it for safe flight.

Beechcraft and Pratt & Whitney were among the other supporters who shared product updates and operational tips.

AOPA President Mark Baker updated the group on AOPA’s advocacy efforts to increase transparency related to fixed-base operator (FBO) and airport fees. Responding to some 1,400 complaints from pilots surprised by unexpected and high fees at FBOs, AOPA has worked over the past couple of years to provide tools to make it easier for FBOs to share their fees. Some 300 FBOs are already using the revised AOPA Airport Directory online to post their fees, making it easy for pilots to know what they are facing when they head for a particular airport. Additional FBOs are signing up daily.

AOPA Foundation Vice President Jennifer Storm thanked attendees for their support in helping to meet the James C. Ray Foundation challenge grant, which resulted in some $5.3 million to help the Foundation support the AOPA You Can Fly initiatives designed to get people into aviation and keep pilots flying.

King Air Academy manager and co-founder Kevin Carson said the Texas event was the company’s third annual gathering, with next year’s Gathering already set for August 27 through 30 at the Beech Factory Airport in Wichita, Kansas.

Academy co-founder Ron McCalister said the events are like bringing family together: “We all care about the same things. This year the theme is safety—something that resonates with every owner. We’re pleased to see such a wide variety of models here and happy the owners take the time to come learn more about how to safely operate them.”

Editor in Chief
AOPA Editor in Chief Tom Haines joined AOPA in 1988. He owns and flies a Beechcraft A36 Bonanza. Since soloing at 16 and earning a private pilot certificate at 17, he has flown more than 100 models of general aviation airplanes.
Go to Thomas B Haines's Profile
Topics: Turbine Aircraft, Events