Get the app Get the app
Already a member? Please login below for an enhanced experience. Not a member? Join today
News & Videos A hard day to be a chicken

Editor's note: This article was updated October 4 to correct the spelling of winner Joe Czachorowski's name.

It isn’t easy being a chicken. Just ask Zeke Przygocki.

If kids were attracted to aviation in September at Easton Airport Day in Easton, Maryland, attended by 3,000 people, you can thank Captain Peeps—his official title for the day. He was the target of efforts by 29 pilots to pelt him with rubber chickens from their aircraft.

The pilots had just completed a formation flying clinic taught by the Redstar Pilots Association. Now, taking careful aim at Przygocki with a hapless rubber chicken was their prize. Przygocki was protected by a chicken suit, and the fact that it is prohibitively difficult to accurately deploy a rubber chicken from a fixed-wing aircraft in flight.

Until that day Przygocki’s career had been on an upward spiral, graduating with a degree in criminology before commanding an Air Force C–5 Galaxy crew, followed by his current career as the captain of an Airbus A320 for United Airlines. Just after that career apogee came the job of sweating buckets in a chicken suit. That was followed by children throwing marshmallow Peeps at him—thus, his title.

Remember, if you seek an airline career, you, too could end up in a hot furry chicken suit with a target on your back.

“I want to see the chickens drop,” said one little boy at the show on Maryland’s Eastern Shore. “Do they put them in bombs?”

No, they dress the rubber chickens in capes, and sometimes makeup, since many of the bombardiers are women, or release them from missile-like tubes powered by the wind. No pilot hit the pickup truck bed from which Captain Peeps taunted the contestants.

Competition among the pilots who flew four different models of aircraft appears to be good-natured, although there is room for doubt. Winner Joe “Zach” Czachorowski got his rubber chicken closest to the pickup truck while flying his Van’s Aircraft RV kitplane. 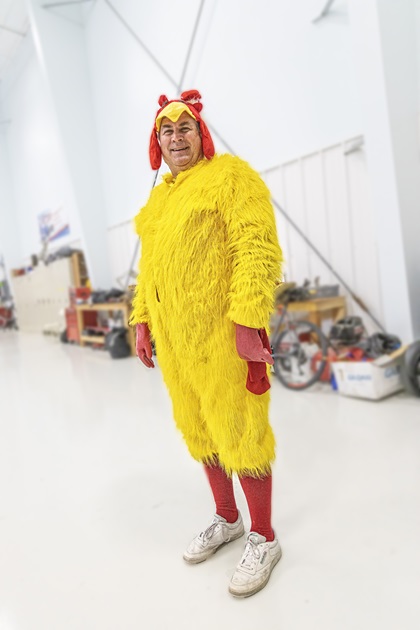 “We used to laugh at the RVs,” said Redstar Pilots Association “Judge” Carey O’Donnell. The pilots first entertained the crowd with a mass formation using their newly attained skills before breaking off to put Przygocki in their sights.

The judge was not at all happy with the RV win, which brings us back to the question about the “good-natured” competition. “The T–6 guys hate the T–34 guys who hate the RV guys who hate the Yaks who hate the Epsilons,” he said. Nanchang CJs and North American T–6 Texans, two of the aircraft at Easton, could be characterized as brutish school bullies to the RVs’ straight-A students and teacher’s pets. The appearance of the two aircraft bears out the comparison. RVs are clean little aircraft that couldn’t roar even if the engine needed a tune-up, but CJs and T–6 Texans awaken angry and stay that way, no showers or deodorant, spitting black oil onto their already grimy bellies—and liking it.

The final model flown at Easton was the Socata TB30 Epsilon military trainer that seemed to have escaped peer insults as had the Beechcraft T–34 Mentor.

About that “judge” title: The only place O’Donnell ever acts as a judge is at the Redstar Kangaroo Court, which adjudicates unfounded accusations against its formation students for piloting infractions imagined or real—mostly imagined. All are found guilty just the same at a closing night banquet. To ensure honesty, the accused are required to take a sip of high-octane malt beer “truth serum” before testifying. There are fines to be paid, but lower fines for the winner of the chicken drop. That and bragging rights, a “huge benefit with this crowd,” O’Donnell says, are the only prizes. The group also happily humiliates the worst chicken bomber in the group, which for 2019 was Jim Daris flying a Nanchang CJ–6 that landed with the clever rubber chicken avoiding its plunge by catching a ride on the tail.

An event that draws 3,000 people is useful for another purpose: education. Airport Manager Michah Risher said his Aviation Career Education (ACE) program has drawn 100 students to its classes in air traffic control, drones, aviation maintenance, and pilot training. ACE officials had a display at the event. The chicken drop wasn’t the only event that drew a crowd. Car museums and automobile clubs displayed customized classic cars while local pilots displayed and flew antique aircraft. The airshow lasted more than an hour. Even when it was over some of the crowd remained to watch the takeoff of a Fairchild Republic A–10 Thunderbolt (Warthog).

Retired U.S. Army Col. William A. DeShields, a member of the Tuskegee Airmen, found attendees seeking him out in the Easton terminal building to hear of his exploits flying a Cessna L–19 Bird Dog for artillery spotting in Korea and later in Vietnam. Former U.S. Navy pilot Chris Demay of Annapolis, who flew the Northrop Grumman EA–6B and became a McDonnell Douglas F/A–18 test pilot, made sure his daughters Bela, 3, and Dara, 5, got to meet DeShields. DeShields, founder of the Black Military History Institute in Royal Oak, Maryland, hopes they will carry the story of the Tuskegee Airmen forward.

Also in the crowd was Bridget O’Toole, who can also testify to the dangers of being a chicken. In the 1970s she wore a chicken suit with real feathers for a chicken industry event at the county agriculture and event center in Easton. She walked into the event where the temperature was 100 degrees Fahrenheit and promptly fainted, appearing in the Easton paper as the “dead chicken” of the event.

No, it’s not easy being a chicken. 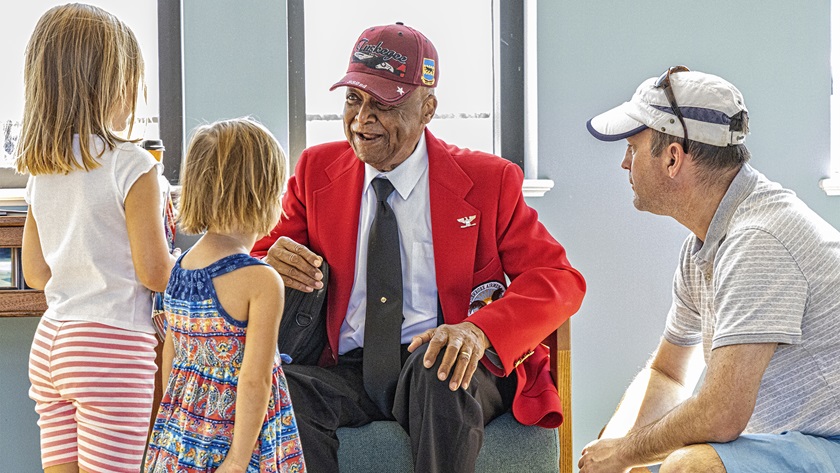