Get the app Get the app
Already a member? Please login below for an enhanced experience. Not a member? Join today
News & Videos Earth-to-Moon flight challenges instructors

The annual Redbird Migration for flight training professionals included a challenge that was almost out of this world. Organizers asked certificated flight instructors and other aviation educators to plan a flight from Earth, Texas, to Moon, Pennsylvania, but only two of the three-person flight crew could land and all three had to fly at least 90 percent of the journey.

The conundrum stumped many of the more than 300 who registered for three days of breakout sessions, guest speakers, and socializing at the Wings Over the Rockies Air and Space Museum's Boeing Blue Sky Aviation Gallery at Centennial Airport in the Denver suburb of Englewood, Colorado.

Redbird patriarch Jerry Gregoire said the annual Redbird Challenge is popular among attendees because it encourages them to meet new people, pool their talents, and solve problems as a group. The exchange of ideas often leads to new friendships among peers. The team of Albert Glenn, Chris Erlanson, Hal Frary, and Michael Phillips took home the Challenge win with a bizarre flight itinerary that miraculously came in under budget and on time.

A highlight of the networking and learning event October 16 were the 2019 AOPA Flight Training Experience Awards that honored the nation’s best aviation schools and instructors. AeroVenture Flight Center, a family-run operation at Mansfield Municipal Airport in Mansfield, Massachusetts, was recognized as the best flight school, and MIL2ATP flight instructor Christopher Kreske, from Wayne Executive Jetport in Goldsboro, North Carolina, was recognized as the best CFI. 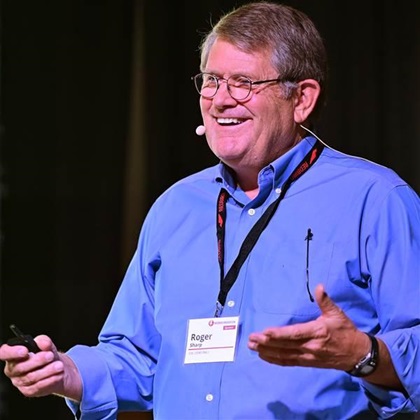 Retired U.S. Air Force Col. Roger Sharp, a designated pilot examiner and a popular speaker, delivered the October 15 keynote with a topic he described as “stupid instructor stuff” gleaned from failed checkride candidates. Sharp entertained with humorous but poignant stories that he said were based on students’ lack of understanding of basic aviation terms and analytical functions “because CFIs don’t know how to do it for themselves.”

The topic of rushed flight instruction and teaching concepts—specifically to pass an FAA examination without understanding the material—was repeated during additional presentations.

Commercial airline pilot, author, and professor of aviation science Erika Armstrong said multiple-choice tests favored by the FAA and other entities are “not the way to do it” if candidates really want to learn and understand training material. During an afternoon keynote October 16, Armstrong said the human brain is a complex system that performs differently under the stress of an emergency faced in a cockpit environment than it does inside a flight simulator, “and sometimes that is the difference between life and death.” 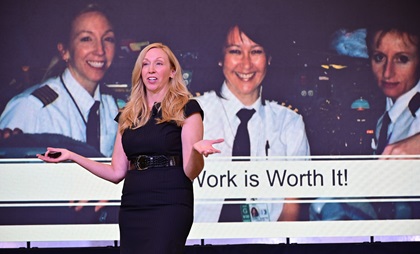 A “Rumble in the Rockies” matchup pitted AOPA Pilot Editor at Large Dave Hirschman against Belvoir Media Group Executive Editor and AVweb Editor at Large Paul Bertorelli and delighted attendees during a bull-headed point-counterpoint face-off that touched on cockpit technology, appropriate training aircraft, the use of flight simulators, and other subjects they rarely agreed on.

“It’s genetic, but it’s also economic,” explained Bertorelli to address the decreasing number of pilots taking to the skies in the last decade. “I’m not optimistic or pessimistic, I’m a realist,” he declared.

“I think the fascination mankind has for flight is always there,” countered Hirschman, who went on to lament the high price of general aviation training aircraft and accompanying flight lessons that have turned many away from their aviation dreams. “A million dollars for a piston single—are you kidding me?” he asked. “But a friend of mine bought a really cherry Cessna 140 the other week for $20,000 so there are ways to do it.”

Both aviation stalwarts agreed that the “1,500-hour rule” for flight time required of first officers flying commercial airliners was pointless. Prior to 2013 pilots could advance to the right seat of an airline with only 250 hours. The extra time they must now log is a financial strain that some experts say has contributed to the current pilot shortage.

Boeing Global Services Vice President William Ampofo delivered the morning keynote and said the aircraft manufacturer is “doing some amazing things” in the GA world, which included the 2019 acquisition of ForeFlight, the portable mapping solution that allows increased situation awareness for many GA pilots. He concurred that the aviation industry is facing a severe shortage of pilots, technicians, and cabin crew members. “There is a huge need throughout the world for pilots,” he said and reiterated the need for 804,000 pilots, 769,000 technicians, and 914,000 cabin crew members in the next 20 years. “Eight hundred and four thousand pilots—think about it—that’s roughly 40,000 pilots a year.”

Mike Biewenga, the 2018 AOPA national best flight instructor, said business was booming at his Lake of the Hills Airport near Chicago. “It’s been crazy ever since last year” when he was recognized for his dedication and encouragement, but the award was a double-edged sword. “I was already 200 percent over-booked but now it’s more like 300 to 400 percent.”

Flight instructor Brian Morgan of Premier Flight Center in Springfield, Missouri, who is also a designated pilot examiner, has attended five of the nine Redbird Migrations. He complimented the learning format and variety of breakout sessions “including learning about certain paradigms—and knowing that you can break them” when warranted. “The new ideas get you out of that tunnel-vision mentality and it opens you up to different perspectives,” he added. “It really helps to see how you are comparing to others in the industry.” 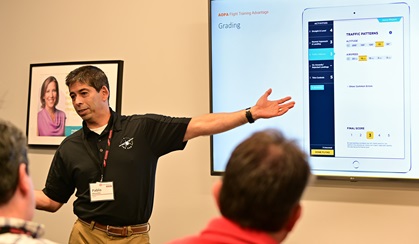 The web-based adaptive training system includes a dashboard portal for students, flight instructors, and flight school owners. Instructors can use click boxes on an iPad to track flight skills that have been tackled successfully and note which skills need more work. “We’re trying to create a friend in the cockpit to make training easier,” said West. “We aren’t trying to take away anything the instructor might add because they are still driving this training,” he emphasized.

Elizabeth Tennyson, AOPA You Can Fly executive director, noted the initiative is “entirely donor funded and money for development does not come from AOPA dues. “Our goal is not to make a profit. It’s about being able to invest back into the application to add the features that people will want in the future.”